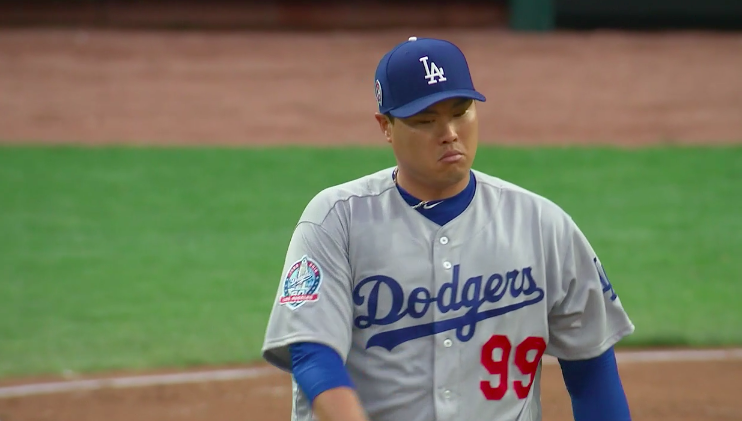 With last night’s disappointing end to another World Series, it’s time to look forward to the offseason, which hopes (promises?) to be much more active than the last. Let’s see how it all breaks down.

The Dodgers have an exclusive 5-day negotiating window to sign these players for the five days after the World Series ended. After that, they’re free to sign with whichever team they so choose.

Machado is the big name here. He, along with Axford, Dozier and Madson, cannot be extended the qualifying offer ($17.9 million) since they were acquired after the start of the season. And yes, there’s no way anyone but Machado (of that quartet) would get the offer.

Of the other three free agents, two of them could get the QO: Grandal and Ryu. Grandal, despite a putrid postseason, is still one of the best offensive catchers in the game and an elite framer. Even with a QO, he should still get a multi-year offer on the open market. I don’t think he comes back to LA unless he accepts the QO.

Ryu is an interesting one. He had the best numbers of any Dodger starter in 2018, but he also comes with a long list of injury concerns. Thankfully, he only missed time this season due to a lower-body injury, so that might actually play a bit in his favor. If he were to accept the QO, that’d be great. But with the lack of starting pitching seemingly available always, you gotta think he declines and tests the market. Ryu is a guy I could see this front office bringing back on a 2- or 3-year deal worth as much as the QO (or maybe a bit more).

Freese has been predictably great in the postseason and having a guy like him — especially with a team that likes to play matchups as much as possible — would be great to have on the bench. His option is an easy pickup for me (ends up being a $5.5 million decision). If he’s going to be the “new Chase Utley,” Utley was re-signed after the 2016 season at $7 million, so $6 million for Freese seems well within reason.

And now we get to the big one. Kershaw is under contract for two more years, but he has the ability to opt out and become a free agent, per the terms of his contract. It is widely believed that he will, and he probably should. Going into his age-31 season, he should be able to score a 3-4 year deal worth close to $30 million. Despite his “struggles” in 2018 and the postseason narrative that won’t die (mostly because of his doing), he still had the 7th-best ERA (among pitchers with 160 or more innings pitched), 12th-best FIP and 16th-best K-BB%. Most pitchers would kill to “struggle” like that. Perhaps the Dodgers work out a contract extension in the next five days to keep the future Hall of Famer in a Dodger uniform for the foreseeable future. If he does opt-out, the Dodgers can and will extend him the qualifying offer.

If Grandal, Kershaw and Ryu all turn down the QO and they go onto sign elsewhere, the Dodgers would receive three compensatory draft picks after Comp Round B (generally around picks 75-80) of the 2019 MLB Draft.

First off, Utley is retiring, so he’ll be off the books (and the roster). Hill and Kemp are going into the final year of their respective deals, and Jansen has an opt-out after the 2019 season. Turner has two more years, while Maeda has five years remaining on his deal. It remains to be seen how the Dodgers use Maeda going forward. After a subpar showing in the bullpen since the move there, it wouldn’t be surprising to see him move back into the rotation to begin next season.

I examined this group of arbitration-eligible players almost three weeks ago. The numbers listed above are the projected arbitration numbers from MLB Trade Rumors.

This is technically Puig’s first year of arbitration, as he had played under his original 7-year, $42 million deal until now. He doesn’t have enough MLB service time to become a free agent, which is why he’s here.

Don’t expect all 13 of these guys to return in 2019. Wood and Pederson seem like prime trade candidates, while guys like Fields, Koehler, Goeddel and Rosscup are non-tender candidates, especially if the Dodgers need the roster spots. I could see a guy like Koehler coming back on a minor-league deal, as the front office envisioned him as a solid bullpen piece before he hurt his shoulder. The other three probably wouldn’t be missed. I’m, admittedly, lower on Fields than most, but I think that money and roster spot could be utilized a lot better this winter.

These are the players with fewer than three years of service time who were already on the 40-man roster. To remove them now would require them being designated for assignment, traded or outright released.

There are definitely some DFA candidates among this bunch: Chargois, Gale, Locastro, Stewart, Venditte. If the Dodgers need 40-man roster spots, they could be among the first to go.

Here’s how the 40-man roster breaks down right now:

That’s 39 players, not counting the seven free agents. A spot gets freed up with Utley’s pending retirement, so now they’re at 38. With a (hopefully) unencumbered winter, payroll-wise, there will be some moves.

There will also be moves because the Dodgers have more players than usual that they must consider protecting who are eligible for December’s Rule 5 Draft. Here are the rules for the Rule 5 Draft.

Last year, the Dodgers added Trevor Oaks and Dennis Santana to the 40-man roster. This year, the decisions are going to be a lot tougher than in years past.

There could be as many as seven players listed above who might need to be protected from the Rule 5 Draft. The easy, no doubt protection is Ruiz. Alvarez and Rios seem pretty likely. After that, you could make an argument either way for Beaty, Jackson, Joe and/or Sborz. Don’t think anyone else gets the nod. I’ll have a post breaking this down in more detail next week. But if they need to add at least three, then there are going to be some guys who are either traded or non-tendered, because we think the Dodgers are going to be active in the free agent market this winter and the 40-man roster spots will be needed to bring in new players.

The state of the roster is still really good. There are some big-name free agents (and a potential opt-out) the Dodgers would have to replace, but they have the budget to do so this winter. Couple that with a strong developmental system and two 1st-round draft picks in June’s draft (unless they sign Bryce Harper or another QO free agent), the future is still relatively bright for the Dodgers … in spite of the way the season ended.

It should be a busy winter.

Dustin Nosler began writing about the Dodgers in July 2009 at his blog, Feelin' Kinda Blue. He co-hosted a weekly podcast with Jared Massey called Dugout Blues. He was a contributor/editor at The Hardball Times and True Blue LA. He graduated from California State University, Sacramento, with his bachelor’s degree in journalism and a minor in digital media. While at CSUS, he worked for the student-run newspaper The State Hornet for three years, culminating with a 1-year term as editor-in-chief. He resides in Stockton, Calif.
@DustinNosler
Previous Red Sox 5, Dodgers 1 – World Series Game 5: Losers again
Next Looking at potential second base options for the Dodgers