A.J. Burnett Makes Sense For The Dodgers, But He Probably Won’t Play For Them

Now that Masahiro Tanaka has signed, the free agent starting pitcher market is finally starting to move. Matt Garza signed with the Brewers this weekend, and rumors are starting to pick up around Ervin Santana and Ubaldo Jimenez. However, all has been quiet in the world of A.J. Burnett. The speculation has been that Burnett would either return to the Pirates or retire. That changed this afternoon:

Burnett was traded to the Pirates in 2012 after two consecutive down seasons with the Yankees. While in Pittsburgh, he significantly changed his pitching style, increasing the usage of his sinker dramatically: 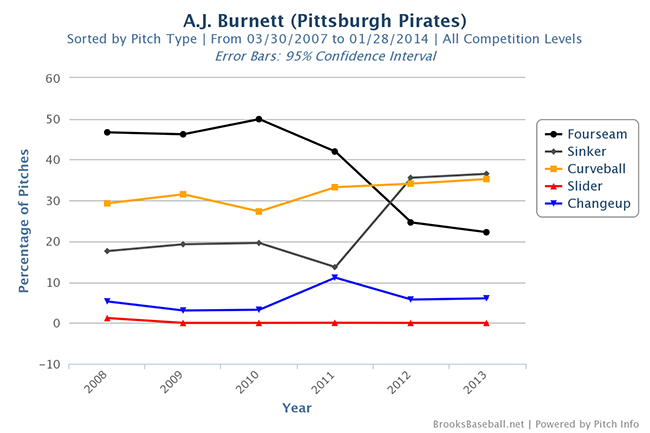 This change paid immediate dividends. After a good 2012, he was even better in 2013, striking out 9.85 batters per nine innings (fourth best in the majors) and inducing a ground ball rate of 56.5% (second highest in majors).

How does Burnett stack up with the rest of the market? Below is a quick comparison of some remaining free agent pitchers over the past two seasons. The Dodgers have been connected to Santana and Bronson Arroyo, and Jimenez is still available.

Using the last two seasons skews the data in Burnett’s favor (both Jimenez and Santana had down years in 2012 and decent seasons in 2013), but it’s pretty clear why he’d be an attractive alternative to the rest of the free agent market. Additionally, the Pirates did not give Burnett a qualifying offer, which seems like both a foolish decision and another example of how the qualifying offer system hurts small market teams. This means that signing Burnett would not require a team to give up their first round draft pick.

In theory, signing Burnett would make perfect sense for the Dodgers. Josh Beckett‘s future is questionable, and rumors have connected them to both Arroyo and Santana. The sourcing of these rumors are suspect (agents have incentive to connect their players to large market teams), but the Dodgers might desire a short-term upgrade in the rotation while Zach Lee gets another year of development time in the minors.

The Dodgers have been hesitant to give up a draft pick under the new collective bargaining agreement system, and Burnett doesn’t carry that additional cost. Since Burnett turned 37 this month, he could probably be signed to a short-term deal. Bartolo Colon‘s two year, twenty million dollar deal with the Mets seems like a reasonable framework for a deal for Burnett. Burnett might get a higher average annual value due to his young age, but the length of the contract is probably the higher priority for the Dodgers.

All of the pieces fit, but Burnett probably won’t sign for the Dodgers. His wife is famously afraid of flying, and their home is in Maryland. The Orioles and Phillies are the most likely fits if he doesn’t re-sign with the Pirates. Additionally, Burnett had a full no-trade clause with the Yankees and turned down a trade to the Angels in 2012, so he probably doesn’t want to play in the LA area to begin with. It’s possible that the Dodgers could blow Burnett away with a much larger contract than what other teams are willing to offer, but that seems fairly unlikely given Burnett’s age and the fact that the Dodgers don’t necessarily need another starting pitcher. It’s fun to dream of Burnett in the Dodgers’ already outstanding rotation, though. Besides, he’d break the pattern of the Dodgers employing pitchers who can also hit.

Daniel Brim grew up in the Los Angeles area but doesn't live there anymore. He still watches the Dodgers and writes about them sometimes.
@danielbrim
Previous Pitcher Hitting – The Dodgers’ Secret Weapon?
Next Clutchitude: The Most Clutch Plays Of The 2013 Dodgers Season