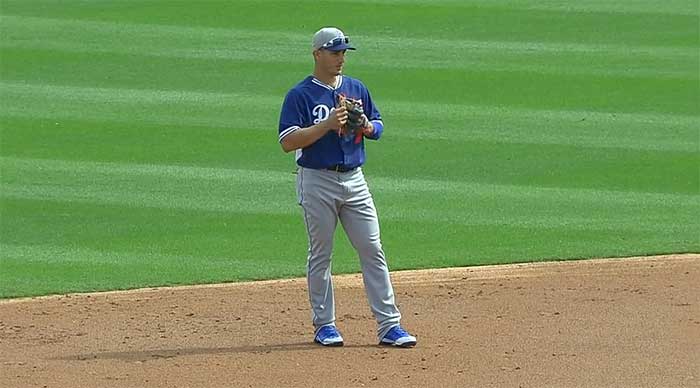 After the first four games of spring training, we’ve only seen Alex Guerrero on defense for ten innings. That’s way too small of a sample to make any judgement of his defensive ability as he transitions to a new position, but it at least gives us a few plays to look back on, especially for those of you without SNLA or MLB.tv.

GIF Link. This was a tricky play by Guerrero, flipping the ball to second base as the runner crossed his path.

GIF Link. Another good play on a slow chopper.

There’s nothing amazing about any of the above plays, but they’re all plays that a major league second baseman needs to make.

Only the first of these plays showed up in the box score, but all were in Guerrero’s vicinity.

GIF Link. Good effort, but a slow read and slow recovery from the dive.

GIF Link. Guerrero had a late jump, but would have been a difficult throw if he caught up to it.

GIF Link. This would have taken an extremely athletic play.

None of these plays are ones that he “should” have made, but an above average second baseman might have made the first one, at least. The late jumps are a bit concerning, but are to be expected for somebody switching positions.

Overall, Guerrero has done what he has needed to, but he hasn’t been impressive either. It’s a bit strange that the Dodgers aren’t giving him more time on defense, since it certainly looks like he needs the extra practice. His spring training playing time will likely ramp up as March continues, and as it does we’ll get a better picture of his adjustment to the new position.

Guerrero will start today’s spring training game against the Padres at second base, so we’ll get to see a bit more of him in the field. Hopefully, he can start looking better on offense as well.

Josh Beckett gets his first in-game action today. We’ve nothing but positive reports on him this spring, but how he feels after his first real game is important. It’ll be interesting to see if we get any information on his velocity today, though spring training velocity readings should be taken with a grain of salt.

The man competing with Beckett for the final rotation spot, Paul Maholm, gets his first spring training time today as well. He’s been dealing with a “tender elbow”, so it’ll be interesting to see how he responds.

There’s a new outfield alignment for today’s game: Puig in center, Ethier in right, and Pederson in left. If Puig is going to get extra practice in center, spring training is the right time to do it. Dee Gordon is also listed as a CF reserve for today’s game, so that should interesting to watch.

In other (extremely brief) news, Justin Sellers‘ time in DFA limbo is now over. The Dodgers have sold Sellers’ contract to the Indians.

Daniel Brim grew up in the Los Angeles area but doesn't live there anymore. He still watches the Dodgers and writes about them sometimes.
@danielbrim
Previous Dodgers, Chad Billingsley, shouldn’t rush his return
Next Beckett & Maholm return in style, Guerrero needs sliding practice