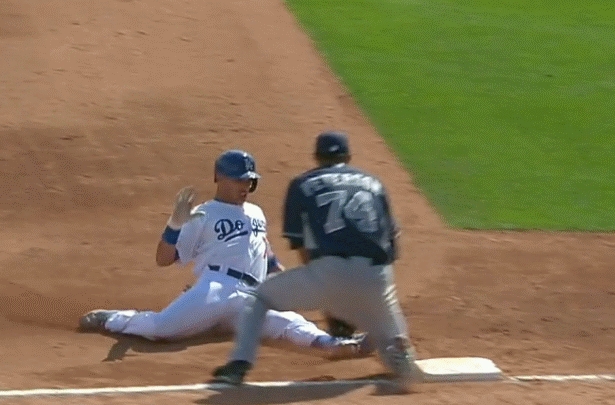 The Dodgers tied today’s Spring Training bout against the Padres, 3-3, but it’s the Cactus League, so who cares?

The main takeaway from today is that Josh Beckett certainly looked healthy in his quest to comeback from thoracic outlet syndrome. Beckett faced seven batters over his two-inning stint, and finished with three strikeouts and only one hit allowed. More than stats though, his mechanics looked smooth and repeatable, and he showed command of both his fastball and breaking balls. The Dodgers don’t need him to be his old self, but if he can stay healthy and return to form, Beckett could make for a great #5 starter.

Speaking of returns, Paul Maholm made his debut today after battling elbow problems early in camp. He threw two innings of one-hit ball, but if today was any indication, Beckett is in the lead for the final spot in the rotation.

Joc Pederson continues to look solid, despite whatever his numbers might be (probably good). While he’s shown that he can be busted inside due to a longer swing and he has some balance issues at times, he looks very comfortable at the plate (even against lefties), and has flashed both his power and arm. Future is indeed bright.

The other important ST battle is for second base. Dee Gordon is apparently the front-runner, and he showed off a hopefully improved skill set, tripling home a run after a long, quality at-bat. That’s especially important since Alexander Guerrero continues to be up and down. To me, Guerrero still looks a bit awkward and tentative, both at second base and at the plate. He’s getting better at-bats recently, but I would be lying if I said his average bat speed didn’t worry me a bit.

Most importantly, is somebody going to teach Guerrero to slide … or ???

I mean, for my amusement, it’s best if they don’t. But for the sake of his groin, thighs, butt … entire lower body, it’s probably best if he learns at some point.

Finally, in injury news, Carl Crawford is still two or three days away from returning. Not worried about the supposed outfield crunch at all.