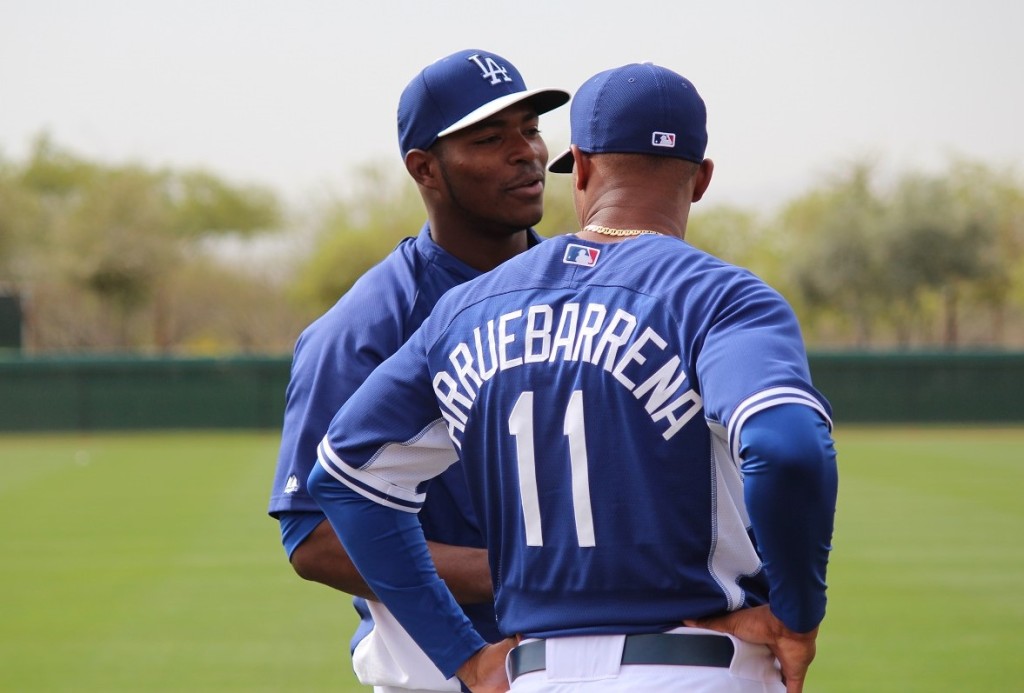 GLENDALE, Ariz. — It’s a good thing these games don’t count, because this one was one to forget. Paul Maholm gave up two long homers — one absolutely crushed by Todd Frazier — and allowed eight baserunners in 2.2 innings. Though already-cut Red Patterson looked good in allowing a single hit over 3.1, our new favorite toy Seth Rosin had his first tough outing, allowing six baserunners in three innings.

After the game, Maholm said “you learn from it, and you try to forget about it pretty quickly.”

Tim Wallach added “he got a couple balls up, and obviously that’s not his game. If he gets a ball up, that’s when he gets in trouble. I thought he did a really good job with Billy Hamilton when he was on first base, but what happens with guys like them, and that’s what’s why Dee is so important for us, is that he gets on base, and it causes you to take your focus some place else.”

As for Rosin, Dustin and I happened upon his father on the concourse. That’s right, Island Noodles isn’t just your home for something vaguely resembling vegetables at a baseball game. No inside info there, because honestly I don’t believe Rosin knows his future yet, but safe to say, the entire Rosin family badly want him to make the club (obviously), and are well aware of Rosin’s rising reputation among fans — though today’s performance didn’t help.

And so the prevailing topic of conversation around the park today was, “what is this pitching staff going to look like on Opening Day? I still think they’ll work out a deal to keep Rosin and send him to the minors — what the hell, might as well send Javy Guerra, who is likely to be lost since he’s out of options — and while Brandon League won’t be cut, I’m leaning more heavily than ever to thinking there’s a magic injury coming that keeps him off the roster, at least to start. He hasn’t pitched since Monday, isn’t scheduled to go visit the Cubs tomorrow, and has appeared only three times in March.

On the back fields, I skipped batting practice in order to watch an intra-squad game featuring Matt Kemp, Yasiel Puig, and Corey Seager, also known as “a much more interesting lineup than the one the real team had today.” Kemp went 0-6, while Puig had a stand-up triple and a homer. On the triple, I can say this: it was a laser to left-center field, and Puig didn’t even break hard out of the box. That’s not to bring up any sort of effort questions — it was an intra-squad game against minor leaguers, so come on — but to point out that it very well could have been a homer had he been going all the way.

Among those pitching against Kemp and Puig was Matt Magill, who looked free and easy while hitting 94, and Stephen Fife, who looked completely bizarre to me wearing #33.

Among the sights today: Chad Billingsley and Brian Wilson throwing bullpen sessions. If you didn’t know Billingsley had been injured, you wouldn’t have guessed it — he looked fantastic. That’s not the same as being “game ready,” of course, because the control needs work and the last think you want to do is allow him to re-injure himself by pushing too hard, too soon. Still, the way he looked in the session (and the way he bounced around during a spirited game of clubhouse table tennis) makes me think he might be back on the low end of the estimate.

As learned by an unnamed member of the media: Chone Figgins‘ first name does not rhyme with phone, but “Shawn.” Relevant information if you are attempting to speak to him.

Mike writes about lots of baseball in lots of places, and right now that place is MLB.com.
@mike_petriello
Previous The All-Forgettable Team
Next Mattingly Offers Minor Clues to Australia Roster