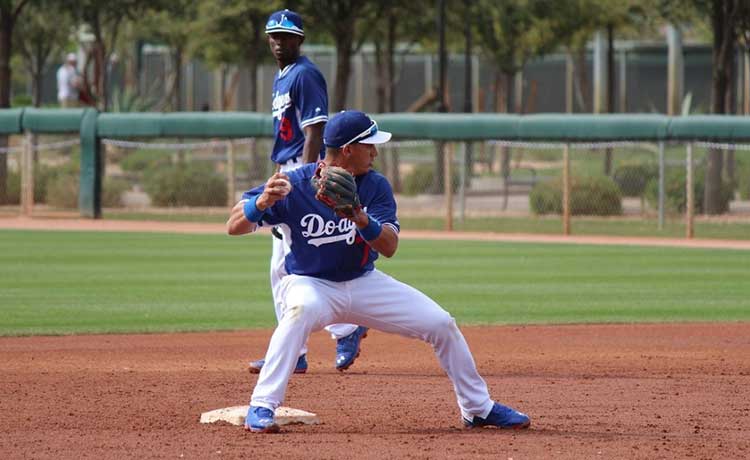 Who will be on the Dodger flight to Australia on Sunday? Don Mattingly said this morning that “we’ve pretty much made that decision,” but isn’t prepared to divulge it yet, and likely won’t until the end of the weekend. Paul Maholm will, along with fellow starters Clayton Kershaw and Hyun-jin Ryu, but whether Dan Haren will remains to be seen.

We can say with good confidence that Josh Beckett, who injured his thumb earlier this week, is not going to go to Australia. But you will see him today, because he’s expected to throw 4 innings and/65 pitches against the Cubs. He may be restricted to fastballs and changeups, since the breaking pitch is still causing him some trouble. As for the other not-going certainty, Zack Greinke, he was throwing a bullpen session this morning and looked as though he did not have restrictions.

Yet another uncertainty about Australia is Carl Crawford, who expecting a baby as soon as this weekend. If Crawford doesn’t go, Mattingly indicated they could take another outfielder, which is probably good news for Mike Baxter — but no, don’t expect to see Joc Pederson.

On Justin Turner, who seems all but assured of a roster spot, Mattingly said that he “seems comfortable all around the diamond, his hands seem to work easy, he’s had quality at-bats.” Fellow infielder Erisbel Arruebarrena, who arrived in camp yesterday, has no timetable to appear in a game yet — as Mattingly said, “I’ve met him, but I haven’t even seen him swing a bat yet.”

League was asked whether he thinks he’s competing for a job with the team, and replied, “isn’t everyone competing in ST for a job, or a role? It’s a good problem to have for the Dodgers,” continuing to say that “I haven’t thought about it since I had options.”

My guess? If he’s on the flight to Australia — a big if — he’s not going to be on the active roster.