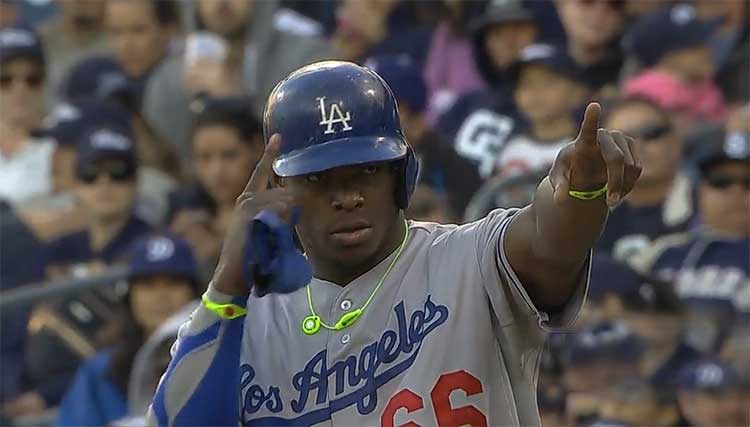 Other things happened in tonight’s 3-2 win over San Diego, and we’ll get to them, but also this happened, and thanks to Chad for GIFing it out:

After Carl Crawford led off the game with a single and then stole second, Puig stepped up against Ian Kennedy and destroyed a ball that was officially listed as having gone 410 feet, but which I assume really left his bat at 410 miles per hour. Puig added a single to left in the seventh and otherwise managed to get through the evening without lighting any babies on fire, so we’ll call that a successful night.

Also successful, for the most part, the Dodger pitching. Zack Greinke probably isn’t quite at full speed after his abbreviated spring, and he was good enough — if not particularly fantastic — in getting through five innings. No one’s complaining about only allowing two runs, of course, and he did strike out five along with allowing a Seth Smith homer. But the fifth inning was a struggle, for after a leadoff walk to Jedd Gyorko, a Will Venable single, and a Chris Denorfia fielder’s choice, his wild pitch brought in Gyorko with the second run.

But Greinke got through it, and Paco Rodriguez, Chris Withrow, and J.P. Howell got through their innings cleanly — though not without a little heartburn from Howell.

Kenley Jansen, finally entering in the ninth, made it interesting, because that’s what closers do, allowing singles to Yonder Alonso and Will Venable, and allowing Alonso to bring the tying run within 90 feet, then — after striking out Denorfia — walking Yasmani Grandal to load the bases with two outs. Fortunately, he struck out Nick Hundley to end it. Fortunately, because I like the Dodgers and want them to win baseball games. But also fortunately, because I didn’t want to rewrite this post and deal with fools who say that Jansen doesn’t have the “guts” to close, or whatever the narrative might be.

Now, here’s the downside: the middle of the order was punchless again. Hanley Ramirez, Adrian Gonzalez, and Andre Ethier combined to go 0-11 with a walk. In four games, Ramirez is 1-15 with two walks. Gonzalez is 1-13 with three walks. Ethier is 2-15 with two walks. It took a Juan Uribe double (and advancing to third on a bizarre error) followed by an A.J. Ellis walk and a Dee Gordon single in the 4th inning to drive the third run home. Through four games the Dodgers have scored just 14 runs.

They’re still 3-1, of course, and that’s all that matters. I think we just wouldn’t mind some baseball bashing from some other members of the lineup. Then again, it’s April 1. Let’s forget I even said anything.

Mike writes about lots of baseball in lots of places, and right now that place is MLB.com.
@mike_petriello
Previous Dodgers @ Padres April 1, 2014: You Probably Can’t See This Game
Next Clayton Kershaw and Brian Wilson hurting, but don’t fret too much