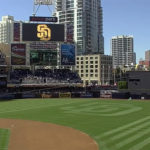 So! A lot is happening today. First, if you’d like to listen to me talk about the Dodgers for about half an hour with the esteemed Will Leitch, do check out his Sports on Earth podcast here. And if you’d like to see a review of the five instant replays that happened on the first day managers were allowed to, you can see a study I did with GIFs over at FanGraphs here. And, now that the Dodgers minor league affiliates have announced their rosters, you can check out our updated depth charts here.

And, sadly, we still don’t know when Clayton Kershaw is coming back, but Bill Shaikin says that it is being measured “in weeks, not days.” Alanna Rizzo adds that Kershaw will be re-evaluated in two to three weeks, and only then will a timetable be determined. That’s not great, but that’s also an issue that deserves its own post. For now, there’s Dodger baseball, with Zack Greinke on the mound.

But you’ll have to take my word for that, most likely. After a domestic Opening Day that was on ESPN, this game is the first of many that is exclusively going to be on SNLA, and as you most likely know all too well, most of you do not get SNLA. That means you’re either not seeing this game, or you’re resorting to illicit methords to get it, unless you happen to be close enough to San Diego to pull in the Padres broadcast on FSSD.

This is, it should be mentioned, still not a surprise. Anyone who really thought this was going to be 100 percent settled by now was fooling themselves. Just because it’s playing out like we thought it would doesn’t make it any less disappointing if you’re not able to watch this game, of course, though it’s probably worth passing along Ramona Shelburne’s point that this really isn’t in the hands of the team any longer; it’s Time Warner negotiating with cable companies. It will get done, eventually. We just don’t know when.

In the meantime, I won’t judge you if you find some underground ways to follow along, and I wouldn’t all mind if you jumped into the comment section here to hang out with us. Greinke is backed by the exact same lineup that Hyun-jin Ryu had on Sunday, which isn’t that big of a surprise. Yes, that is Ian Kennedy opposing him, and no, don’t expect anything to happen. For one, Carlos Quentin is injured yet again. For another, this isn’t the first time the Dodgers have seen him since the brawl he helped instigate last year while with Arizona.

Anyway, it was weird to see so many teams playing yesterday and not have the Dodgers be among them, even though they’d played three times already. It’s starting to feel like the season is getting into a normal groove, even though there’s another day off on Thursday.