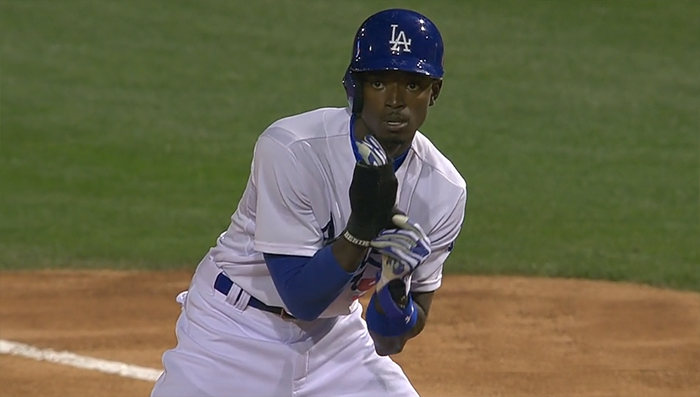 Dee Gordon has actually looked like a Major League Baseball player in the first 10 games of the season. Of course, this is the very definition of small sample size, but the early returns are promising on the Dodgers’ starting second baseman.

He’s already been worth half a win in his first nine games played, which puts him on pace to be an 8-win player. I don’t think that’s sustainable (for him), but Gordon has been a positive or better player in all aspects of the game so far.

It looked like Gordon might be a hero on Wednesday night, as he drove in the game-tying run off Joe Nathan in the ninth inning, only to have Kenley Jansen give up a home run to Victor Martinez in the 10th inning (more on that in another post, but here’s a preview: don’t fret).

Gordon is hitting .394/.432/.535 with a .425 wOBA — good for 20th-best in the National League ahead of guys like Giancarlo Stanton, Ryan Zimmerman and Ryan Braun. The fact he’s done that at any point in his career is impressive in and of itself.

There’s no way he sustains this production through the rest of the month, let alone the entire season. He will come back to earth, and it’s just a matter of when. When he does, he’ll have to adjust and continue to produce if he wants to be the Dodgers’ second baseman,

With Alex Guerrero recovering from an oblique strain, Gordon’s time to show Don Mattingly and Co., what he can do. 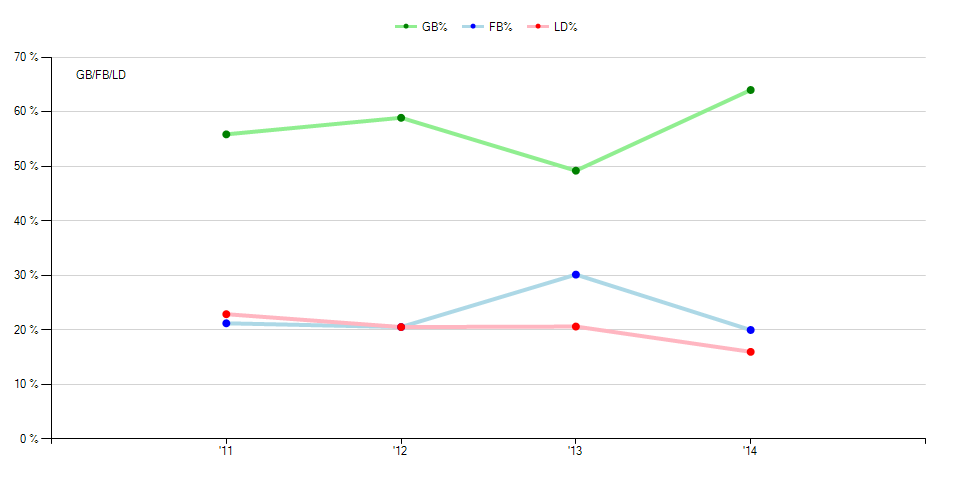 In fact, as the graph shows, his ground ball rate has increased while his fly ball and line drive rates have decreased. For a player of Gordon’s skill set, that’s not a bad thing.

But the biggest improvement for Gordon so far has been his plate discipline. Coming into the season, he had never posted an O-Swing% (swing on pitches outside the zone) less than 33.8 percent, which he did last season. This season, he’s at 26.9 percent. This means he’s swinging at fewer pitches in which he has less chance of hitting well. He’s also improved — or decreased — his swinging strike percentage. He’s only swinging and missing at 1.4 percent of the pitches he sees. That sets him up for more success at the plate.

Look, it’s a small sample size. I mean, his .414 BABIP isn’t going to hold up. He is getting lucky, but when he puts pitches in play, his speed puts pressure on the defense. And the fact he’s physically stronger than he was in seasons past plays a role. He’s able to generate more bat speed, allowing him to turn on fastballs on the inner half — at least, that’s what he did against Nathan on Wednesday night. He also took Max Scherzer out to right-center field that was “plenty” deep (it wasn’t a cheapy).

Gordon has been OK on defense, but he’s still getting used to playing second base. But his strong arm is quite the advantage there, as is his agility. He’s able to make the turn better than a guy like Guerrero (as witnessed by yours truly at spring training). He’s also stolen four out of five bases. When everyone is healthy, Gordon should be batting eighth, which could minimize his stolen base ability. But, that’s what happens when there’s a lot of really good hitters in the lineup.

For now, Mattingly will probably keep batting Gordon leadoff — or, at least until Yasiel Puig returns.

Like Chad said in last night’s recap, “I want to believe.” But, I have also been fooled before. If Gordon is still producing well in a few months, perhaps there’s some legitimacy behind his turnaround and not just SSS numbers.

We could pen a post in a month saying we can’t wait for Guerrero to come up and replace Gordon. But for now, let’s just enjoy the positive Major League production Gordon is providing early on. Things are going to change, but maybe Gordon isn’t such a lost cause after all.

Dustin Nosler began writing about the Dodgers in July 2009 at his blog, Feelin' Kinda Blue. He co-hosted a weekly podcast with Jared Massey called Dugout Blues. He was a contributor/editor at The Hardball Times and True Blue LA. He graduated from California State University, Sacramento, with his bachelor’s degree in journalism and a minor in digital media. While at CSUS, he worked for the student-run newspaper The State Hornet for three years, culminating with a 1-year term as editor-in-chief. He resides in Stockton, Calif.
@DustinNosler
Previous Dodgers fall to Tigers 7-6 in extra-inning game that was boring until it wasn’t
Next Here’s What We’ve Learned About the 2014 Dodgers So Far