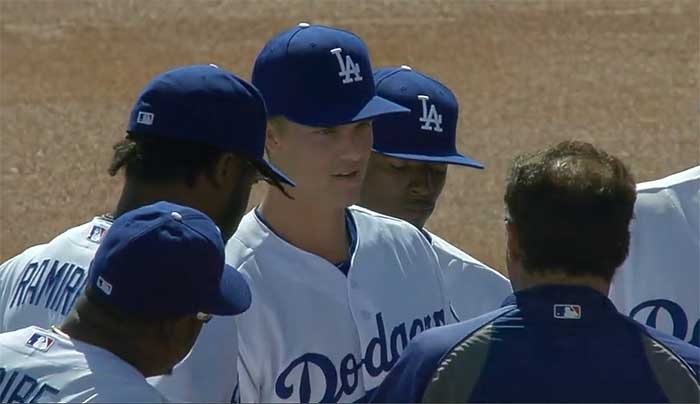 Nothing, really. Not a damn thing. With the exception of some unexpected injuries, we’ve learned very little. The Dodgers have played 10 games, which is 6.1 percent of a 162-game season. But two of those games, even though the Dodgers won them both, barely seem like they counted. They happened half a world away, a week before spring training ended. They feel like glorified exhibitions. I barely even remember what happened, if for no other reason that I barely watched them in the middle of the night. If we set those aside, the Dodgers have played eight games out of a 160-game season. That’s five percent.

It’s the first 21 seconds of “Hey Jude.” It’s the first six-and-a-quarter minutes of Star Wars. It’s America’s history up through the presidency of John Adams. John Adams died in 1826. It’s Vin Scully’s career before Jackie Robinson even retired. (I’m making that up, obviously, because there’s no way to know for sure how many games he’s done. He’s completed 64 seasons of Dodger baseball since his 1950 debut, but for the first decade of his career the season was only 154 games long, and for decades he’d miss games here and there due to other obligations, and in recent years he’s lost many games to national broadcasts and a reduced travel schedule, so I’m spitballing 64 years times an average of 130 games, five percent of which is 416 games.)

Five percent is a nickel, in terms of a dollar. A dollar is barely anything. A nickel is nothing. Five percent of a season is also nothing, and that fact that this five percent comes in the first week of April, as opposed to the third week of July or the second week of September, doesn’t really change that. Nothing that has happened so far should significantly change your perception of what these players are. Salvador Perez isn’t going to hit .458/.594/.625 all season for Kansas City. Chase Headley is probably not going to hit .125/.152/.125 all year for San Diego.

That means that there’s little reason, good or bad, to think about these Dodgers differently than you did 10 days ago. Luis Cruz once hit .414/.452/.690 over an eight-game stretch. Brandon League once faced 34 batters over eight games and allowed three hits and zero runs. At roughly the same time, Hanley Ramirez was hitting .167/.194/.267 over an eight-game stretch. You may not have noticed any of that happening at the time, but if you did, it didn’t — or shouldn’t, at least — have changed what those players were. It’s eight games. It’s five percent.

Now that doesn’t mean we have to totally ignore what we’re seeing, of course. The games still count. I’m thrilled that Dan Haren has looked so good, and though I don’t imagine he’ll be keeping up that 0.75 ERA, I’m encouraged. I’m very impressed by how dominant Chris Withrow has been; I don’t suddenly think he’s the best reliever in baseball. I like that Matt Kemp seems to be healthy; I like what we’ve seen from Dee Gordon, though it’s going to take a lot more than a week to make me a believer. I can’t ignore that Kenley Jansen has had a tough week; it doesn’t change that he very well might be the best reliever in baseball, or at least very close to it.

Two weeks ago, the Dodgers were the overwhelming favorites in the NL West. They’re on a 97-win pace. That the Giants have gotten off to a good start, and that Clayton Kershaw and A.J. Ellis and Brian Wilson have landed on the disabled list, have changed those odds slightly. Injuries are one thing you really can take away from a small sample, and each start given to Paul Maholm or whomever instead of Kershaw hurts. But I don’t think anyone would argue that the Dodgers aren’t still the favorites.

We have some directional knowledge, now. We have things to look out for, and starts both good and bad to keep an eye on. But what we don’t have is enough information to make real serious value judgements, and yes, I am talking to the guy on Twitter asking me when the Dodgers will dump Jansen to go with Withrow. If you didn’t think that a week ago, you shouldn’t now. If you did think that a week ago, seek help, immediately.

It’s five percent. We should keep that in mind, because small samples can play havoc on rationality. Well, except for the fact that that not-mascot is creepy as hell. You don’t need a larger sample size on that.

Mike writes about lots of baseball in lots of places, and right now that place is MLB.com.
@mike_petriello
Previous Dodgers benefting from Dee Gordon’s improved offense
Next No reason for Dodgers, fans to be worried about Kenley Jansen