Joc Pederson Off To Just A Fantastic Start in Triple-A 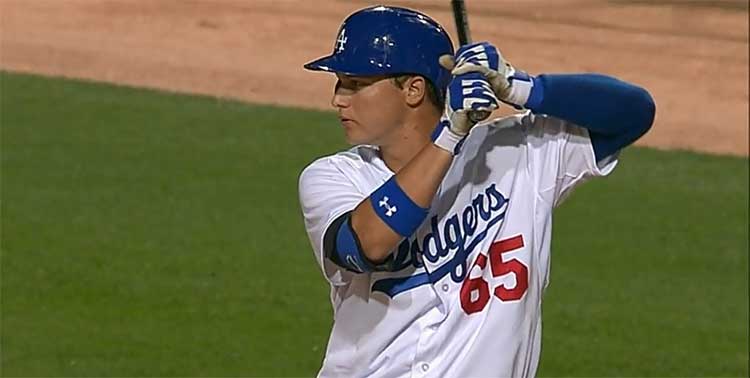 Lost, maybe, in Matt Kemp‘s big game and the daily question of “how does Yasiel Puig‘s thumb feel / did he light a puppy on fire” is the fact that the “too many outfielders” problem that the Dodgers face isn’t because they have four outfielders. It’s because they have five, and I’m not talking about Scott Van Slyke.

It’s because of Joc Pederson, and how is he liking his first crack at Triple-A? Well, he went 0-3 in his first game. But then he homered in his second… and his fourth… and his fifth. In the six games after that debut, he has 10 hits — two doubles to go along with the three dingers — and, somewhat unbelievably, seven walks. (Against five strikeouts. He also stole two bases.) Before you can shout “BUT ALBUQUERQUE!”, well, the Isotopes started the season in Tacoma and Reno. They make their home debut tonight, with Zach Lee on the mound against the Rainiers.

Now, you can say “small sample size!” and you wouldn’t be wrong, because he’s… well, forget the number of plate appearances. His team hasn’t even played at home yet. That’s how early it is. But it’s still nice to see him at the very top of Baseball America‘s first Hot Sheet of the season:

If you’re looking for a safe bet for an upper-level prospect to post monster numbers this year, look no further than Pederson. He’s an elite prospect with a patient approach, plus raw power and is playing his home games in Albuquerque, a park that helps keep the stat sheet padded for veteran 4-A mashers every year.

But really, I’m writing this post almost entirely so I can show you this ridiculous homer he hit against Reno’s Alex Sanabia three days ago. Just watch the center fielder:

That’s Ender Inciarte, who is a real person who exists I guess, and he knows. He knows right away. You can’t even see where the ball landed. You can see a train moving, and according to Google Maps it’s an Amtrak headed east. If Pederson’s ball landed there, might be about 1,000 miles away by now. It’s the longest homer in baseball history. DO NOT TRY TO REFUTE THIS.

Since we’re here, Pederson hit one the day before off Derek Eitel. It’s not quite as much of a no-doubter, but it does make Roger Kieschnick sad.

Again, it’s only been a few games, and like I said yesterday, it’s far too early to be making substantial differences in player valuations. Pederson was a very good prospect before the season, and he’s a very good one now. The objective baseball analyst in me knows that it makes sense for him to be where he is, because it’s his first time above Double-A, because he still needs to improve his hitting against lefties — seven of the 10 hits, and all five of the extra-base hits, came against righties — and because the longer it is until his service time clock starts, the more years of control the Dodgers have over him. There’s not room for him in the bigs right now, so might as well have him somewhere where he’s playing every day.

But all that being said: the fan in me is getting excited to see what he can do at the big league level. The idea of Pederson alongside a healthy Kemp and Puig is jaw-dropping, with Andre Ethier or Carl Crawford either in reserve or traded or both. It’ll never happen, of course. It’s a fan’s dream. And so I’ll be just as excited — if not necessarily pleased — to see David Price in Dodger blue in July, after Pederson and Lee are sent east should Tampa Bay’s Matt Moore-less rotation prove to be fatal to their playoff hopes. Quiet, you: we all know this is what’s going to happen.

Mike writes about lots of baseball in lots of places, and right now that place is MLB.com.
@mike_petriello
Previous No reason for Dodgers, fans to be worried about Kenley Jansen
Next Dodgers @ Diamondbacks April 11, 2014: The Return of the Puig