Kenley Jansen Is Suddenly The Worst Closer In Baseball, Or Something 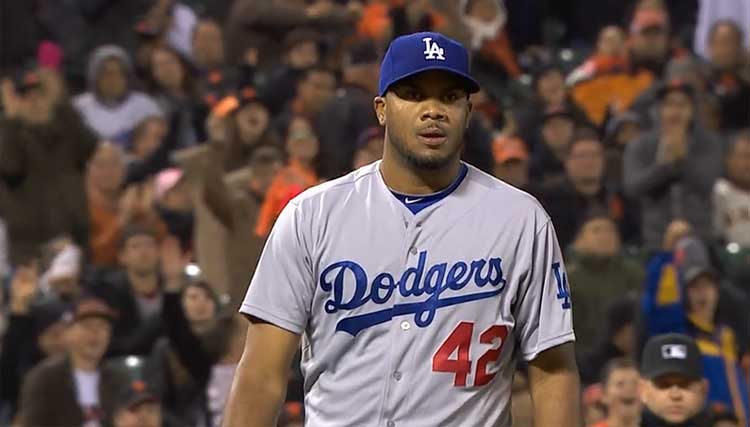 Oddly — or, I don’t know, maybe it’s not — the tenor of discussion following last night’s extra-inning loss is less about Brandon League being terrible than it is about Kenley Jansen being unable to hold onto a 2-1 lead in the ninth inning.

For clarity, here’s what Jansen did. He struck out Hector Sanchez on four pitches. Then, he got Angel Pagan to hit a grounder, which is fantastic. 80 percent of the time (-ish), that’s an out. This time, it happened to bounce off Jansen’s foot, from where he was unable to make the play. This is a nothing play. It happens a million times a season:

Then Brandon Belt grounded one down past third base, where Juan Uribe was unable to get to it since he had been playing off the line against the lefty hitter. Pagan wasn’t going with the pitch, but he did have a substantial lead, and since the ball bounced off the bullpen mound and the short wall, delaying Andre Ethier from retrieving it, he was able to score all the way from first:

Jansen then struck out Pablo Sandoval, and (after an intentional walk to Buster Posey) got Hunter Pence to fly to center. The Dodgers didn’t score over the next few innings while Jamey Wright locked it down, and then League coughed it away.

But of course, in the box score this morning, what you see is that Jansen allowed two hits, including a double, and blew the save. I’m hoping I don’t need to tell you how ludicrous “blown saves” can be — hell, Chris Withrow got slapped with one in the sixth inning for giving up an unearned run on a sacrifice fly, thanks in part to a Hanley Ramirez throwing error — but that completely ignores the truth of what happened. Jansen gave up two groundballs. With better luck or positioning, one or both are outs. With better luck, the ball in left bounces in a way that Ethier gets to it more quickly and gets Pagan at the plate. None of those things happened. This does not make Jansen a bad closer.

I’m not trying to be an apologist. I’m not totally blind to the fact that this has happened in a few games for him already, and that there’s a certain point where you have to ask some questions. But really, BABIP is one of the simplest, easiest to understand tenets of sabremetrics. Sometimes a grounder goes where you want it to, and sometimes it doesn’t. The pitcher really has little control over that. Those same balls could have been 1-3 and 5-3, and suddenly we’re not talking about any of this. Those who complain about it have a completely unrealistic expectation of what a closer should be, that he is required to be 100 percent perfect at all times and never allow a bat to make contact with a ball. That’s never happened. It never will happen. Nor will Jansen carry a .556 BABIP on him all season long.

Now, as for why League still exists on this roster…