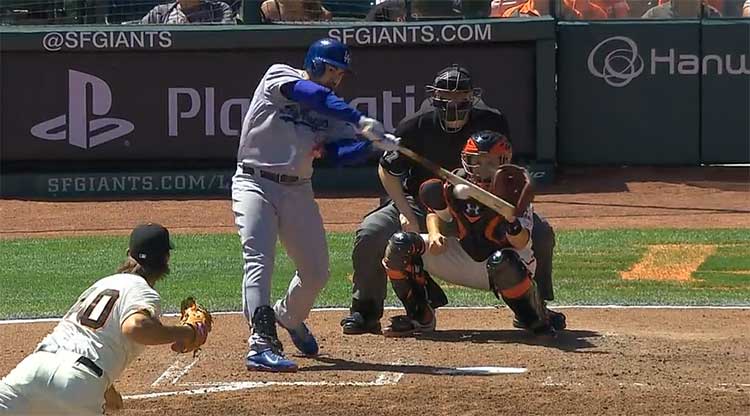 In between Yasiel Puig doing all the things that make him great — and don’t forget the out-of-nowhere catch that may have saved a run in the eighth inning — there was actually a baseball game today. I know! And once again, Hyun-jin Ryu is making people notice that the Dodgers have more than two outstanding starting pitchers. Ryu shut out the Giants on 112 pitches over seven innings, walking one and allowing four singles. That’s it.

If this sounds familiar, well, maybe it should. Ryu has now pitched three times on the road, and he’s allowed exactly zero runs in 26 innings against Arizona, San Diego, Arizona again, and San Francisco. His one game at home? Two innings, eight runs. WHAT DOES THIS MEAN? Other than, you know, nothing, probably. (Eric Stephen notes that Ryu is now the second Dodger in the last century with four straight road scoreless starts, joining Orel Hershiser.)

Also as usual: the Dodgers really, really needed Ryu to be good, because the offense was underwhelming. The Dodgers did get 11 men on base, including three doubles, yet somehow managed to get only two runs in, one on a Tim Federowicz single, and one on the Adrian Gonzalez single you see above to plate Scott Van Slyke. Matt Kemp, disappointingly, went 0-4, but at least he made a sparkling catch in deep center field; Dee Gordon, getting a shot against lefty Madison Bumgarner because Justin Turner was pressed into service at shortstop to replace Hanley Ramirez, also went hitless. In the three games in San Francisco, the Dodgers scored five runs. It’s hard to win like that, and for the most part, they didn’t.

After Ryu, Brian Wilson came on in the eighth for the first time since returning from the disabled list and proceeded to scare the hell out of all of us, needing 28 pitches to get through the inning, allow a double to Ehire Adrianza and a walk to Hunter Pence. He did, however, touch 97, which is a good sign for a guy who just missed two weeks with elbow trouble, but only 15 of those 28 pitches were strikes.

And I suppose we can’t ignore Kenley Jansen, who also made it interesting by letting a run in, despite allowing just about nothing hard-hit. Jansen started off by striking out Mike Morse, which is great, except Morse still reached when Federowicz couldn’t handle the pitch. Jansen then blew away Hector Sanchez, but walked Gregor Blanco before allowing Adrianza to dink a dink into left field, scoring Morse. Mercifully, pinch-hitter Brandon Crawford flew out to end it. The Dodgers and Giants are now tied for first, with the Dodgers headed back home to welcome the putrid Diamondbacks tomorrow night. It’s fun just to type that.

Oh, and just in case you still think that Puig is the only player in the game who does dumb things: Gonzalez led off the eighth with a double, and after Kemp struck out, Van Slyke grounded to Jeremy Affeldt… who caught Gonzalez inexplicably hung up between second and third. As Gonzalez was being tagged out in the rundown, Van Slyke tried to sneak into second, getting tagged out as well for your traditional 1-6-5-4 double play. Puig absolutely does dumb things, don’t forget. No one’s saying he doesn’t. But so do other players. Lots of them.

Mike writes about lots of baseball in lots of places, and right now that place is MLB.com.
@mike_petriello
Previous Yasiel Puig Just Had The Most Yasiel Puig Inning Ever
Next Dodgers’ prospect scouting report April 2014: Chris Anderson