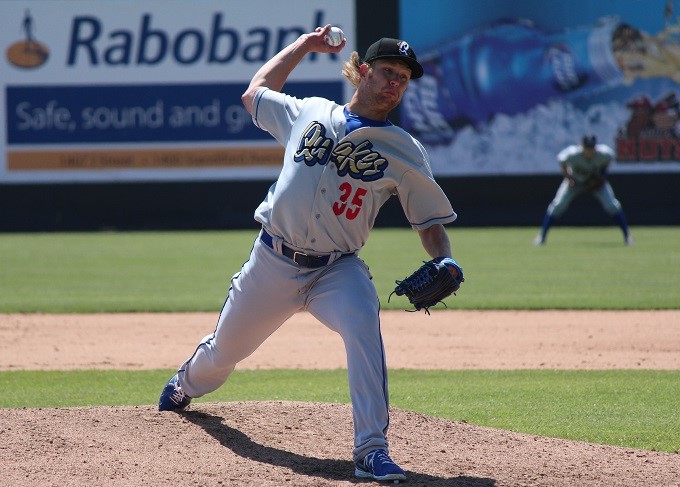 While Julio Urias is one of the most prized pitching prospects in the California League, the Dodgers also have the likes of 2013 draftees Tom Windle and Chris Anderson.

I was able to see Anderson’s April 13 outing in Modesto against the Rockies’ High-A affiliate, the Nuts.

The wind was blow out to right field for most of the afternoon, and he might have been aided by the wind. Anderson gave up quite a few hard-hit balls and fly balls, despite having a heavy fastball prime for getting grounders. That surprised me a bit.

Anderson, 21, was the Dodgers’ first-round selection (18th overall) in the 2013 MLB Draft out of Jacksonville University. The native Minnesotan signed for the slot-recommended amount of $2,109,900.

Early in the draft season, Anderson was a projected Top-10 pick despite pitching for a relatively small college in Florida. However, overuse caused his performance to suffer, which also caused his draft slot to suffer.

He debuted at Low-A Great Lakes last season, and performed relatively well. He was elevated to High-A Rancho Cucamonga for the 2014 season.

If you like heat, this was the outing to see. Anderson threw primarily in his 90-pitch outing. He sat at 93-96 MPH, and topped out at 99 MPH. He struck out Rockies’ prospect Trevor Story on a 98 MPH fastball in the first inning that was awfully impressive. He threw only fastballs in the inning.

He didn’t throw the 2-seamer a lot in this outing, as his fastball was up in the zone a lot with just a little arm-side run. But he didn’t get a ton of movement as the Nuts squared up more fastballs than expected for loud contact.

Anderson’s bugaboo is his control and command. It came and went (mostly went) in this outing, as he walked five hitters in his 3 1/3 innings, including three in the fourth inning. Me missed his location a lot — up and away to lefties and outside to righties.

The first breaking pitch he threw was his curveball. It sat at 80-81 MPH and topped out at 83 MPH. He threw a couple of good ones — including one in a 1-1 count that stole him a strike. He threw it sparingly (seven times) and it flashed average potential. It featured a sharp 11-5 break, but it wasn’t to be confused with his slider.

His slider was an 85-87 MPH offering that topped out at 88 MPH. It had some cutter-like action, but the shape of it wasn’t always consistent. He threw one really sharp one, a few flat ones and a few that looked like cutters. On his first slider, his arm slowed noticeably — something he’ll have to improve as he moves up the ranks. It flashed solid-average potential, but it’s also been said it’s his best off-speed pitch. On this day, his curveball was the better of the two breakers.

He didn’t throw his changeup in this outing, which is somewhat surprising to me as it was supposed to be his clear No. 3 pitch. But his fastball was the star of the day — when he threw it well.

Like many early-round Dodger draftees of recent years, Anderson’s delivery is clean. When he begins his delivery, his body goes a little off-balance (just slightly) — kind of a rocking motion — before he explodes forward toward the plate. That could be a hindrance when it comes to repeating his delivery and arm slot.

He throws from a high three-quarters arm slot that is almost over-the-top (but not Zachary Bird over-the-top). He’s able to get some good downward plane on his pitches that should lead to a good sinking fastball down the road.

He’s a big guy with a strong base, so having a clean delivery will benefit him greatly throughout his career.

Here’s some video I shot of Anderson’s outing.

Here’s how I would grade Anderson, in the table at right. His mullet graded out at plus-plus, as he flashed a 70 on this day.

Anderson impressed with his fastball and his better-than-expected velocity. The radar gun may have been a bit hot, but the Nuts’ starter was working in the mid-80s with his fastball, so it couldn’t have been that hot. His off-speed pitches need some work, and I’d like to see him incorporate his changeup more and either choose his slider or curveball to be his No. 2 pitch. He can be a 4-pitch pitcher, but command/control issues could lead to him scrapping a pitch.

He has the upside of a No. 2 starter, but he’s more likely a No. 3 or No. 4 starter. He reminds me a lot of Chris Withrow, and he could very well follow Withrow’s path if his command doesn’t improve. If he continues to miss his locations on a consistent basis, he could end up in the bullpen. If he does, he profiles as a late-inning, power reliever with the ability to close. Makeup and poise will determine whether he could be a future No. 2 starter or closer. But Anderson definitely has a future in the majors in some capacity.

Dustin Nosler began writing about the Dodgers in July 2009 at his blog, Feelin' Kinda Blue. He co-hosted a weekly podcast with Jared Massey called Dugout Blues. He was a contributor/editor at The Hardball Times and True Blue LA. He graduated from California State University, Sacramento, with his bachelor’s degree in journalism and a minor in digital media. While at CSUS, he worked for the student-run newspaper The State Hornet for three years, culminating with a 1-year term as editor-in-chief. He resides in Stockton, Calif.
@DustinNosler
Previous Dodgers 2, Giants 1: Exhale
Next Diamondbacks @ Dodgers April 18, 2014: Hanley Lives