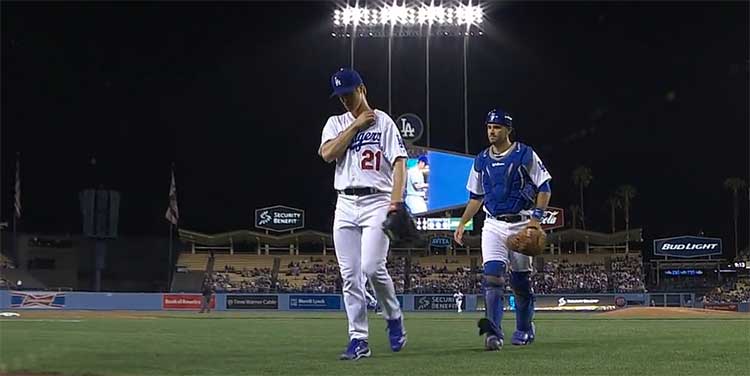 I’m almost completely and totally uncertain of what to say about Zack Greinke any longer. It almost feels like we take him for granted, which is completely unfair of us, because his brilliance is nearly unmatched. And yet here we are, after he just struck out 11 Phillies over seven innings, then doubled, walked, and scored a run at the plate, and the reaction is almost: well, yeah. Of course he did. It’s the 17th time in a row he’s thrown at least five innings and allowed two or fewer runs. He’s now got 40 whiffs and five walks on the season. It almost feels like he’s toying with the opposition.

I guess the highest credit I can give him is this: have you noticed the distinct lack of panic around the fact that Clayton Kershaw, the near-unquestioned best pitcher in baseball, has made zero starts in the Northern Hemisphere this season? Yeah, me too. That’s because of Greinke, and to a slightly lesser extent, Hyun-jin Ryu. Greinke was great tonight. Of course he was. He always is.

Oddly enough, the 5-2 score has little resemblance to the game Greinke pitched in. This was a 2-1 game into the seventh, when Yasiel Puig‘s triple — and more on that in a second — drove in Greinke to make it 3-1. In the eighth, things started to get a little wacky. Greinke came out to make one pitch, seeing his night end when Jayson Nix hit a leadoff homer. J.P. Howell sailed through the rest of the inning, then Hanley Ramirez crushed, and I do mean crushed, a homer off Mario Hollands in the bottom of the frame. That was one of two extra-base hits for Ramirez, and after how awful his last week has been, let’s hope that’s a sign of things to come. Matt Kemp had two doubles himself, and Scott Van Slyke, Puig, and Drew Butera (!) also had two hits apiece.

Kenley Jansen came in for the ninth, his fourth appearance in five days. The Dodgers have 13 pitchers. 13! If it had been a 6-2 lead, he would’t have come in. But it was 5-2, so it was a “save situation.” It was his 16th appearance, and no one else in baseball has more than 12. If you think that’s not going to come back and bite you at some point….

Back to Puig, this is the triple. SO BAT FLIP, VERY… not a homer (via Chad):

This is awesome. Everything about it is awesome. The flip, the slide, the hammer swing… love it. Now this, on the other hand…

…maybe not so much. Never, ever boring, though.

Mike writes about lots of baseball in lots of places, and right now that place is MLB.com.
@mike_petriello
Previous Phillies @ Dodgers, April 23, 2014: Enter Hamels
Next Is Kenley Jansen Being Used Too Much?