The Dodgers’ four outfielder problem is now a problem 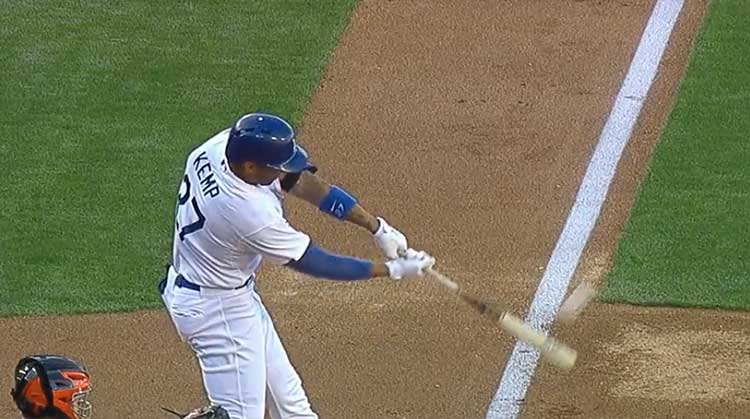 Remember folks saying the four outfielder thing wasn’t going to be a problem until it was a problem? Well, it’s a problem now.

Matt Kemp didn’t start on Thursday night against Kyle Kendrick, for some strange reason. He was coming off a 2-for-4, 2-double night on Wednesday, but Don Mattingly decided to start Carl Crawford and Andre Ethier instead of Kemp.

Look, I don’t envy Mattingly’s position. It isn’t his fault the Dodgers have four full-time outfielders for three spots (that’s on Ned Colletti and Co.), but this is what needs to happen for the foreseeable future:

It’s about putting the best lineup on the field every night. Yes, there are going to be platoon situations when the lefties sit, giving the Dodgers an outfield (from left to right) of Scott Van Slyke, Kemp and Puig. That’s a given. But, unless Kemp needs a night off, has piss-poor success against a starter or is hurt, he needs to be playing every day. He’s clearly healthy and has been a victim bad luck (and a high strikeout rate) early on. And Puig needs to play every day, period. He’s 23. He doesn’t need a ton of off days.

That leaves Crawford, Ethier and Van Slyke to fight it out for the third spot. Like I said earlier, Van Slyke should start in left field when there’s a lefty on the mound, unless he’s spelling Adrian Gonzalez at first base (as he did on Wednesday).

This is where it gets a little tricky, as neither Crawford or Ethier are going to be pleased with sitting. I say to that, play better and you won’t sit. Right now, neither of them are hitting well:

The edge goes to Ethier for defense, as he’s a half-way decent defender in center field and a borderline plus guy in left field. Crawford is an adventure when he has to go back on balls in left field. He’s good at coming in and moving laterally, thanks to his speed, but I have less confidence in him going back on balls than I do Kemp.

It’s easy to say, “Just trade Crawford and/or Ethier to solve the problem.” It isn’t easy to do. Both Crawford (3 years, $62.5 million) and Ethier (3 years, $56 million) are signed to ridiculously overpriced deals (not counting their 2014 contracts), and something will have to give eventually. Maybe by July 31, maybe next winter — but something will have to change. For now, Kemp and Puig need to be in there most days and Mattingly will not only have to manage playing time for Crawford and Ethier, but also their egos. It’s part of his job, even if it isn’t his fault the situation exists.

None of this might even matter if Joc Pederson keeps hitting the way he has in Triple-A. He might force himself into the Dodgers’ lineup, thus creating an even bigger problem. Honestly, a Pederson-Van Slyke platoon is much more appealing than running Crawford and/or Ethier out there most every day.

Luckily for the Dodgers, they travel to Minnesota next week, so they’ll be able to use the designated hitter to alleviate the problem for a few games, but this is going to be a problem until someone gets hurt or moved.

Kemp wasn’t happy he originally wasn’t in the starting lineup for the Dodgers’ home opener on April 4 (he started because Puig decided to be dumb), so it’s safe to say he’s not thrilled with sitting a few times a week. He wasn’t being selfish or arrogant when he said in spring training, “I’m not a fourth outfielder.” It’s the truth. Kemp is infinitely more talented than Crawford and Ethier, even if Kemp isn’t the 2011 version of himself. He has every right to expect to be in the lineup every day — as do Crawford and Ethier. But the front office has created a difficult situation for Mattingly to deal with. It’s going to be up to him — for now — to handle. Keeping Kemp happy and, more importantly, in the lineup is more important than playing inferior players on days Kemp doesn’t need rest.

This is a problem that needs to be fixed soon, because even if the Dodgers were to (somehow) trade Crawford or Ethier and lose another outfielder to injury, Pederson is ready to step in and, more than likely, be better than Crawford or Ethier.

Mattingly on daily decision to sit an OF, today Kemp: “Every day it’s a little bit of a problem, for the most part. This was not an easy 1.”

Dustin Nosler began writing about the Dodgers in July 2009 at his blog, Feelin' Kinda Blue. He co-hosted a weekly podcast with Jared Massey called Dugout Blues. He was a contributor/editor at The Hardball Times and True Blue LA. He graduated from California State University, Sacramento, with his bachelor’s degree in journalism and a minor in digital media. While at CSUS, he worked for the student-run newspaper The State Hornet for three years, culminating with a 1-year term as editor-in-chief. He resides in Stockton, Calif.
@DustinNosler
Previous Phillies 7, Dodgers 3: Wilson brought his gas can
Next Rockies @ Dodgers April 25, 2014: I Don’t Believe Charlie Blackmon Is Real