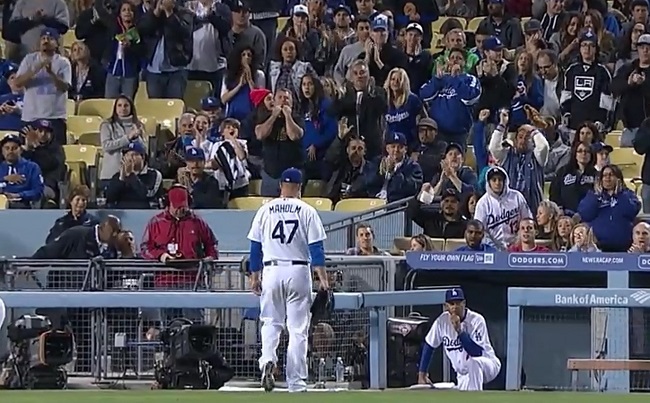 If you saw this outing by Paul Maholm coming, you’re either lying or need to play the lottery. His outing is even more impressive seeing as the Rockies were hitting an MLB-best .296 (by 34 points) and 131 runs scored (by 22 runs) coming into the game.

Maholm’s line was fantastic: 7 IP, 6 H, 2 R, 2 ER, 1 BB, 3 K, 84 pitches, 53 strikes. It was clearly his best outing as a Dodger and may have bought himself an extra start or two, as Clayton Kershaw — barring injury to himself or another starter — will take Maholm’s spot sooner rather than later.

Chris Withrow relieved Maholm and labored through the eighth inning. He walked the bases loaded with one out for Carlos Gonzalez and Troy Tulowitzki. So, naturally, he strikes out both of the elite hitters swinging, because baseball.

Adrian Gonzalez stayed hot, going 2-for-3 with a home run. It was his eighth of the season, and his third to left field. Before this season, he had exactly zero home runs to left field as a Dodgers, and just three to the left of center field. Matt Kemp, somehow, it a pitch low-and-in out to right field. He had just enough on it, as Rockies’ right fielder Brandon Barnes just missed robbing him of a homer. He also had a double and a would-be bloop single, but Gonzalez got thrown out at second.

Yasiel Puig bat-flipped an RBI ground-rule double in the eighth inning. With Dee Gordon on first base, it cost the Dodgers a run. Juan Uribe came up after and hit a fly ball to center field. Puig was thrown out at third base before Gordon scored, so it was doubly Puig’s fault for the Dodgers not winning 7-3. God, he’s terrible. But seriously, he needs to start running the bases better and sliding better. Is there no one in the organization who can teach this man to slide correctly?

Brian Wilson came in to finish the game, but he walked the first two hitters and was promptly removed for Kenley Jansen. Jansen allowed an inherited runner to score, but that was it. Apparently, Wilson can’t even be trusted with a 4-run lead. That’s no good.

The worst news of the night: Hanley Ramirez left the game after the third inning. He was seen flexing his right hand after an RBI ground out, and in the dugout. Justin Turner replaced him. It isn’t exactly clear how the injury occurred, but he ended up with a bruised thumb. X-rays were negative for anything else. He’s day-to-day. It’s the second health scare from Ramirez this season. Here’s hoping that doesn’t become a trend (better than actually being injured, though).

Dustin Nosler began writing about the Dodgers in July 2009 at his blog, Feelin' Kinda Blue. He co-hosted a weekly podcast with Jared Massey called Dugout Blues. He was a contributor/editor at The Hardball Times and True Blue LA. He graduated from California State University, Sacramento, with his bachelor’s degree in journalism and a minor in digital media. While at CSUS, he worked for the student-run newspaper The State Hornet for three years, culminating with a 1-year term as editor-in-chief. He resides in Stockton, Calif.
@DustinNosler
Previous April 26, 2014 Rockies @ Dodgers: In Appreciation Of Juan Uribe
Next Rockies @ Dodgers April 27, 2014: Ryu vs. the homer-happy Rockies