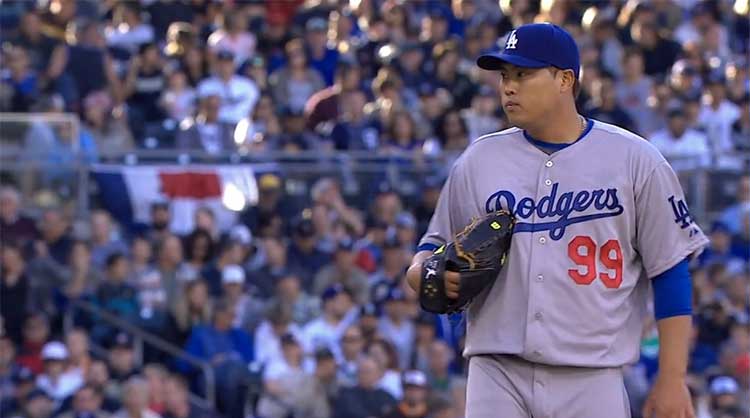 Hyun-Jin Ryu takes the hill for the Dodgers today, and thus far his 2014 campaign shows little separation from his 2013. Fortunately, that’s a positive thing, and there’s been little indication of skill collapse or that opposing hitters are on the verge of figuring him out.

Granted, he’s not likely to hold an ERA around 2 all year either, but his ability to lock down the No. 3 spot in the rotation and pitch like a No. 2 while Clayton Kershaw has been shelved has certainly helped hide the absence of one of baseball’s best.

Ryu will be put to the test today against the Rockies, who come into the game fifth in the MLB in wOBA against lefties and second in the majors in homers (Ryu has yet to surrender one).

Yesterday, I speculated that Clayton Kershaw needs at least one more rehab start, and perhaps two would be best, but Kershaw thinks he’s ready now.

“He feels good today,” Mattingly said. “He said he felt like he didn’t even pitch.”

He feels so good that he finds a second rehab start unnecessary, though the medical staff is understandably pushing for caution. Kershaw has made only one start this season: opening day in Australia on March 22. That was more than a month ago.

Mattingly said Kershaw was scheduled to throw a bullpen session on Monday, and the Dodgers would know about his next step afterward. Kershaw politely declined comment.

The Dodgers are off Monday and Mattingly plans to give each member of the rotation an additional day off. If Kershaw were to replace Paul Maholm in the rotation, he would start on Friday.

Had to figure Clayton would say something along these lines, but as I mentioned, the main issue with making his next start with the Dodgers is that he’ll probably be limited to 70-80 pitches.

But he could easily find his next start coming at double-A Chattanooga or triple-A Albuquerque. The Dodgers certainly don’t want to take any chances with their $215-million investment. After throwing only 56 pitches for Rancho Cucamonga, they could not expect him to go much more than 70 in his next start.

Mattingly said he was staying out of the difference of opinion on Kershaw’s next move.

“I don’t want to be part of the debate,” Mattingly said.

It sounds to me like he’ll get one more rehab start to build his pitch count back up, and if that goes well, then we’ll see him take Paul Maholm‘s spot on May 7 at the Nationals.

Kershaw isn’t the only Dodger star with current injury concerns, as Hanley Ramirez caused panic when he had to be removed from yesterday’s game due to a right thumb issue.

As reported during the game though, the x-rays on the thumb came back negative, and the injury is being labeled a “bruise”. Hanley will get a scheduled day off today, but what happens with his playing time afterward should reveal the actual severity of the issue.

Manager Don Mattingly said after the game Ramirez had a contusion on his thumb, caused by hitting the knob of the bat. Ramirez was already scheduled to get an off day on Sunday.

After struggling for about a week after being hit on the hand by the Giants, Hanley had come on of late, going seven for his last 15 with a 1.433 OPS over his last four games.

So since things were going well for him again, of course another “minor” issue would prop up. Hopefully this is as much of a non-issue as Hanley made it sound, because losing him would be a huge blow to the lineup.