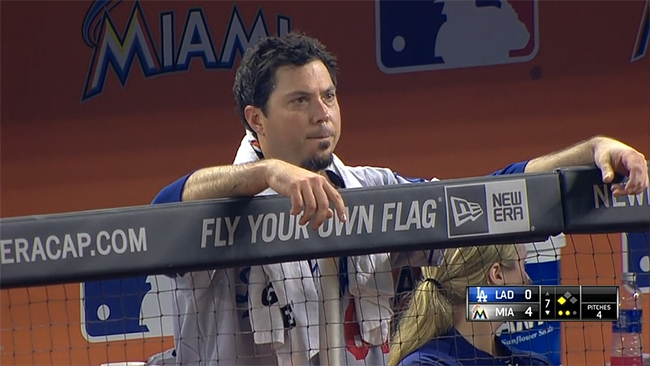 After last night’s marathon, the Dodger bats and defense didn’t look awake as they fell 6-3 to the Marlins.

Josh Beckett, who flew to Miami ahead of the team, pitched pretty well despite allowing four runs. Other than a home run to Jarrod Saltalamacchia, Beckett didn’t allow many hard-hit balls. He also struck out eight batters and walked one (four pitches to Christian Yelich leading off the first inning). Most importantly, he lasted 6-2/3 innings, giving an exhausted bullpen some much-needed rest. His breaking pitches looked pretty sharp and his velocity didn’t drop too much even though he threw 113 pitches. Seeing his endurance at this point less than a year after thoracic outlet syndrome surgery is a very good sign.

The Marlins’ second run scored in an odd fashion. With Saltalamacchia on first, Garrett Jones lined a ball to right. Puig broke a bit late and tipped the ball off his glove. He threw the ball to second, attempting to get Jones out (a throw to Adrian Gonzalez might have been a better choice). The throw was late to second, and after a long pause Hanley threw the ball home. The relay appeared to arrive on time, but Miguel Olivo dropped the ball and the run scored. Jones also scored the third run of the game as he continued to do his best Carlos Ruiz impression.

After Beckett was removed, the Dodgers defense gave up a few easy runs behind Jose Dominguez. Crawford bobbled a ball in left and turned it into a triple, Hanley booted a ball up the middle, and a ball was blooped between Gordon, Puig, and Gonzalez. After all was said and done, four runs scored in the seventh, allowing the Marlins to put the game away.

Tom Koehler, the Marlins starting pitcher, allowed just three hits in seven innings. Dee Gordon had three singles tonight (one on an excellent bunt) and a stolen base. Unfortunately, all other Dodgers combined for just four additional hits.Carl Crawford went 0-for-4, and his hitting line is down to .185/.212/.259. With the current outfield situation, it’s getting hard to imagine Crawford receiving regular playing time if he continues to hit like this for much longer.

Zach Lee pitched for the Isotopes tonight, which means that the only option remaining for Sunday’s start is Stephen Fife. The idea of watching Fife face Giancarlo Stanton is terrifying, but at least we’ll get to watch Jose Fernandez at the same time. The Isotopes added Nick Struck (which apparently is not a fake name) to replace Fife on their roster.

Daniel Brim grew up in the Los Angeles area but doesn't live there anymore. He still watches the Dodgers and writes about them sometimes.
@danielbrim
Previous Dodgers @ Marlins May 2, 2014: Ryu’s Gone, Is Zach Lee Coming?
Next Hyun-jin Ryu’s Previous Shoulder Injury