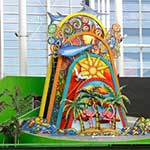 After a good night’s sleep, the Dodgers will hopefully look more awake against the Marlins. Tonight’s Dodger starter is Paul Maholm, who has to start pitching better if he wants to keep his job long-term. His K/9 is up to 3.28 (matched by his walk rate, which is the same). He looked a bit better in his last start, but at some point he needs to start striking out more batters. His FIP is over 5 and his xFIP isn’t far behind. Since Hyun-jin Ryu is on the disabled list, Maholm will have at least two more starts in the rotation before a potential move back to the bullpen.

Speaking of the bullpen, it’s pretty well rested tonight thanks to Josh Beckett and Jose Dominguez combining to pitch the full game yesterday. It’s hard to understate how important that performance was. Dominguez is probably unavailable tonight, but everyone else should be ready to go. Hopefully they can manage to get another day off for Kenley Jansen.

Starting tonight for the Marlins is Jacob Turner. Turner has been up and down a bit over the past few seasons, finally sticking for over 100 innings last year. His biggest issue has been control; he walked 4.12 batters per nine innings (over 10% of the batters he faced) during his 2013 campaign. He features a low-90s fastball and sinker and a standard mix of off-speed pitches (slider, curve, change). Turner has only made one start this year. This is his first game after missing nearly a month with a sprained pitching shoulder. He’s only two seasons removed from being Baseball America’s number 22 prospect and is only 22 years old, so he still has potential to improve.

The Dodgers hitters will need to be patient against the wild right-handed pitcher. Tonight’s lineup is more or less as-expected. Carl Crawford, in the middle of a terrible slump, mercifully gets the night off. It appears that Miguel Olivo is now the primary catcher, starting his third game of the last five.

While we still don’t (officially) know who is replacing Ryu tomorrow, there have been a couple of positive developments on the injury front today. Chad Billingsley played catch for the first time since being shut down with pitching elbow tendinitis. With Stephen Fife going tomorrow, it’s hard not to think about how Billingsley would have been close to ready had his rehab gone smoothly. Clayton Kershaw threw a bullpen session today, setting him up to come off the disabled list and start on Tuesday in Washington.