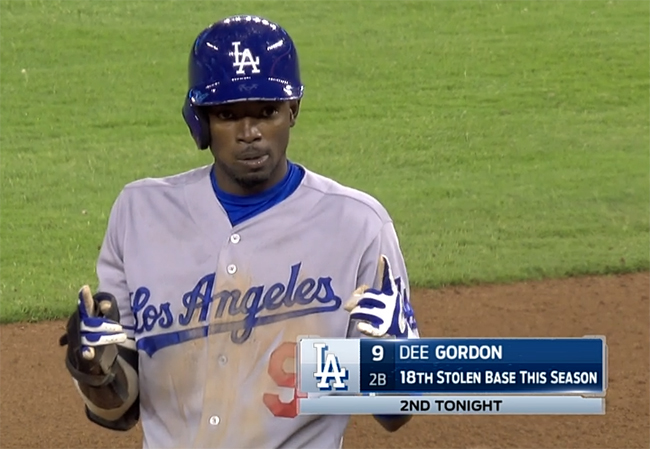 The real story tonight is Dee Gordon and the bullpen, but … hold on a second.

Puig’s homer went to places normally reserved for Giancarlo Stanton (452 feet). The home run put a nail into starter Jacob Turner‘s coffin. He allowed six runs on nine hits, and the offense didn’t look fooled by him at all.

Like I said at the top, Puig’s bat flip and the bullpen meltdown shouldn’t distract from another outstanding game by Gordon. He had five hits, stole three bases, scored two runs, and drove in two more. He also made an outstanding defensive play, throwing out Casey McGehee at third base after a great stop on a ball up the middle. A ball booted in the tenth inning didn’t wind up hurting the team. After a miserable double header in Minnesota, Dee has eight singles so far against the Marlins.

Paul Maholm preceded the bullpen’s eventful night by pitching pretty well. He lasted six innings, struck out three batters (raising his season K/9 to 3.52), allowing eight hits and three runs. Two came on solo shots by men named Jeff (Baker and Mathis). Stanton nearly added another on a long fly ball despite completely shattering his bat. That man is not human. I’d still like to see more missed bats by Maholm, but three runs in six innings is all you can really ask for from a number five starter.

After Maholm was removed with a four run lead, things went downhill, starting with Brian Wilson. Actually pitching inside for once, he hit Adeiny Hechavarria and walked Stanton on four pitches off the inside corner. With two outs, he faced Marcell Ozuna. He returned to pitching outside, but after eight pitches to Ozuna he left one over the plate. Ozuna made him pay, depositing the ball over the left field fence and pulling the Marlins to within one run. Wilson’s ERA is now 12.81 and his FIP is 8.34.

After J.P. Howell got the final out in the seventh, Chris Withrow came in and made things even more tense, loading the bases with two outs in front of Giancarlo Stanton. With everyone’s hearts in their throats, Withrow found his rhythm and struck out Stanton on three pitches.

Chris Perez was tasked with closing the game out, drawing speculation from some that he has replaced Kenley Jansen as the team’s regular closer. That’s ridiculous, by the way, the Dodgers just saw fit to give Kenley an extra day off after throwing 34 pitches two days ago (though, this situation would be avoidable if Jansen wasn’t used in as many three-run games). Of course, if there was a closer controversy it didn’t last very long. Perez allowed the tying run to score, stranding the bases loaded in the ninth inning (with three balls!) as the game continued into extra innings.

And then, the unexpected. Brandon League (who might be the third-best reliever right now – bullpens are weird) got through the heart of the Marlins order in the tenth, then Carl Crawford hit a two run shot into the second deck in right field. That’s the first real production we’ve seen from Crawford, and it couldn’t have come at a better time. League, mercifully, ended the game with a quiet 11th inning.

After nearly giving up the game, the bullpen will be tired before Stephen Fife‘s spot start. At least the Dodgers won’t be facing Jose Fernandez immediately after what would have been a crushing loss.