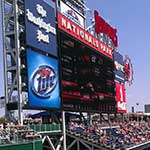 Two of the projected heavyweights in the National League have split the first two games of this 3-game series, and it would appear the Nationals have the upper hand against the Dodgers in the rubber game — a game that won’t start on time because of rain. Yay East Coast weather!

Dan Haren has pitched well this season, even if he got touched up a bit in his last start. Stephen Strasburg has a major league-leading 13.0 strikeouts per nine innings, so naturally, the Dodgers will score a half-dozen runs off him today (that’s how it works, right?).

The Dodgers’ offense came to life on Tuesday night, thanks in large part to Drew Butera, who is doing his damnedest to prove to the doubters (basically, everyone outside the Dodgers’ organization — or just anyone not named Ned Colletti) that he is worth a 25-man roster spot in the majors.

Seriously, Butera hit five home runs in his first 541 plate appearances as a pro, and hit 24 in 1,829 minor-league plate appearances. In 2014, he has two home runs in 41 plate appearances. His OPS+ coming into the season was 36 (100 is average). This season, it’s 71, pending the update from last night’s game. He also has a better-than-average 105 wRC+. It doesn’t mean much, but he’s providing much more offense than Tim Federowicz and is filling in — for him — admirably in the absence of A.J. Ellis.

Drew of the house Butera. Long may he reign!

(As long as he’s hitting)

Except for today, because Miguel Olivo is getting the start instead of Butera. Either way, neither stand much of a chance against Strasburg.

Yasiel Puig is back in the lineup after crashing into the right field wall in Miami on Sunday. I thought he might get the day off, considering the Dodgers start a big 4-game series at home against the Giants on Thursday. But Puig in the lineup is never a bad thing.

After the game, check out the latest episode of the “Dugout Blues” podcast. It should be posted by noon AHT.

That is, if iTunes hasn’t taken it down yet…

Dustin Nosler began writing about the Dodgers in July 2009 at his blog, Feelin' Kinda Blue. He co-hosted a weekly podcast with Jared Massey called Dugout Blues. He was a contributor/editor at The Hardball Times and True Blue LA. He graduated from California State University, Sacramento, with his bachelor’s degree in journalism and a minor in digital media. While at CSUS, he worked for the student-run newspaper The State Hornet for three years, culminating with a 1-year term as editor-in-chief. He resides in Stockton, Calif.
@DustinNosler
Previous Dodgers 8, Nationals 3: Kershaw Still The Best
Next Nationals 3, Dodgers 2: Early Runs … And Then Nothing