Isotopes @ Grizzlies: This Is A Real Triple-A Game You Can Watch 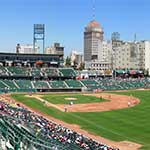 There’s no Dodger baseball tonight, but that doesn’t mean there isn’t Dodger-related baseball tonight. As announced last month, the CBS Sports Network — which is a thing, I guess — will be showing a selected minor league game each week and tonight, live from Chukchansi Park in Fresno, it’s your Albuquerque Isotopes:

Although, as I make the joke about what CBS Sports Network even is, I’m now honestly wondering if more of you get it than get SNLA. Huh.

Anyway, it’s an interesting opportunity to see some of the Triple-A players that will be making an appearance in Los Angeles later this year, or in some cases, already have. (Or in other cases, never will.) You should of course be reading our friend Chris Jackson’s daily dispatches from Albuquerque, but if not, it’s been a bit of an uneven start for the ‘Topes, sitting at 18-21, 10 games out in the division.

Of course, I can’t say that minor league records are all that important; what you care about are the prospects likely to make an impact with the big league club, and with that, the news has been very good. Joc Pederson has hit .359/.477/.648 with 11 homers and 11 steals, though he’s still carrying a hilarious wOBA platoon split of .540 against righties and .332 against lefties. (Also, can we just make an agreement now that I don’t need to point out ABQ and PCL impact on hitting numbers every single time, please? Please?)

For many, it might be your first look at Alex Guerrero, hitting .326/.386/.554, though of course we’re all far more interested in how he looks on defense. Sadly enough, we won’t be seeing Zach Lee (a somewhat-disappointing 27/12 K/BB in 41.1 innings) or old friends Stephen Fife or Matt Magill on the mound tonight; that honor goes to Carlos Frias, who you do not know and don’t really need to know. Don’t forget, familiar faces Jose Dominguez & Paco Rodriguez are in the Albuquerque bullpen, as is Colt Hynes, who I’m constantly told isn’t very good yet somehow has a 77/5 K/BB over the last two years.