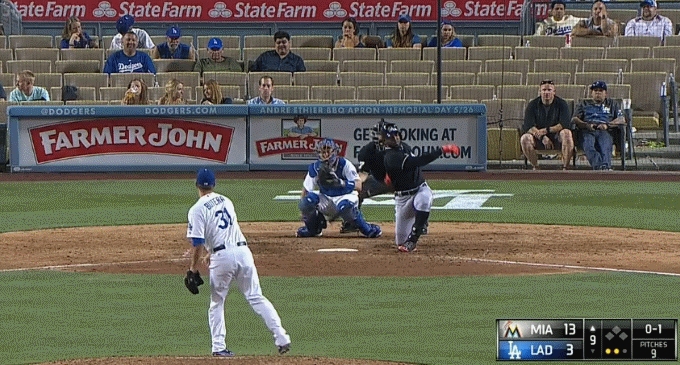 Yes, the Dodgers were routed last night, 13-3, but Butera was a rare bright spot, pitching one perfect inning that included a strikeout punctuated by 94 mph heat. This wasn’t Butera’s first rodeo though, as he had previously pitched a scoreless, no-hit inning for the Twins in 2012, walking one but also striking out one. So this was a season debut, not an MLB debut (all elite pitchers have a track record of success, after all), but as far as season debuts go, it’s hard to imagine a better one.

Butera started the appearance off facing Christian Yelich and the top of the Marlins order. He quickly pumped in back-to-back strikes with a “fastball” at 82 and 83 before missing with an 84 mph fastball out of the zone.

He then threw a 74 mph change that Yelich lined to Andre Ethier in center, giving the Marlins lineup a brief flash of his intimidating out-pitch.


Ed Lucas was up next, and Butera showed that he wasn’t messing around, pumping his fastball up to 88 mph that missed for a ball. Instead of going with the same pitch though, he came back down to 80 for a strike on the outside corner to a baffled looking Lucas. Pitching backwards there in his season debut, Butera showed the advanced approach and confidence that makes him one of the best in baseball.

He then missed again at 86 before getting a confused Lucas on an 83 mph pitch that he couldn’t have timed if he tried.

Before we get to the final batter Butera faced, let’s talk about his mechanics.

Butera has a fluid motion and has plenty of athleticism, which allows for easy repeatability. He uses solid posture to develop his 3/4 arm slot that helps give run to both his fastball and change. Unbelievably, even elite pitchers like Butera have room for improvement, as he has mediocre momentum and he could develop a better downhill plane if he would keep his front-side tight and finish pitches. Also, his lack of a consistent arm circle provides concern about his timing and deception.

So while you soak in how great he is now, just dream about the potential Hall Of Fame talent we have here on the Dodgers should he eventually fix these errors. The sky is the limit in terms of his ceiling, especially since he has an 80-grade face.

Back to the game, the final batter Butera faced was poor Marcell Ozuna. To start, Butera ramped his fastball up to 90 mph for a strike. And then in a cruel, unfair way, he dropped a 74 mph change with sink and fade down in the zone.

For his coup de grace, Butera went up the ladder with a 94 mph fastball, both coming with the extra oomph AND changing Ozuna’s eye level with a running fastball.

And that, ladies and gentlemen, is a masterclass in relief pitching.

“I blacked out, I don’t know what happened,” Butera joked about his last pitch. “I was trying to not to get hurt and throw strikes. My last hitter was Ozuna and I had an 0-2 count so I figured why not let one go?”

“It’s just the fact that they have no idea what I’m throwing out there. It’s almost like taking BP, you’re so comfortable out there, next thing you know you’re out.”

And that’s how you finish up your flawless outing: with CLASS.

Unfortunately, Butera now needs 724 days of rest before he can go again, but he’s slowly building up arm strength so the team hopes eventually he can go every year.