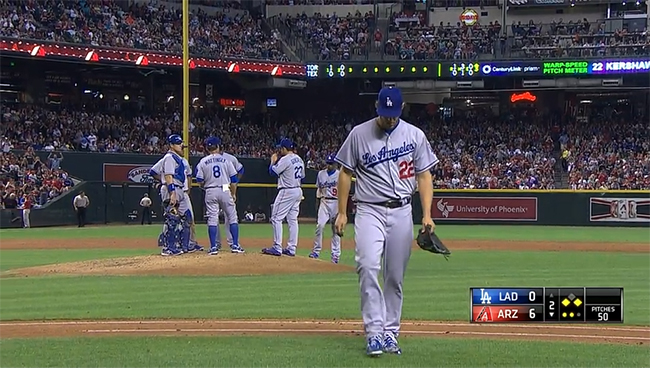 Tonight’s game was terrible. Then it wasn’t. Then it was even worse. Baseball, right? After the emotional roller coaster, the Dodgers fell to the Diamondbacks by a score of 18-7.

The bottom of the second inning started with a four pitch walk to Cody Ross. Martin Prado drove a chopper directly into the chalk about 20 feet in front of the plate, but it ended up over Adrian Gonzalez‘ head and down the first base line. Kershaw followed up the weak hit by striking out Alfredo Marte on a beautiful curveball. Then, the wheels fell off. Cliff Pennington tripled on a hanging 0-2 curve. Tuffy Gosewisch singled him in on a first-pitch fastball. After a sacrifice bunt by Chase Anderson, Pollock and Owings hit back-to-back triples, one on a slider and one on a fastball. Paul Goldschmidt doubled on a 2-2 curveball, then Kershaw balked him to third before he walked Ross for the second time of the inning. Kershaw was pulled after throwing 40 pitches in the second inning, and to add insult to injury Jamey Wright allowed an inherited runner to score after Kershaw departed.

After all was said and done, Kershaw recorded five outs, and allowed seven runs while walking two (Ross both times) and striking out three. He allowed six hits, four of which went for extra bases. As for the cause of his issues tonight, it wasn’t clear-cut. As much as pitch sequencing has been brought up lately, I don’t buy it. His sequencing is similar to how it has been ever since he developed his slider in 2011. Really, it seemed like he just left his pitches up and couldn’t control any of his three main offerings. Kershaw’s curve is unhitable if it’s near the dirt, but if it’s up in the zone batters will take advantage. His velocity was fine, so it seemed like just a bad day rather than an injury. These things happen. Kershaw’s disaster start raised his 2014 FIP all the way to 1.56 and his xFIP all the way to 1.91.

To the offense’s credit, they didn’t go down without a fight. They scored five runs off of Chase Anderson, who impressed at times with his good change. Puig hit a homer to left-center in the third inning (the same fan who caught that ball later caught another homer hit by Owings). Carl Crawford hit a three run blast in the sixth, chasing Anderson after 5-1/3 innings.

The offense scored two more runs in the sixth and brought the tying run to the plate multiple times in the sixth and seventh innings. Matt Kemp just missed tying the game at 10 in the seventh, hitting a fly ball to the warning track in straightaway center. The game was within two runs at its closest. The Dodgers failed to drive in runners who were in scoring position with nobody out three times in the game, which would have been the difference if the game stayed close.

Entering the game with a score of 9-7, Chris Withrow allowed five runs to score in 1-2/3 innings of work. The dagger was Paul Goldschmidt’s three run shot in the seventh, which put the Dodgers away for good. Withrow’s peripherals finally caught up with him tonight. It might not be the worst idea in the world to send him back down to Albuquerque to work on his control issues, though after two walks and a homer allowed tonight his FIP isn’t disastrous.

Even Drew Butera, Elite Reliever wasn’t enough to stop the bleeding. He allowed a two run shot to Goldschmidt, but at least he struck out Prado. It was good for some comedic relief, at least, which is what we all need after the Dodgers gave up more than 13 runs for the second time in three games. When all was said and done, the Dodgers allowed 13 extra-base hits, their most since 1954.

Tonight’s loss didn’t cause the Dodgers to fall back in the standings, since the Giants and the Rockies both lost as well. The Dodgers will try to salvage a series win tomorrow afternoon behind Dan Haren at 1:10PM.