Diamondbacks 5, Dodgers 3: A Series To Forget 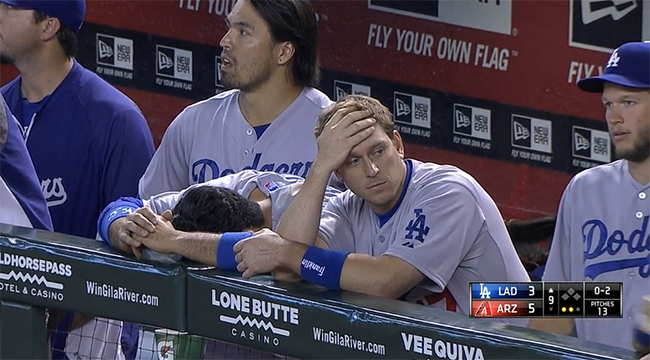 Dan Haren was hit pretty hard tonight, though the defense didn’t help much at the beginning. In the second inning, Dee Gordon made a great leaping catch (his first of two outstanding defensive plays today), but Cody Ross doubled off of Yasiel Puig‘s glove after Puig got a bad jump. A.J. Pollock hit an infield single to Juan Uribe, who took too long to throw the ball. As if that wasn’t enough, Hanley Ramirez threw the second leg of a double play past first to allow a run to score. Things didn’t go better for the defense in the third inning. Gerardo Parra hit a ball through Haren’s legs, then Haren threw a pitch through Butera’s legs. Parra scored on a Chris Owings single.

It’s hard to complain much about the defense when home runs are hit, though. Ross hit a booming homer to straightaway center in the fourth inning. Eric Chavez, who was put into the game after Martin Prado was removed due to blurry vision, hit a two-run shot in the fifth. Haren made it through six innings, allowing five runs (four earned). He struck out three batters and walked none. Haren has just seven strikeouts in his last three starts. After Haren’s departure, the Brandon League Redemption Tour continued with another two scoreless innings, giving the bullpen some much-needed rest.

After Collmenter was removed, the offense was quiet until the eighth inning. Ramirez reached on an error, then Gonzalez hit an infield single. Andre Ethier singled to right field, but Hanley did not score despite the fact that Lorenzo Bundy was waving him in. The throw went to second, so Hanley would have been safe. Matt Kemp lined to second to end the threat. The Dodgers failed to score in the ninth, so Hanley’s mistake didn’t impact the outcome of the game.

Yasiel Puig went hitless today (though he was hit by a pitch in the eighth inning) snapping his hitting streak after 16 games.

The Dodgers will now travel to New York to face the Mets. Josh Beckett will face off against the young Rafael Montero on Tuesday evening. A day off sounds pretty good right now.

Daniel Brim grew up in the Los Angeles area but doesn't live there anymore. He still watches the Dodgers and writes about them sometimes.
@danielbrim
Previous Dodgers @ D’backs May 18, 2014: So Long, Arizona
Next What Will The Dodgers Do With Dee Gordon & Alex Guerrero?