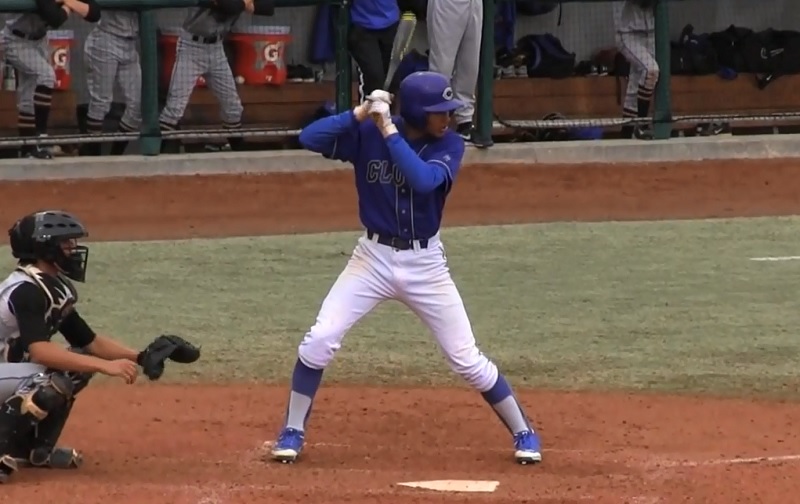 This is the second in my series of 2014 MLB Draft profiles. This time, I look at the powerful Jacob Gatewood from Clovis High School in California.

Gatewood has been mocked to the Dodgers by MLB.com and MLB Draft Insider.

It’s no secret, I love power. My unhealthy mancrush on Giancarlo Stanton is based mostly on his 80-grade power (oh, and he’s really good at baseball). If there’s anyone with Stanton’s power potential in this 2014 draft class, it’s Gatewood.

Gatewood is a big kid at 6’5, 190 with room to fill out. While he plays shortstop on the prep level, there’s almost no chance he remains there as a professional. He’s just too big. It’s a Corey Seager-like situation in terms of their body types and defensive profiles. Gatewood has plenty of arm to move to third base, and some have even suggested he could end up in right field. He was clocked at 95 MPH from the mound last year, so his arm strength isn’t a concern.

There’s a ton of swing-and-miss in Gatewood’s swing. As is what happens with tall players, his swing can get long at times and he can get beat inside. His pitch recognition needs improvement, but he’ll never be mistaken for Jose Bautista when it comes to strike zone judgment. But his power is legitimate.

He has a surprisingly shortened load from his slightly open stance. His leg kick isn’t dramatic and he’s able to clear his hips before he brings the bat through the zone. It’s a classic power-hitting stroke. He holds his hands near his ear before bringing them down when he starts his swing. There’s a little hitch, but his quick hands and elite bat speed make up for that.

Gatewood has 80-grade raw power, something that is quite tough to find in baseball. His timing mechanism is a now-classic toe tap that allows him to bring the bat through the hitting zone. He has great bat speed that allows him to make up for less than perfect swing mechanics. He’ll drop his back shoulder to generate even more natural lift and backspin on his swing and the balls he hits. He has tremendous power to all fields. Like many young hitters, he’s tripped up by breaking balls, hence the improvement needed in his pitch recognition.

He has surprisingly decent speed for a kid of his size. It’s more straight-line speed than anything, but it isn’t like he’s a below-average runner.

Gatewood’s school is in one of the toughest conferences in the state, if not the country, so the competition he faced was legitimate.

Gatewood has a Dodger connection as strong as Derek Hill’s. Henry Gatewood was the Dodgers’ first-round pick in 1982, and we know how Logan White loves his bloodlines.

Gatewood is a surefire first-rounder, despite being committed to USC. It probably wouldn’t take more than the Dodgers’ slot recommended amount to ink Gatewood, who would instantly become the best power-hitting prospect in the system. He’s only 18 years old, so he wouldn’t see Los Angeles for awhile. If I had to guess, he’d be tried at third base to see if he could handle it. If not, the Dodgers would move him to the outfield, where his bat will definitely play.

Gatewood is No. 4 on my big board, and I’d be more than happy if the Dodgers popped him at No. 22.

Dustin Nosler began writing about the Dodgers in July 2009 at his blog, Feelin' Kinda Blue. He co-hosted a weekly podcast with Jared Massey called Dugout Blues. He was a contributor/editor at The Hardball Times and True Blue LA. He graduated from California State University, Sacramento, with his bachelor’s degree in journalism and a minor in digital media. While at CSUS, he worked for the student-run newspaper The State Hornet for three years, culminating with a 1-year term as editor-in-chief. He resides in Stockton, Calif.
@DustinNosler
Previous Mets 5, Dodgers 3: A Very Puig Night
Next Mailbag #4: Trade Kemp, Watch SNLA, Bring Back Beltre, Platoon Pederson?