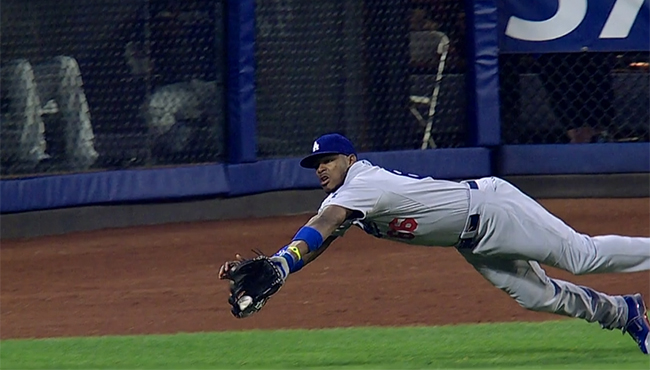 I’m starting to lose count of the number of times I’ve had to lead off a recap with Yasiel Puig, but…

Just incredible. One of the best catches you will see all year by anyone in the majors. The combination of jump, range, and the finish – perfect. Ken Rosenthal pointed out on twitter that Citi Field has the new MLBAM advanced tracking system installed, so hopefully we’ll get to see the data applied to that catch in the future.

Oh yeah, and there was a baseball game today too. Zack Greinke definitely didn’t have his best stuff. He struck out four batters in five innings, but he walked two. He had just seven swinging strikes in 101 pitches, well below his average rate. More importantly, he gave up three runs, snapping his streak of 21 straight starts allowing two runs or fewer. Only one run was earned, so his streak of starts allowing two earned runs or fewer has grown to 22 consecutive games.

Greinke never really looked comfortable on the mound; his body language was very agitated at times. He left a lot of pitches up in the zone and batters made solid contact. Other than the Puig catch shown above, the Dodgers were shaky with the leather behind him, which didn’t help. Earlier in the second inning, Kemp failed to chase down a fly ball which a better center fielder might have caught, then allowed Curtis Granderson to advance an extra base after bobbling the ball. Granderson later scored on a sacrifice fly. The third, streak-snapping run scored after Justin Turner dropped a routine grounder hit by Daniel Murphy. Jon Niese, who hit a double earlier in the inning, scored on the play which would have been the third out of the inning.

Niese kept the Dodger bats very quiet through six innings. They scored one in the top of the first after Chone Figgins and Justin Turner singled and an Adrian Gonzalez hit a sacrifice fly, but that was it until the seventh. Niese walked Scott Van Slyke, then Justin Turner made up for his error in a huge way, hitting his first home run of the year to left. The homer evened the score at three. Niese lasted seven innings, allowing the three runs while striking out five and walking three.

That was it for the Dodgers offense, partially stifled in the late innings by two Puig baserunning mistakes. The first error was on an infield fly rule, which in fairness could have been communicated better by the umpires. In the eighth inning, Puig doubled off the centerfield fence with one out. Following Puig, Hanley Ramirez hit a line drive to Eric Campbell, who made a very nice diving catch in left field. Puig was running on contact and was easily doubled up at second to end the inning. Isn’t it just like Puig to make an amazing play and frustrate people all in the same night?

Ultimately Puig’s gaffes wouldn’t have offset Chris Perez‘ rough night. With Brian Wilson and Kenley Jansen both unavailable, Perez was brought in the pitch the seventh and the eighth innings. The seventh would have gone smoothly if he didn’t throw a wild pitch to Anthony Recker, who was attempting to bunt. Wilmer Flores later scored on a two out single by Juan Lagares. The eighth didn’t go much better, but Perez wasn’t helped by another Kemp defensive miscue as he jumped for a fly ball which he completely misjudged. Perez ended the night after giving up two runs. Paul Maholm made his relief debut after Perez was pulled with one out. Maholm allowed a fielder’s choice and got a rare strikeout to clean up Perez’ mess.

Following tonight’s loss, the Dodgers will head to Philadelphia. Clayton Kershaw faces off against Roberto Hernandez tomorrow at 4:05 Pacific Time.

Daniel Brim grew up in the Los Angeles area but doesn't live there anymore. He still watches the Dodgers and writes about them sometimes.
@danielbrim
Previous Dodgers @ Mets May 22, 2014: Zack Greinke, If Weather Permits
Next 2014 MLB Draft profile: SS/3B/OF Jacob Gatewood, Clovis HS