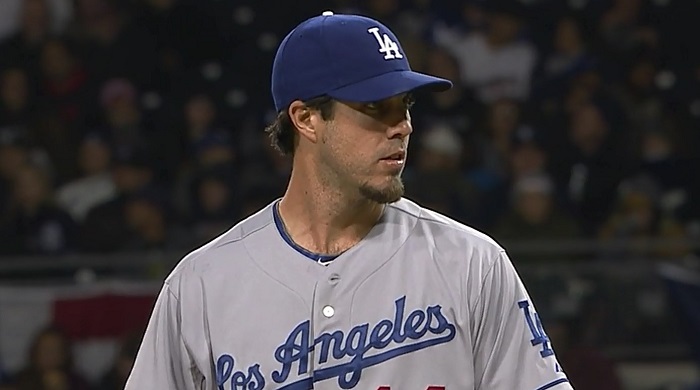 The first two runs of the game were unearned and happened in the first inning. Haren allowed Ben Revere to hit a double. A.J. Ellis dropped a foul pop fly hit by Chase Utley and Utley made the Dodgers pay, hammering a cutter over the plate for a two run homer. I’m not a huge fan of the unearned run concept; the home run pitch was still Haren’s fault.

Haren labored through the second, too, but then he entered the second “half” of the start where he only allowed one unearned run (forced by a debatable umpiring call). In the first two innings, Haren only induced two swinging strikes and one missed bunt attempt. In the last four innings, Haren induced eleven swinging strikes. When all was said and done, he allowed five runs (two earned) while striking out seven and walking two.

After Haren was removed from the game, Paul Maholm made his second relief appearance after being demoted from the starting rotation and threw two scoreless innings.Maholm has struck out four and walked none (though he did hit Marlon Byrd in the shoulder) since the Dodgers sent down Chris Withrow earlier this week.

On the other side, David Buchanan limited the Dodgers to two runs during his spot start. He struck out two batters and walked none. He probably could have gone further into the start if needed, since he only threw 66 pitches to get through five innings, but the Phillies opted to use a left-handed pitcher against the meat of the Dodgers’ order. The scoring against Buchanan was relatively quiet, too. Justin Turner hit a double and scored on a groundout in the fourth inning, and Erisbel Arruebarrena scored his first major-league run (shortly after his first major-league hit) after a two out single by Dee Gordon in the fifth.

Arruebarrena was inserted into the lineup at the last minute today after a late scratch of Hanley Ramirez. Ramirez has a “mild calf strain,” per the Dodger broadcast and is now day-to-day (UPDATE: Hanley was not available to pinch hit and Don Mattingly does not know the severity of the injury, neither of which are great signs). Arruebarrena had another quiet game on defense, but made a nice play on a pickoff to second which probably saved a run. After a missed bunt attempt, Ellis threw back to second to pick off Carlos Ruiz. While the play is credited to A.J. in the box score, Arruebarrena made a very nice scoop and tag on the throw from the catcher. The runner behind Ruiz (Cesar Hernandez) ultimately scored while Haren labored, so converting that out was very valuable.

Yasiel Puig tacked on an additional run by himself in the sixth after he hit a triple and scored on a passed ball and the Dodgers threatened against Jonathan Papelbon in the ninth, but that was it for the offense. The Dodgers will try to salvage a series win against A.J. Burnett tomorrow morning.