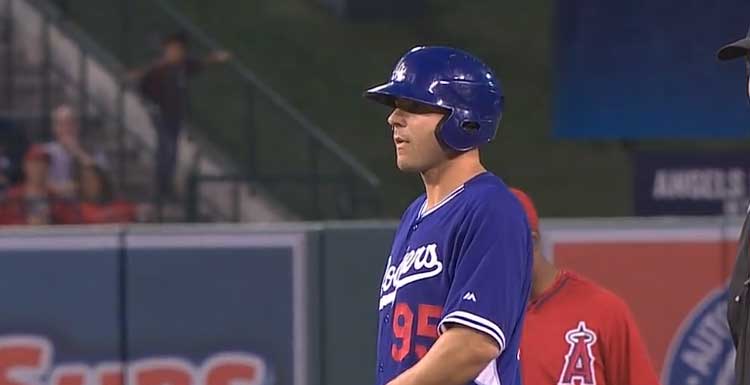 The Dodgers made two moves today, and neither one involves Matt Kemp. Yet. (I’m kidding, but if he’s sitting behind Scott Van Slyke against righty Homer Bailey tonight…)

First things first, the more expected move: Carl Crawford has been placed on the 15-day disabled list after last night’s gruesome-looking ankle injury, and four-corners guy Jamie Romak has been called to the bigs for the first time in his career. This was never likely to be Joc Pederson, though there was some thought it would be Mike Baxter, who was with the team earlier this year and has previous big league experience, but Romak’s hot hitting (10 homers in May alone in Triple-A) and ability to play third seems to have won out. The Dodgers had a spare spot on the 40-man roster, so no one had to be DFA’d.

Romak was drafted by the Braves in the 4th round all the way back in 2003, and stayed with them through 2006 before being traded in the Mike Gonzalez deal to Pittsburgh for 2007. After three years there, never rising above Double-A, Romak began the whirlwind journey of a minor league lifer: Single- and Double-A for Kansas City in 2010/11, 2012 split between the Kansas City & St. Louis organizations, and 2013 in Triple-A for the Cardinals.

Here’s what I said when he signed with the Dodgers in November:

He’s gone unclaimed in the Rule V draft at least once, and has never made it to the bigs, so that should tell you something about him. He hit 22 homers for St. Louis’ Triple-A team last year, along with a ton of strikeouts, but the Albuquerque roster is so thin that having someone with positional flexibility is worthwhile.

He’s primarly been a right fielder, but he also has plenty of time at first and third as well, with most of his Triple-A time this year coming at the hot corner. Romak appeared in five spring games for the Dodgers; when he pinch-ran for Chone Figgins in Anaheim on March 29, Vin Scully remarked, “yeah, I don’t know him either.” So, there’s that, but here’s one of the homers he hit just a few days ago:

We knew someone would come up for Crawford, but the other move was a bit unexpected: catcher Johnny Monell has been acquired from Baltimore for “cash considerations.” Monell was a 30th-round pick of the Giants in 2007, briefly reaching the bigs for nine plate appearances last year, before being “purchased” by the Orioles in the offseason. He was DFA’d to open up a 40-man spot for Steve Lombardozzi, then cleared waivers and reported to Triple-A Norfolk. This is all a result of the Padres trading for Nick Hundley, which pushed Steve Clevenger to Triple-A and Monell out of a job.

Monell was hitting a mere .209/.280/.286 in 100 plate appearances for Norfolk, though he does have some pop, with at least 10 homers in each of the last four years, and he appears to be a great fit in at least one way: the man knows how to flip a bat.

Of course, Monell is a Dodger (well, Isotope) less for what he is than what he represents, which is catching depth. With Miguel Olivo exiled and A.J. Ellis sidelined, the Dodgers have Drew Butera & Tim Federowicz on the big team and Griff Erickson & John Cannon in Triple-A. Don’t feel bad about not knowing who Cannon is; he’s a 29th-round pick in 2012 who got into all of seven games for Rancho Cucamonga last year. Much like Steve Cilladi once was, he’s merely an extra guy floating around to where you need him. With the team once misplaced foul tip away from catching disaster, Monell at least gives you some breathing room.

Mike writes about lots of baseball in lots of places, and right now that place is MLB.com.
@mike_petriello
Previous Crawford set for DL with ugly ankle injury, Kemp needs to speak up for playing time
Next Reds @ Dodgers May 28, 2014: Matt Kemp, Welcome Back