Reds 3, Dodgers 2: Puig Still The Best, And What Was That Bunt? 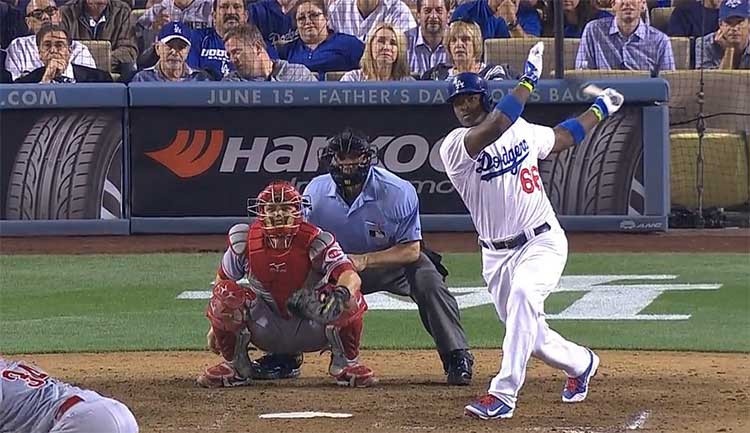 Shortly before game time, I tweeted that Yasiel Puig, over the previous month, was hitting .417/.521/.740, easily the best mark in baseball, and that’s really saying something when you consider what Troy Tulowitzki and Nelson Cruz and Edwin Encarnacion have been doing lately.

Since Puig reached base just once in four plate appearances, I suppose that batting average and on base percentage will go down. I’m not so sure about the slugging percentage, though, because in the sixth inning, Homer Bailey hung a pitch over the middle of the plate, and, well, that’s just not something you want to do to the hottest hitter in the game (via Chad):

It was, as noted elsewhere, Puig’s 30th career homer in just his 152nd career game. It’s absolutely inconceivable what he’s done, and is doing. Just shy of his first anniversary as a big leaguer, it’s pretty difficult to argue that he isn’t one of the five best players in the game… or better.

Oh, and the Dodgers lost 3-2, because Homer Bailey limited the Dodgers to just five hits, one of which came off the bat of Clayton Kershaw himself, and because Kershaw was merely very good as opposed to perfect. That’s right, “very good,” despite the fact that he allowed five extra base hits tonight, which will probably set off some folks that there’s “something wrong with Kershaw.”

Well, guess what: there’s not. Here’s the five extra-base hits he allowed:

1) 1st, Todd Frazier double — a hard-hit ball, but a well-placed grounder past Justin Turner at third
2) 1st, Brandon Phillips homer — a well-struck ball that was put exactly where Kershaw wanted it; Phillips was ready for it
3) 2nd, Brayan Pena double — a blooper to right that fell in no-man’s land between first, second, and right field; Puig very nearly threw Pena out anyway
4) 6th, Frazier double — no excuses here, a hard-hit ball off the left field wall
5) 7th, Billy Hamilton double — another well-placed lineer just past Turner, by the fastest man in baseball

He also struck out nine against one walk, good for a 46/7 K/BB this season, and did this to Hamilton (via Brim):

And that one walk, to Devin Mesoraco? It came on a curveball, and of course in a three-ball count. As Brim was kind enough to point out, that’s just the second time since 2010 — more than 1,300 curveballs in that span– that Kershaw has thrown a curve with three balls. Unfortunately, he missed with it; it’s certainly not what Mesoraco was expecting there, I imagine.

Anyway, here’s your takeaway: Kershaw is still incredible. I’m not worried about him. In the least.

And then, the clusterf*ck that was the eighth inning. Dee Gordon led off with a walk… and then Andre Ethier laid down a sacrifice bunt. As Gordon was stealing second. This was an insanely infuriating play for no shortage of reasons, to the point that I’m not even sure it’s on Don Mattingly. If Ethier were just sacrificing to move Gordon into scoring position, that’d be bad enough, because Gordon is the best basestealer in the game, and all you’ve done is open up first base for the Reds to intentionally walk Puig. (That the Reds and Jonathan Broxton chose to pitch to Puig was a surprise to me.) If that’s all that was happening, then I think we’d all safely put that on the manager, because it would be so, so dumb.

Except… when Ethier put the bunt down, Gordon was going. He had the base stolen easily. Walking back to the dugout, Ethier looked completely perplexed. Even Mattingly wouldn’t make that kind of call, presumably. His idea was terrible, but the play that went into motion was even worse. I’m sure we’ll learn more about it in a bit, but my best guess is that this was Gordon’s mistake, though I’m not certain what kind of mistake it was. If he was just running on a sac bunt, that’s silly,  yet didn’t change anything. If he was supposed to keep on running to third, hoping that Ethier’s sac bunt would be so outstanding that it’d work, it’s at least mildly clever, but also not brilliant. It just looked worse than it needed to be. Instead, Puig flew out to deep right, and then Hanley Ramirez flew out to short right. Gordon never got past third. In the ninth, the tying run never got past first.

Matt Kemp played left field, going 0-4, although he reached when Mesoraco couldn’t handle a third strike. He didn’t make any putouts in the field, nor did he really have the opportunity to (it would have taken an unbelievable play for him to catch Frazier’s deep sixth-inning double.) The world did not end. This story still isn’t over.

Real tough night for Drew Butera, by the way, who had two passed balls and took a foul ball off the knee in the seventh inning. Normally, that’s not worth mentioning. Normally, a team doesn’t have their starting catcher on the disabled list and one of their backup options on the unemployment line for physically assaulting a teammate. Butera stayed in the game, however, though I bet Johnny Monell is not at all unhappy about where he ended up.

Hey, it could be worse! Single-A Rancho Cucamonga was no-hit tonight.