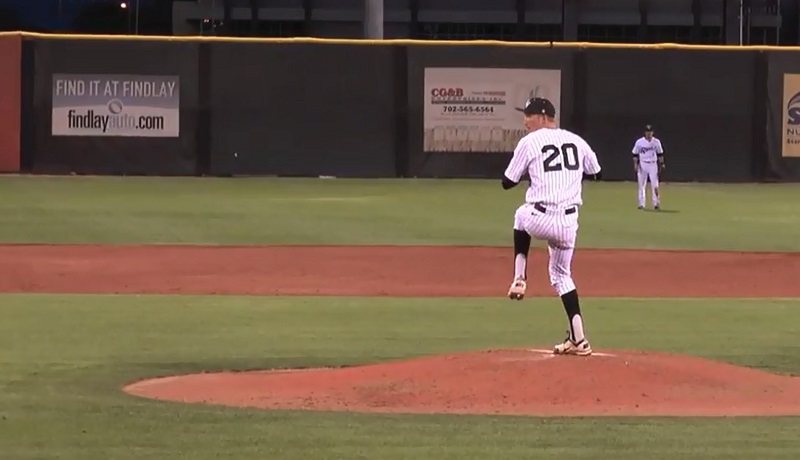 This is the sixth in my series of 2014 MLB Draft profiles. This is the first college player profiled, as I look at Erick Fedde from UNLV. There’s plenty of risk surrounding him.

We all know Logan White has an affinity for drafting prep (high school) pitchers, but since 2009, three of his five first selections have come from the college ranks — Aaron Miller, Chris Reed and Chris Anderson. So, it isn’t totally out of the realm of possibility the Dodgers would choose another college pitcher — especially if their new draft strategy holds true.

Erick Fedde is one of the best college pitchers available, and his name was bandied about as a potential Top-10 selection as recently as a month ago. In that time, Fedde blew out his elbow and has undergone Tommy John surgery. Despite that, he’s almost surely going to be a first-round selection.

Now, all this information is, obviously, from before he blew out his elbow. There’s no way to know if he’s going to get back to the level that made him a top draft prospect. The recovery rate is about 90 percent, so odds are that he will get back, but there’s always a chance he won’t.

Fedde uses a low-90s fastball that has been clocked as high as 95-97 MPH. It has good life and some movement, but most importantly, Fedde has really good command of it. Because of his lanky frame, it isn’t unreasonable to think he could add a little velocity to the pitch going forward. It’s definitely his best pitch and the one that gets most folks excited.

His slider is a great secondary pitch for him. It’s a plus-offering at 81-84 MPH. It has good tilt and depth and is absolutely a swing-and-miss pitch. At times, it can be inconsistent, but it has all the makings of a pitch that will serve him well in the professional ranks.

He also sports a potentially average changeup that should allow him to remain in a starting rotation. It’s a low-80s pitch that doesn’t have a ton of movement at present. Because it flashes average, professional instruction could help him refine the pitch and make it more of a legitimate offering down the road.

Fedde’s arm slot is closer to over-the-top than anything else, but reports state he can drop to about three-quarters when he fatigues. That causes his pitches to lose some of the life he would otherwise get — especially the fastball. His delivery is a little unorthodox at first, as he stands with a somewhat open stance (if you’re relating it to a batter), but once he gets going, it gets much smoother. It appears to be an easy enough delivery to repeat, but he struggles with it at times. He is pretty athletic on the mound, which plays in his favor.

The risk associated with this pick is unlike any other White has ever made (including the failed Luke Hochevar selection). The success rate of TJ surgery makes guys like Fedde and Jeff Hoffman (the latter more than the former) a surefire first-round pick. The Dodgers have experience with pitchers and TJ surgery, as draftees Chad Billingsley, Nathan Eovaldi, Ross Stripling and Chris Withrow all have undergone the surgery. Rubby De La Rosa also had TJ surgery, but he was an international signee. At best, Fedde wouldn’t make his professional debut until about June of next year, and that has to factor into the decision of any team when deciding if they want to draft him. The Dodgers know the risk involved and if they think they can get Fedde back to the level he has shown this year, they could definitely pop him at No. 22.

Fedde is a junior and could very well return to college if he doesn’t get the bonus he desires. But he wouldn’t be draft-eligible again until 2015, but more likely 2016, as he wouldn’t pitch much in college next season. If he’s a first-round choice, I have little doubt he’ll sign (especially for the Dodgers’ close to $2 million slot amount). Teams might try to cut a deal with him and try to save money, but there’s almost no way he signs for more than anyone’s slot recommendation if he’s draft in the first round. There’s a chance he could end up in the bullpen if he can’t develop his changeup further and/or has complications from the surgery. He’s ranked No. 5 on my Big Board, and it’d be a risk to draft him, but one that might pay off handsomely in the long run.

Dustin Nosler began writing about the Dodgers in July 2009 at his blog, Feelin' Kinda Blue. He co-hosted a weekly podcast with Jared Massey called Dugout Blues. He was a contributor/editor at The Hardball Times and True Blue LA. He graduated from California State University, Sacramento, with his bachelor’s degree in journalism and a minor in digital media. While at CSUS, he worked for the student-run newspaper The State Hornet for three years, culminating with a 1-year term as editor-in-chief. He resides in Stockton, Calif.
@DustinNosler
Previous Time To Step It Up, Dodger Bullpen
Next Pirates @ Dodgers May 30, 2014: That Is Certainly A Lineup