Pirates 2, Dodgers 1: That Was Awful 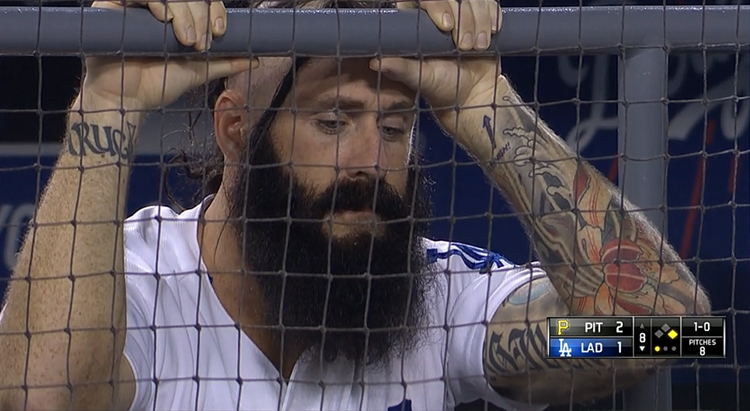 In the most frustrating way possible, the Dodgers lost their third consecutive game, dropping tonight’s contest against the Pirates by a score of 2-1.

The big story coming into tonight’s game was Josh Beckett throwing the first start after his no-hitter on Sunday. Dreams of Johnny Vander Meer were dashed quickly with a Russel Martin single in the top of the second.

Overall, Beckett didn’t look particularly sharp. He was bailed out from allowing more runs with some good luck and great defense. The big break came in the third. With runners on first and third and two outs, Beckett was pitching to Andrew McCutchen with a full count. Beckett struck out McCutchen on a “foul tip”, but on replay the ball clearly missed McCutchen’s bat and was well inside. Instead of loading the bases for Ike Davis, he had to lead off the next inning. Davis lead off the fourth inning with a 450 foot home run.

Drew Butera did his part for Beckett, too. He caught two runners stealing and made an excellent pickoff of Starling Marte at second base, which helped to prevent the third inning from getting completely out of hand. He contributed 20% of Beckett’s 15 outs. Beckett only made 88 pitches, which isn’t particularly surprising given that he threw 128 pitches last time. He struck out five batters, walked one, and hit one more.

Beckett isn’t the big story leaving the game, though. The real story was how bad the Dodgers offense was with runners in scoring position (sound familiar?). Some of the credit should go to Francisco Liriano, of course, who struck out nine batters in 5-2/3 innings of work. His changeup looked almost completely unhitable at times. However, the Dodgers failed to score leadoff runners on second base in the first inning, the fourth inning, the fifth inning, and the sixth inning. The context-neutral run expectancy with a runner on second and no outs is 1.05. Multiply that by four opportunities and the Dodgers would be expected to score about four runs given those situations. To score zero in those innings is beyond frustrating.

Nearly everyone besides Dee Gordon (who stole two more bases and started another amazing double play) shared the blame in the futility. Hanley Ramirez struck out twice with runners in scoring position. Yasiel Puig struck out and popped out. Matt Kemp struck out and grounded out. Scott Van Slyke struck out and hit a dribbler to the mound. Andre Ethier struck out once. Chone Figgins ran into his own bunt (at least, that’s what the umpires said). They finally broke through for a run in the eighth after a Figgins bloop single and a Hanley single to right, but the damage was already done.

If there’s any silver lining to this loss, it’s that the bullpen was not terrible tonight. Paul Maholm, Chris Perez, Brian Wilson, and J.P. Howell combined for four scoreless innings, allowing two hits, though they walked three and struck out two. This team has a new problem every night, it seems.

Tonight’s loss drops the Dodgers to 29-27. They’re now 7.5 games behind the Giants (who are on pace for 106 wins). Tomorrow’s game is at 4:15PM PT on Fox. Hyun-jin Ryu will face off against Brandon Cumpton in an attempt to right the ship.

Daniel Brim grew up in the Los Angeles area but doesn't live there anymore. He still watches the Dodgers and writes about them sometimes.
@danielbrim
Previous Pirates @ Dodgers May 30, 2014: That Is Certainly A Lineup
Next Three Dodgers Among ESPN’s Top 25 Prospects