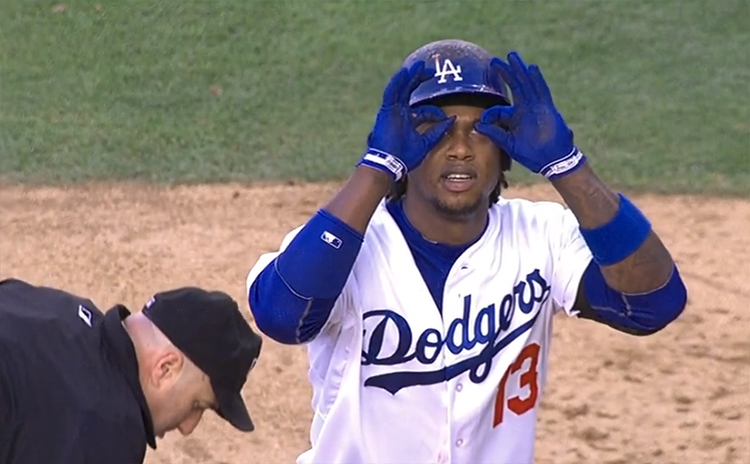 Last night, the Dodgers were awful on offense with runners in scoring position. They had scored six runs in the previous three games. Today, it was the exact opposite, as the Dodgers won by a score of 12-2.

The fun started immediately, as Hanley Ramirez and Matt Kemp drove in runs with singles in the first inning. The Dodgers added four more in the third inning, a rally started on an Andre Ethier “double;” Starling Marte caught a fly ball in left field and dropped it as he braced the wall about five seconds later, but Clint Hurdle had used his challenge on a close play at second base in the first inning.

The wheels came off for Pirates starter Brandon Cumpton in the bottom of the fourth. Dee Gordon tripled (and was tagged out at third on a Yasiel Puig grounder). Hanley Ramirez unloaded on a homer to right-center. That didn’t “kill the rally,” as Kemp, Adrian Gonzalez, and Justin Turner all hit singles. Turner’s single chased Cumpton, then Drew Butera tripled off of the top of the left field wall against reliever Jeanmar Gomez to drive in two more. Eleven runs (ten earned) were charged to Cumpton when all was said and done. Before tonight, Cumpton had thrown 49-1/3 innings in the majors and allowed sixteen runs. The Dodgers scored 40% of Cumpton’s career runs allowed this afternoon.

The most encouraging thing about today’s game was the offensive play by both Matt Kemp and Hanley Ramirez. Kemp entered the game with an 0-for-20 slump, but went 2-for-4 with a hard hit sacrifice fly today. Hanley has been struggling lately, but went 4-for-4 with two homers and now has six straight hits. He raised his 2014 wRC+ from 118 to 132 in one game. Both Hanley and Kemp struggled mightily with runners in scoring position yesterday, but turned it around today and helped propel the team to victory.

If the offense wasn’t better, we’d probably be talking a bit more about Hyun-jin Ryu‘s start. He allowed two runs (one earned), struck out four and walked none. He only lasted six innings, battling with the pitch count a bit all day. He allowed ten hits and only induced four swinging strikes. He wasn’t at his sharpest, but it didn’t really matter.

Yasiel Puig was one of the lone quiet spots in the lineup and appeared to tweak his ankle in the fourth inning. He was removed from the game in the top of the seventh, but Hanley Ramirez was removed at the same time so it was probably precautionary.

Jamey Wright got a save today.

Daniel Brim grew up in the Los Angeles area but doesn't live there anymore. He still watches the Dodgers and writes about them sometimes.
@danielbrim
Previous Pirates @ Dodgers May 31, 2014: Ryu Tries To Start Split
Next Fastball Struggles & Hanley Ramirez’s Future In The Box