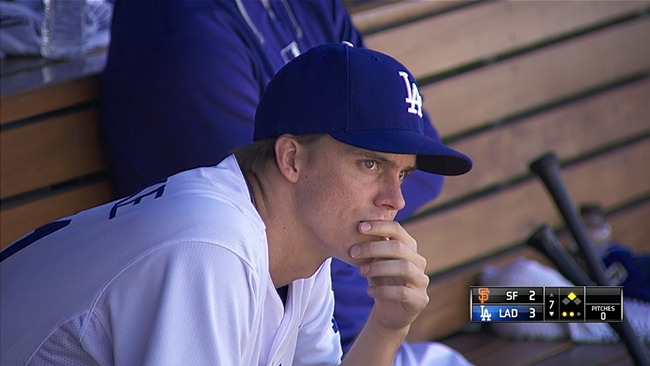 After 103 pitches on Tuesday, Zack Greinke was pitching a dominant start by nearly every measure. He had allowed one run, struck out eleven batters, and hadn’t walked anyone. Batters had seven hits against him, but of the balls that were put into play, ten were on the ground and only one was in the air.

Greinke dominated Reds batters in a different way than usual, too. Here are the pitches which he used to induce swinging strikes: 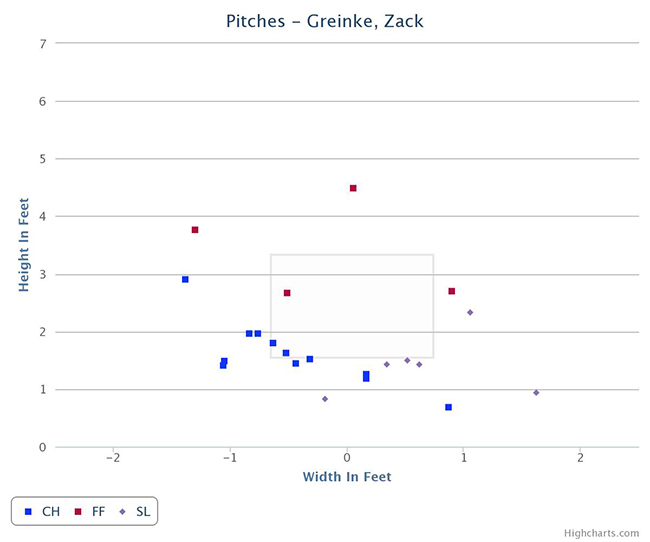 Twelve of the 22 whiffs came on changeups; nine of those whiffs were by left-handed batters. On Tuesday, Greinke threw 29 changes total (25 to left-handed hitters), so twelve whiffs was good for a 41% swing-and-miss rate on the pitch. Before Tuesday’s start, Greinke had thrown 175 changes this year and induced 26 swinging strikes on the pitch, which is a 15% swing-and-miss rate. Greinke’s success with the pitch extended to balls in play as well. Seven changes thrown on Tuesday were put into play – five were ground balls, one was a line drive, and the other was a fly ball.

So, after 103 pitches his start was dominant, nothing more you could possibly ask for. Then he threw his 104th and final pitch of the night to Devin Mesoraco:

His 104th pitch was a two seam fastball. He missed out and over the plate and Mesoraco made him pay, hitting the ball into the left field seats. The home run came with a runner on base, and just like that Greinke had allowed three runs. The three earned runs allowed on Tuesday snapped his streak of consecutive starts allowing two earned runs or fewer at 22 games.

The fact that the streak was broken on one mistake, despite an otherwise brilliant pitching performance, is part of what makes it so impressive. Last year, Kershaw, who finished the season with a 1.83 ERA, allowed three earned runs or higher in a game seven times. He allowed three runs in an inning five times. Adam Wainwright, second place in the Cy Young voting last year, allowed three earned runs or more sixteen times last year. But Tuesday was the first time Greinke did it since July 25th, 2013.

Greinke gave his thoughts on the streak earlier this month:

#Dodgers Zack Greinke on his “streak” of 22 starts allowing 2 ER or less: “They keep changing the wording of it to keep it as a streak.”

In that spirit, let’s modify the “streak”. Greinke has now thrown 23 consecutive starts allowing three runs or fewer. That’s tied for the third longest stretch of all time. The other pitchers with 23 straight starts are Orel Hershiser and a stretch of Pedro Martinez starts which bridged two of the best individual pitching seasons of all time. If Greinke allows three or fewer runs again tonight, he’ll tie Dwight Gooden for second at 24 starts. The record is 26, set by Chris Short in 1967-1968, aided by a higher mound.

Zack Greinke has been worth every penny for the Dodgers since returning from his broken collarbone. With his opt-out coming up after the 2015 season, this pitching season is important for him. The Dodgers might be tempted to extend his contract by a year or two in the offseason to prevent unnecessary heartache and distractions as the opt-out date draws nearer. If he continues pitching like he has over the past year, it’ll be an easy decision for the team to make.

Before today’s game, the team reported many updates on player health. Carl Crawford‘s ankle is progressing well. His ankle injury is bringing stability to the rest of the outfield, though, so it wouldn’t be the end of the world if he takes his time. Chad Billinsgley is getting close to starting another rehab assignment, he could start a week from today and be back as early as July 1st. Scott Elbert is inching closer to a rehab assignment as well, hitting 90mph in a bullpen session last week. Erisbel Arruebarrena, Juan Uribe, and A.J. Ellis all have the flu. It was a bit puzzling why Arruebarrena wasn’t put into the game yesterday when Hanley Ramirez was removed, but now we know why. Speaking of the flu, Joc Pederson returns to the Isotopes lineup after missing two games with the illness.

Daniel Brim grew up in the Los Angeles area but doesn't live there anymore. He still watches the Dodgers and writes about them sometimes.
@danielbrim
Previous 2014 MLB Draft profile: RHP Sean Reid-Foley, Sandalwood HS
Next Pirates 5, Dodgers 3: That Game Happened, I Guess