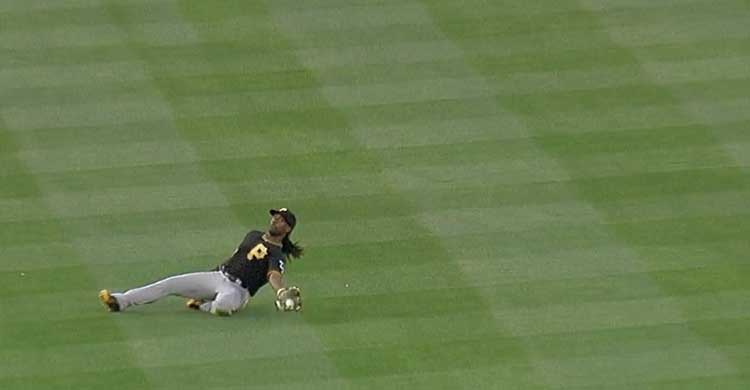 There are some guys on other teams where you can’t help but be impressed by what they can do on the field, even when those abilities are being used to beat your favorite team. Andrew McCutchen, the 2013 NL MVP who battered the Dodgers tonight with a single, double, homer, and the wonderful catch shown above, is absolutely one of those players. When I saw him playing in spring training in Florida a year or two ago, even my wife noted how different the ball sounds coming off his bat. He’s easily one of the best players in baseball, yet he never seems to be thought of as such. I’m not even mad. I’m just impressed.

But then, this isn’t really a Pirates site, is it? So I guess in the sense that the Dodgers just dropped three of four to the terribly disappointing Pirates, including somehow being unable to do any damage against Edinson Volquez, of all people, then yeah, I’m a little mad. Volquez allowed just two runs in five innings, both somehow coming off the bat of Justin Turner, who singled in Matt Kemp in the second and homered in the fourth (plus a ninth-inning walk), and that was about it. Pittsburgh relievers Justin Wilson, Tony Watson, and Jason Grilli each pitched an inning to shut down the Dodgers over the final third of the game, and it probably says a lot that the most excitement Dodger Stadium saw tonight was when word came down that the Kings had won Game 7 of the Western Conference finals.

Yasiel Puig remained unstoppable, of course, collecting a single and a double, but the biggest problem was really that he was never put in a position to do any damage. Puig batted four times, in these situations:

Noticing a trend there? If any player in baseball can make things happen on his own, it’s Puig, but even he can’t overcome Dee Gordon & Andre Ethier going 0-8 ahead of him. (0-9 if you include Gordon’s final plate appearance, which we’ll get to in a second, though Puig didn’t come up after it.) Not that it was just on them, of course; Puig and Turner had two hits apiece, Kemp had one, and that was it. The offense was so barren tonight that the fact that Zack Greinke was merely okay (four runs in six innings) rather than his usual outstanding really didn’t seem to make that much of a difference. (Nor, fortunately, did Chris Perez allowing another homer. He is… not good.)

In the ninth, at least, there was a slight glimmer of hope: After Adrian Gonzalez & Kemp each struck out, Turner & Jamie Romak each walked, bringing Scott Van Slyke up as the tying run with two down. Van Slyke flew to left, but Starling Marte, playing about 900 feet deep in the no-doubles defense, was unable to reach it, allowing Turner to score. Gordon, unfortunately, lined out to short on the very first pitch. He was 0-5 on the day.

The funny thing, though? To read the reactions about this team, you’d think that they were in dead last, a million games out. But in reality, if the season ended today, they’d be in the wild card game. That’s not good enough, of course; being 30-28, two games over .500, is not good enough, not with the talent and money on this team. It is, however, more than good enough to keep them in the race even while half the team is scuffling. Remember, what the Giants do really isn’t relevant right now. It’s just about what the Dodgers do. Right now, they’re not doing enough.