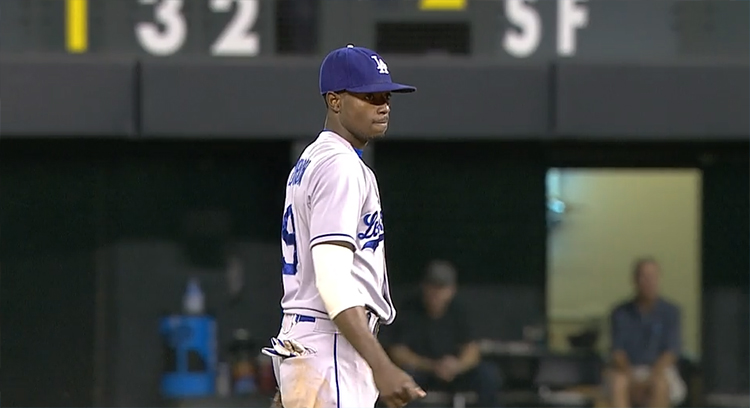 Eddie Butler is one of the best prospects in the Rockies’ system, and tonight was his major league debut. The Dodgers spoiled his party, winning by a score of 7-2.

Butler was very reliant on the fastball, which touched the upper 90s on occasion. However, he appeared to be too dependent on the pitch at times, and the Dodgers made him pay. He only struck out two batters in his 5-1/3 innings of work (his first major league strikeout was Yasiel Puig, a good story to tell his grandkids someday). He gave up three walks, and more importantly, he allowed six runs.

The offense against Butler was propelled by a fantastic night by Dee Gordon, who tripled in the first and fifth innings and singled in the sixth (he added a walk in the eighth inning as well). He even stole his 36th base of the season on a pitchout. He’s been in an extended slump, so tonight’s performance was extremely encouraging.

Dee wasn’t the only bat which woke up tonight. Hanley Ramirez drove in a run on a groundout and singled twice. Drew Butera doubled. Even Hyun-jin Ryu got into the act:

Though he needed to be cooled off by Scott Van Slyke after Gordon drove him in:

It’s a good thing that the offense woke up tonight, too, because Ryu wasn’t particularly sharp. He made it through his first five innings without allowing a run, but it was clear that he just didn’t have anything on his secondary pitches. Coors Field is still the worst sometimes.

Ryu finally allowed a couple of runs in the sixth inning behind a Drew Stubbs home run, a Michael McKenry double, and a Charlie Culberson triple. He got the third out of the inning on a 400ft fly out by Brandon Barnes, and his night was done. Ryu only struck out two batters and walked two, clearly bothered by the thin air impacting his change-up and curve. His fastball command was still decent, and that saved him from a disaster start.

Brandon League, Brian Wilson, and Chris Perez combined for three scoreless innings after Ryu’s departure. All three pitchers struck out at least two batters, though the appearances weren’t without their stressful moments. Even a moderately stressful outing by the bullpen is an improvement on many games so far this year.

Miguel Rojas made his major league debut as Hanley Ramirez was removed from the game in the eighth inning. There wasn’t any obvious trigger for Hanley’s removal, so hopefully it was just for defensive purposes. Rojas dropped a soft line drive on his first big-league defensive chance, running counter to his reputation. Nerves, probably.

An otherwise happy day was blemished somewhat in the top of the seventh inning. Matt Kemp, who has been ice cold of late, connected with a ball and hit it hard to dead-center. Kemp thought he hit the ball out, jogging to first base, and he even high-fived Davey Lopes on his way past. However, the wind was blowing in and the ball hit the top of the wall. Even after the jog, Kemp beat Charlie Blackmon‘s throw to second, but he popped up as the throw arrived and was tagged out as he was in the air. If he had run through to second base, he would have been there standing up.

Kemp has been in the spotlight lately, and fair or not he has to help himself whenever possible. Carl Crawford will be returning soon, and Kemp’s playing time will be hanging in the balance yet again. That particular moment was bad, but at least the fact that he hit a ball 410 feet into the wind is a good sign. He went on to hit a sacrifice fly in the ninth inning.

The Dodgers return to Coors Field tomorrow at 1:00 PM PT. Zack Greinke will look to improve upon his last outing against Jhoulys Chacin.