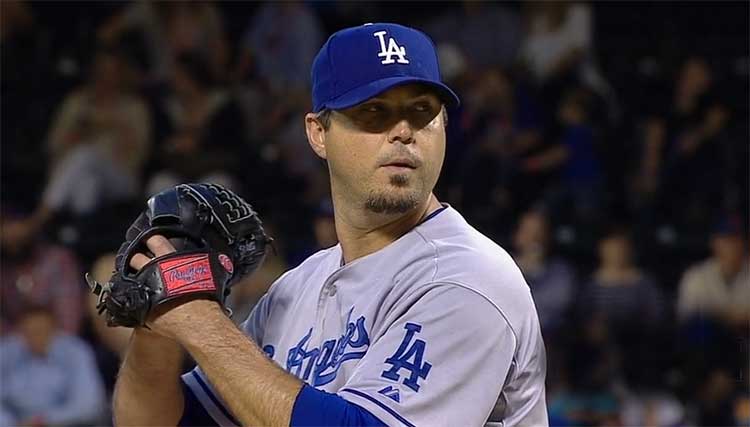 Despite a two hour rain delay, the Dodgers and Reds got in a full game today. The Dodgers won by a score of 6-1 behind another great start by Josh Beckett. Josh only made it through six innings (though he was pulled after just 90 pitches), but he struck out seven batters and walked one, only allowing two hits in the process. He even helped himself with the bat, perfectly executing a “butcher boy” play with a runner on first, which led to a Dodger run later in the inning.

After tonight’s start, Beckett’s ERA is down to 2.35 (though his FIP is still north of four). Interestingly, Beckett threw his curveball less than usual; only 22 tonight, a 24% rate. Tonight’s curveball rate was Beckett’s lowest for a single start since before A.J. Ellis told him to throw the pitch more often at the beginning of the season.

There was a scary moment in the bottom of the fifth inning when a fastball slipped out of Beckett’s hand. The ball hit Zack Cozart on his ear-flap. Cozart stayed in the game. Beckett immediately reacted with concern and apologized after the inning was over, as did most Dodger position players. Sam LeCure hit Andre Ethier in the back later in the game, which may have been retaliation, but nothing came of it.

On the other side of the ball, Mike Leake gave up five runs in 5-1/3 innings. He struck out seven batters and walked only one (he had a 1.02 FIP on the night), but the Dodgers seemed to have all of the hitting luck on their side. Many of the run-scoring hits were softly hit or were very close to defenders. Hanley Ramirez drove in two runs on a single inches away from Brandon Phillips‘ glove. A rally in the sixth was prolonged by Phillips dropping an Andre Ethier ground ball. Ethier was originally ruled out, but was awarded first base after a successful challenge by Don Mattingly. Leake was finally pulled after Justin Turner flared a single about 130 feet into short right field, which drove in Matt Kemp.

Despite the soft hits or hits near defenders with runners in scoring position, the team managed five doubles tonight. Two were off the bat of Adrian Gonzalez, who might finally be breaking out of his month-long slump. Dee Gordon and Andre Ethier each had doubles of their own. Yasiel Puig hit a double as well, though he struck out looking twice for the first time in his career tonight. Puig added a single and stolen base later in the game, which made tonight a productive night on offense. He was limping a bit after the stolen base, so his hip might still be bothering him.

Matt Kemp had a rough night on offense, striking out four times. He’s been great (and not striking out) over the last few days, so there isn’t much to worry about for now.

After Beckett was pulled, the tandem of Paul Maholm and Chris Perez attempted to make the game interesting again in the seventh. The Reds scored a run but ultimately stranded the bases loaded with the tying run on deck. Miss you, Paco Rodriguez. Brian Wilson didn’t fare much better, allowing three baserunners in the eighth inning but escaping without allowing a run. Mercifully, Jamey Wright finished off the game with a quiet ninth inning.

The weather tomorrow is supposed to be just as bad, if not worse, than it was at game time today. Weather permitting, Hyun-jin Ryu is slated to face off against Johnny Cueto. It would be a shame if that match-up is postponed.

Daniel Brim grew up in the Los Angeles area but doesn't live there anymore. He still watches the Dodgers and writes about them sometimes.
@danielbrim
Previous Dodgers @ Reds June 10, 2014: RIP Bob Welch & rain in June?
Next The Right And Wrong Ways To Criticize The 2014 Dodgers