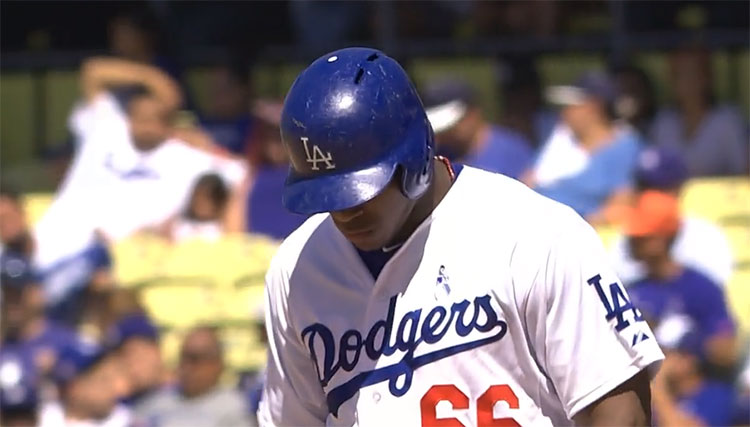 We should probably start, first, by noting that Josh Beckett was actually pretty good once again. Sure, he gave up four runs, but I’m hardly going to get on any pitcher for allowing a Paul Goldschmidt homer at this point, and two of those runs came in when Dee Gordon — who otherwise has looked pretty good defensively of late — made what was a really brutal error in the seventh inning. That’s not to say he was perfect, because one of those runs also scored on his own wild pitch, but otherwise he struck out six and didn’t walk any, pitching into the seventh inning. It didn’t end in a win for his team, for other reasons we’ll get to, but for a guy who we had zero expectations for entering the year, yeah: I’ll take it.

Even Paul Maholm got through a scoreless inning, which shouldn’t be worth noting, but is, because it’s Maholm and that’s a pretty rare sight. But then Chris Perez had to come in, walk Goldschmidt — which is probably the best possible outcome there, all things considered — get to 0-2 on Miguel Montero… and allow the Arizona catcher to take him deep to center field, scoring two and putting the game all but out of reach.

And why was that? Because somehow, Bronson Arroyo (!), Oliver Perez (!!), Evan Marshall (?), Brad Ziegler, and Addison Reed managed to hold the Dodgers to all of three runs, despite putting 16 runners on. Not that they didn’t have chances, of course; only once, in the third inning, did the Dodgers go 1-2-3. But baserunning mistakes — Yasiel Puig caught stealing to end the first, Drew Butera thrown out at third to hurt a rally in the seventh — and the failure to capitalize on those opportunities really did them in today.

It should be noted, also, that both the stars and the scrubs take the blame there. In the seventh, after Jamie Romak came in to score the second Dodger run, Hanley Ramirez came up with one out and two on. He struck out, then Marshall induced a weak grounder from Puig.

In the eighth, after the Dodgers put men at the corners with one out, Romak grounded into a double play, and it says a lot about the state of this team that a career minor leaguer like Romak was even up in that situation. The problem, as it’s been for a while, is that Don Mattingly never has a full deck of cards to play with. The red-hot Justin Turner, who hasn’t started the last two days because of a calf injury, pinch-hit in the seventh for Beckett and doubled. But, presumably because of his leg, Carlos Triunfel immediately came in to run for him, then had to exit himself when Maholm entered. That meant that even if Mattingly wanted to use Andre Ethier to hit for Romak against the righty Ziegler, it would have forced him to put Miguel Rojas into the game at third and have lost every non-A.J. Ellis position player on his bench before the ninth inning.

You might have done that — I don’t think I would have — but just about no manager would. As we talked about prior to the game, there’s something extremely fishy about the fact that Ethier wasn’t starting in the first place, though we did see him hit in the bottom of the ninth. He singled to right field. I still don’t understand.

Mike writes about lots of baseball in lots of places, and right now that place is MLB.com.
@mike_petriello
Previous D’Backs @ Dodgers June 15, 2014: Andre Ethier Sits Against A Righty, Which Is Weird
Next What’s The Upside Of Keeping Chris Perez?