As the Dodgers prepared for the second game of their series against the Rockies, they passed on some bad news. Carl Crawford‘s sprained ankle might be worse than the team initially suggested. Given their track record on injuries, is it really a surprise? J.P. Hoornstra reported that Carl Crawford left his rehab at Camelback Ranch and flew to Los Angeles to visit Dr. Neal ElAttrache, where he had an MRI. We had previously heard that Crawford’s rehab had stalled, and a visit to Dr. ElAttrache does not sound like a good sign. Memories of Matt Kemp playing on a nearly-broken ankle last year are still vivid, so it’s hard to be optimistic about Crawford’s chances of returning soon. Crawford plays where the Dodgers have great depth, so his absence will not hurt the team very much, but it’s still easy to feel empathetic for him.

Meanwhile, the Dodgers will try to follow up last night’s decisive victory against Jhoulys Chacin. Chacin and Dodger starter Zack Greinke faced off in Colorado a week and a half ago. The Dodgers eventually lost the game in the tenth inning on a Brandon Barnes walk-off triple. Greinke and Chacin were somewhat evenly matched, each giving up three earned runs. Greinke gave up an unearned run as well, but he pitched one more inning than Chacin. He also walked fewer batters (1) than Chacin (3) and struck out two more.

After Greinke’s incredible runs allowed streak was snapped, he has been on a tiny bit of a slide. He gave up four runs against the Rockies and against the Pirates in the start before that. He gave up two runs in his most recent start against the Reds, but only managed to strike out three batters in six innings pitched.

In the last several games, Greinke’s pitching approach has changed as well: 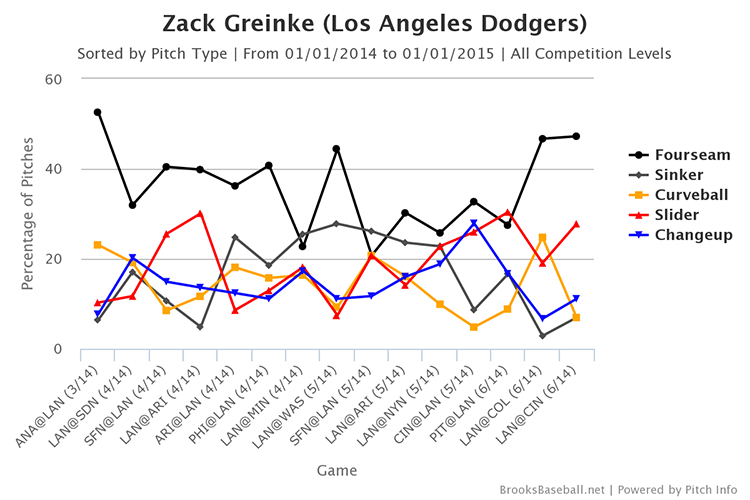 There wasn’t much unusual about his pitch distribution in the start against the Pirates. In the next start against the Rockies, he dramatically increased usage of his curveball, which is a bit odd since Coors Field tends to have a negative impact on the pitch. His fastball usage also increased dramatically as his sinker, change, and slider all dipped. In Greinke’s last start against the Reds, the curveball use dropped significantly. His other secondary pitch usage increased, as did his fastball usage which remained high for the second start in a row. It’s way too early for these changes to actually mean anything, but it’s something to watch for tonight.

In more fun news, Dee Gordon‘s triple/error time around the bases was the fastest recorded in the majors since Tater Trot Tracker began keeping data in 2010. He circled the bases in 13.89 seconds. Billy Hamilton was .09 second faster on an inside-the-park home run hit in AA, so Dee still has something to shoot for.

Daniel Brim grew up in the Los Angeles area but doesn't live there anymore. He still watches the Dodgers and writes about them sometimes.
@danielbrim
Previous Dodgers 6, Rockies 1: Hits, Hits Everywhere
Next Dodgers 4, Rockies 2: Hanley homers, as does his replacement