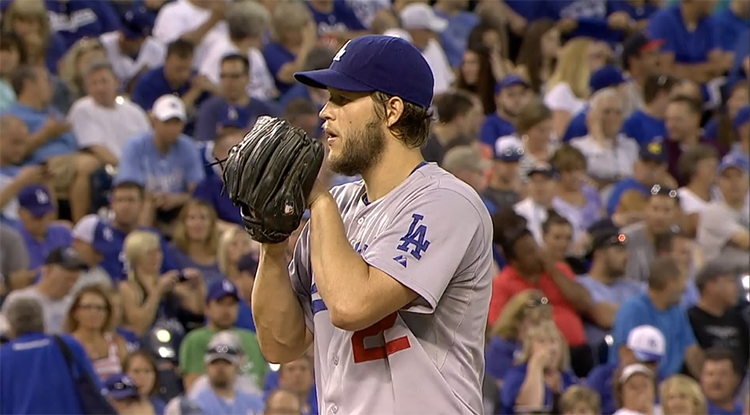 Clayton Kershaw didn’t allow ruminations of Johnny Vander Meer to last very long tonight. The second batter of the game, Eric Hosmer, somehow singled to left on a fastball that was about shoulder-high. Despite the Royals getting a whole six hits against him, Kershaw pitched eight shutout innings. Kershaw has now thrown 21 consecutive innings without allowing a run; his ERA now down to 2.24. Kershaw walked one batter to go along with his eight strikeouts, which actually decreased his 2014 K/BB ratio. Sixteen of his outs were on balls in play, fourteen of which were on grounders. Oh, and all of this came without great command of his curveball.

The biggest trouble Kershaw faced was in the bottom of the seventh, after Omar Infante hit a grounder up the middle and Danny Valencia lined a single to left with one out. However, Justin Maxwell (who, remember, was rumored to be nearly traded for Dee Gordon during the winter meetings last year) hit into a fielder’s choice. Miguel Rojas made a great play on an Alcides Escobar grounder up the middle to end the threat and preserve the shutout.

On the other side of the ball, Danny Duffy stymied the Dodgers’ “house money” lineup, as we all probably predicted. Relying very heavily on his fastball, Duffy made it through six innings and allowed just one run. He struck out five batters and walked four. The only run scored in the first inning on an Adrian Gonzalez fielder’s choice, which would have been an inning-ending double play if the ball had not tipped off of Duffy’s glove. Justin Turner (Miller?) scored after leading off the inning with a triple at the end of an 11 pitch at-bat. Turner saw 22 of Duffy’s 105 pitches tonight.

The Dodgers didn’t score again until the ninth inning against Kelvin Herrera. After a lead-off walk by Adrian Gonzalez, A.J. Ellis and Andre Ethier singled softly to add on an extra run. Kenley Jansen didn’t need it, though, as he struck out two batters in a 1-2-3 ninth inning.

The Dodgers’ win sets up a rubber match between Dan Haren and James Shields at 5:10PM tomorrow evening. It’s a bit of a mismatch on paper, but Shields hasn’t been his normal self so far this year either.

Daniel Brim grew up in the Los Angeles area but doesn't live there anymore. He still watches the Dodgers and writes about them sometimes.
@danielbrim
Previous Dodgers @ Royals June 24, 2014: Just Another Hanley Ramirez Injury Issue
Next With his ear saved, Alex Guerrero set to return, but will he be in form?