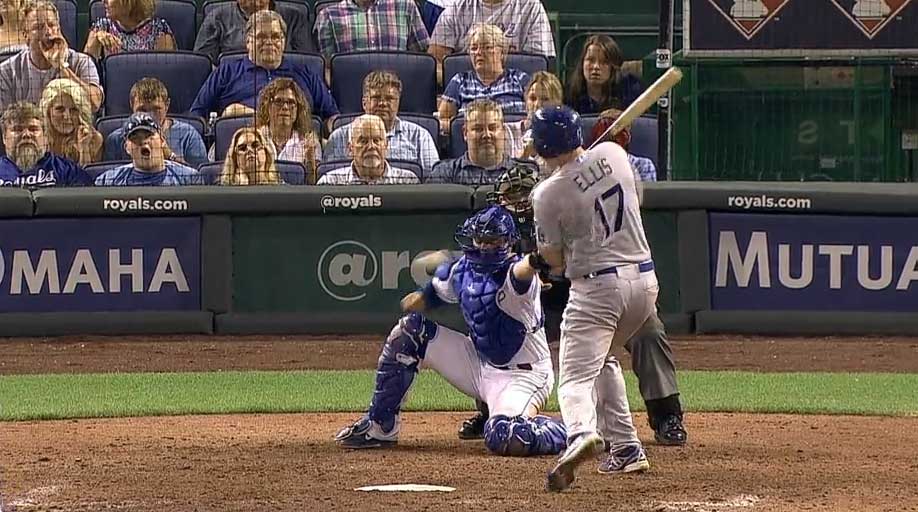 I wouldn’t normally put an image of A.J. Ellis getting plunked as the lead image here — sorry, A.J.! — but then, it’s not normal that the winning run scores on a bases-loaded hit by pitch. So yeah, take that, Wade Davis, and your otherwise spotless season.

So, listen, I’m going to be straight with you. You don’t come here to read a paint-by-numbers game recap. You can go to MLB.com or the Los Angeles Times or any number of other places for that. You come here, I hope, for honesty, straight talk, and perhaps a bit of a non-traditional way of looking at things. And usually, I like to think that we can provide that for you. However, in the spirit of that honesty, I should probably admit that I wasn’t able to turn this game on until the eighth inning, when it was already a 4-4 tie, and the very first pitch I saw was Ellis getting hit to force in a run. So I won’t pretend to give you some in-depth analysis of play that I didn’t see, except to give you these observations from the box score:

— Dan Haren‘s home run problem has moved from “a problem” to a problem, especially when it’s Lorenzo Cain & Jarrod Dyson
— I can say that Dee Gordon isn’t hitting like he was in April, which is true, but four-hit games with a stolen base (even when they come with a stolen base and an error) are going to keep him in the lineup all season long
— We should probably not ignore that Jamey Wright threw 2.2 scoreless innings, which was a game-saver
— Matt Kemp, home run, and again, just leave him alone and let him play
— Yasiel Puig doubled and tripled, which at least gives me hope that maybe his hip won’t be the death of him

So that gets us to the eighth inning, where Ellis drove in a run with his arm, and that left it up to the perhaps unlikely trio of J.P. Howell, Brandon League, and Brian Wilson — because Kenley Jansen had appeared in four of the last five games — to finish it off. And… it worked. Well, even. Howell struck out Alex Gordon and walked Omar Infante, which ended his night, and it’s probably here that I should point out that although I really like Howell and everything he’s done, the All-Star campaign that appears to be popping up around him is straight lunacy.

I can’t really explain why Don Mattingly thought it would be a good idea to bring in League against Salvador Perez, but he did it anyway. Somehow, League whiffed Perez and managed to get Alcides Escobar to ground out, so good on him. That brought on Wilson for the ninth, and if you were terrified by that, you’re not wrong in the least. But, Wilson struck out Dyson, then allowed a Danny Valencia single, before getting his bacon completely saved by Scott Van Slyke:

That’s enough of Kansas City for the next nine years, I think. Back home to face St. Louis tomorrow.

Mike writes about lots of baseball in lots of places, and right now that place is MLB.com.
@mike_petriello
Previous Dodgers @ Royals June 25, 2014: So Clint Robinson Is Here For Some Reason
Next Dan Haren’s Collapsing 2014 Dream Season