Mailbag! Remember, questions come in to the form at the right, or just email thedodgersdigest at gmail.com.

Charles: “They have not worn the script Los Angeles jerseys on the road for a while, are these the alt jerseys now?”

Great question! I love uniform minutiae. One of the many great, wonderful and terrifying things about the internet is the always useful SportsLogos.net, because in addition to having a database of every logo, uniform and shoulder patch you can imagine, they actually keep a daily track of MLB uniforms worn and their records in them. For the Dodgers, that breaks down like this:

As far as not having worn the Los Angeles jerseys, that’s only partially true. They did wear the “Dodgers” uni in all three games in Kansas City and two of the three games in San Diego, but it’s been nearly 50/50 so far, with the “Los Angeles” jersey having seen action in only one more game. I suppose that defeats the purpose of one being an “alternate,” if it’s now just two road jerseys used nearly equally. That said, I stand by my original statement at the time that these are totally pointless, because you can’t tell the difference. I absolutely couldn’t have told you if it was going to be a 50/50 split or a 90/10 split before I went and looked it up. I doubt most people have even noticed.

Daniel: “Don’t you think that not re-signing Hanley is the right thing to do? Too much money for too much health problems, and the team has a shortstop (yeah I know, a bad offensive shortstop) in Erisbel Arruebarrena, signed through 2018.”

What to do with Hanley Ramirez has been a hot topic around here lately, and the fact that he’s dealing with yet another injury certainly isn’t helping. I didn’t want to give him a long-term contract a year ago, and I still don’t now.

That said, he’s still a valuable bat. No, he’s not hitting like he did in 2013, but that never, ever should have been expected. What he is doing is hitting slightly better than his career averages, and it’s hard to find that kind of production on the left side of the infield. Among qualified shortstops, only Troy Tulowitzki has been more productive at the plate. Among third basemen, only Todd Frazier (?!) has been better. That’s not the kind of bat you simply discard, in my mind. Now, where you play him and who plays the other spot is the bigger question.

Ideally, he’s playing third base, but we can’t count on Arruebarrena being ready to be a big league hitter next year, you still have Juan Uribe signed, and the shortstop free agent pool is basically Stephen Drew, Asdrubal Cabrera, and J.J. Hardy, all flawed players. Maybe that means you put up with Ramirez for one more year at short until Corey Seager is ready… I really don’t know. But I do know that I share your frustration, even though I consider Ramirez too valuable to let walk unless some other team really is going to give him five or six years. 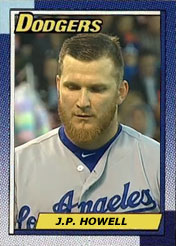 Eric: “Considering the ‘importance’ of home field advantage in the WS and the need for experienced pitchers out of the pen in the All-Star Game, what are the chances that J.P. Howell makes the NL All-Star team? (0.1%)”

I absolutely cannot see this happening. Don’t get me wrong, of course; as Dustin said the other day, Howell has been a life-saver, even if he’s doing it in a very weird way. (He’s striking out more than ever, but he’s also walking more than ever, but has yet to allow a homer.)

That said, the idea of him making the All-Star team seems incredibly unlikely. First of all, remember that the Dodgers will definitely have Yasiel Puig on the team, and very possibly three or four more from a group of Ramirez, Dee Gordon, Clayton Kershaw, and Zack Greinke. Since every team needs at least one representative, it’s very difficult to think the Dodgers are going to have six or seven players. Second, think about the other relievers in the NL, and remember that an All-Star team probably has something like four-to-six relievers on it. Craig Kimbrel and Aroldis Chapman are no-brainers. Huston Street isn’t as good as his 0.96 ERA indicates, but it’s shiny, and he might need to be the token Padre, unless you think Seth Smith is getting on. Miami’s Steve Cishek has been outstanding, to the point that he’s been basically as dominant as Kimbrel. Even if we’re just looking at setup men, Tony Watson and Joaquin Benoit have cases just as good or better than Howell’s.

The point here isn’t to say that Howell hasn’t been good, because he most definitely has. It’s just a tough numbers game, and it’s exceptionally difficult for a non-closing reliever from a team with plenty of other representatives to make it on. I just can’t see it.

Jennifer: “I understand OPS+ but wRC has me scratching my head. What are the substantive differences? Particularly from a Dodger fan point of view.”

wRC+, or “Weighted Runs Created Plus,” is a FanGraphs creation that purports to be the ultimate offensive stat. (And does it quite well, I might add.) While OPS is better than batting average, it has a few problems. First, you really shouldn’t add OBP and SLG, because they aren’t on the same scale. (OBP goes to 1.000, SLG 4.000.) Second, it makes the two of equal value, which isn’t true; one point of OBP is better than one point of SLG. Third, it’s not weighted or adjusted at all — it makes no distinction between 1999 Coors Field or 2014 Petco Park, which is a huge issue, and it doesn’t include any kind of baserunning input.

For a Dodger example, consider this. In 1968, long considered “the Year of the Pitcher” for how difficult it was to generate offense, Dodger catcher Tom Haller hit .285/.345/.388 with four homers and negative value on the bases. (He stole once, but was caught four times.) In 2009, Matt Kemp hit .297/.352/.490 with 29 homers and 34 steals. As difficult as it is to believe, they had identical 123 wRC+, simply because the difference in run-scoring environments was so severe.

Mike writes about lots of baseball in lots of places, and right now that place is MLB.com.
@mike_petriello
Previous Cardinals 3, Dodgers 1: Missed Opportunities
Next Cardinals @ Dodgers June 28, 2014: Hanley Ramirez Is Back