If you know me,  you know that I don’t really put much stock into All-Star teams. Between fan voting, ballot box stuffing, over-importance placed on guys off to unsustainable hot starts (hi, Charlie Blackmon!), and the “every team must be represented” rule, it’s more of a fun diversion than an actual accounting of the best players in baseball. I don’t blame fans for wanting to see Derek Jeter get one more sendoff, but no one is pretending he’s actually the best choice to represent the American League at shortstop. Usually, I ignore the process entirely and don’t post about it at all.

If that Dee Gordon had merely been able to make it as a bench player or be worth a mild trade return or had any kind of career other than Quad-A, I think we’ve have considered it a success. He was a lost cause; he couldn’t hit, he couldn’t play shortstop, it was uncertain whether he could play second, and having speed alone wasn’t enough. When he got off to a hot start in April — 143 wRC+ — we appreciated it, but knew that with a .385 BABIP he couldn’t keep it up. He didn’t, regressing to an 80 wRC+ in May, but then came right back in June, putting up a 136 mark that was even more impressive because it came with a BABIP 40 points lower. 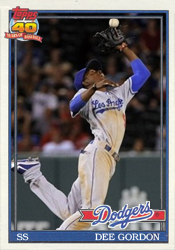 Gordon has cut his strikeout percentage by five points. He’s doubled his ISO. The added muscle he put on over the winter has clearly been helpful; his improved contact rate — particularly in the zone — has been a big part of it too, even if he hasn’t been walking more. On defense, it hasn’t always been smooth sailing, but he’s clearly been unquestionably better than he has been at shortstop, with the potential for more improvement as he gains experience at the position. He has 42 steals; he’s been caught only nine times. He is, at the moment, the most valuable second baseman in the National League.

I’m floored, really. Anyone who said they saw this coming — yes, you — is lying. There was no conceivable way to see a breakout like this. I’m not sure that a half-season is enough for me to fully believe, but it’s damn close. He’s been fantastic, to the point that Alex Guerrero might be a multi-positional reserve if and when he returns. Whether or not Gordon is a true-talent 5 WAR player going forward, which I’ll take the under on, is barely relevant. What he’s done to date matters, and it’s been outstanding, even if I wouldn’t mind entertaining the thought of selling high this winter.

Gordon isn’t just a solid player. He’s an All-Star. I’m not sure I’ve ever typed less likely words. Yasiel Puig, Clayton Kershaw and Zack Greinke all made the team, too, by the way, to the surprise of no one. I’m sure they’ll take no offense that the focus here is on Gordon. What a story.