Between all of the Derek Jeter hype, the purposefully bad pitches, and the completely inexcusable lack of a tribute to Tony Gwynn, there were some Dodgers in the All-Star Game tonight. Yasiel Puig, Clayton Kershaw, Zack Greinke, and Dee Gordon – four of the players who will be most responsible for trying to push the team back into the playoffs – played at Target Field. The pitching was outstanding, Gordon had a great moment, but it wasn’t all bright for the Dodgers.

Yasiel Puig concluded a difficult week, his struggles continuing from last night. With Andrew McCutchen on base in front of him, he struck out against a Felix Hernandez change-up in the first inning. He wasn’t the first batter to do that, and he certainly will not be the last. (On the subject of Felix – and this is not Dodger-related – go watch this GIF of his fastball and change over and over again. See why Puig struck out on that pitch now?). In the third inning, Yu Darvish got him looking with a borderline slider. He struck out again in the fifth against a Max Scherzer slider, his third strikeout of the night. Puig only had one real defensive change; a Mike Trout triple which flew over his head. It was a make-able play with a better route, but it’s hard to blame Puig for being a bit shy of the wall in an exhibition game. 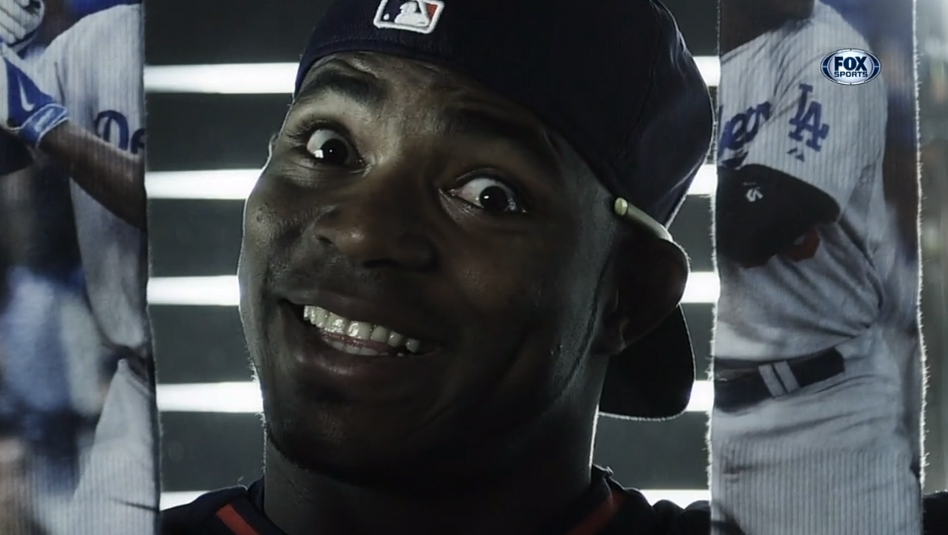 Thanks for that, FOX. Puig told Bill Shaikin that he “Came [to Minnesota] to have fun,” so it’s hard to criticize his performance very much.

Fortunately, the other Dodgers performed better. After Adam Wainwright gave up three runs in first inning, Clayton Kershaw entered the game to face the bottom of the American League order in the second. The highlight was this swinging strikeout by Josh Donaldson:

He induced two soft outs to third base off the bats of Adam Jones and Salvador Perez to complete a scoreless inning. Kershaw has made four all-star appearances and has not allowed a run.

Zack Greinke pitched the fourth inning and did even better than Kershaw. Jose Bautista grounded out to third base, then Greinke did this to back-to-back Orioles:

The Orioles are in first place, so this is theoretically a potential World Series Preivew. The batter in the GIF is Nelson Cruz, who is currently second in the majors with 28 home runs. Greinke struck out Adam Jones on a nearly identical pitch to end the inning.

Chase Utley started the game at second base for the National League, but after a two-out single against Chris Sale in the fourth inning, All-Star Dee Gordon (that has a ring to it) was brought in to pinch run. Sale is left-handed and does a really good job controlling the running game (batters have only made four stolen base attempts against him this year and are two-for-four), and Gordon couldn’t quite get a read on him. However, Jonathan Lucroy hit a ball to the gap in right-center and Dee was off to the races:

He was clearly excited to score, which was a fun moment. Gordon went to ground to second in his only plate appearance, and was only out because of an outstanding play by Jose Altuve.

Gordon returned the favor with this play off the bat of Michael Brantley, with the assist from Freddie Freamon:

Even though the National League lost, and therefore the Dodgers could lose a game at home in the World Series, it was fun to see some of the people we root for every day on the big stage. Typing out the names in this post, both Dodger and non-Dodger, still highlights the fun parts of the game after sorting through the layers of nonsense. It’s pretty silly that the game decides home field advantage, but overall, Puig had the right idea. The Dodgers looked like they had fun, nobody got hurt (or, at least, no Dodgers), and they’ll get a couple days of rest before the short flight to St Louis. Overall, it’s hard to view it as anything other than a success for the Dodger players.

Daniel Brim grew up in the Los Angeles area but doesn't live there anymore. He still watches the Dodgers and writes about them sometimes.
@danielbrim
Previous The 2014 All-Star Game: Imminent Jeterpocalypse
Next Using The Red Sox To Break Up The Outfield Problem