Should The Dodgers Trade For Jonathan Papelbon?

Ah, trade season. This tweet doesn’t mean that the Dodgers are actually going to pursue Jonathan Papelbon. The “baseball source” appears to be speculating. Given the Dodgers’ tendencies, it’s not surprising, because:

The pieces, as flimsy as they are, fit together. Saxon backed off of the speculation last night, but that doesn’t mean that the pieces don’t fit together anymore. Papelbon is a polarizing character, but he’s worth looking into further. Even if the Dodgers aren’t interested in Papelbon now, should they be?

Is he still good?

Let’s look past the contract for a minute. It’s the elephant in the room, but it distracts from assessing how much his actual presence will help or hurt the team. A glance at his 2014 numbers shows that he’s currently pitching really well. If you’ve read Dodgers Digest long enough, you know our feelings on reliever ERA, so you know to look past his shiny value of 1.25. But when you do, you find a 2.33 FIP. After adjusting for park, Papelbon’s 62 FIP- would be second among Dodger relievers, only behind Kenley Jansen. It’s the 21st best FIP- among relievers in baseball.

Papelbon has been famously losing speed on his fastball for a few years, as shown below: 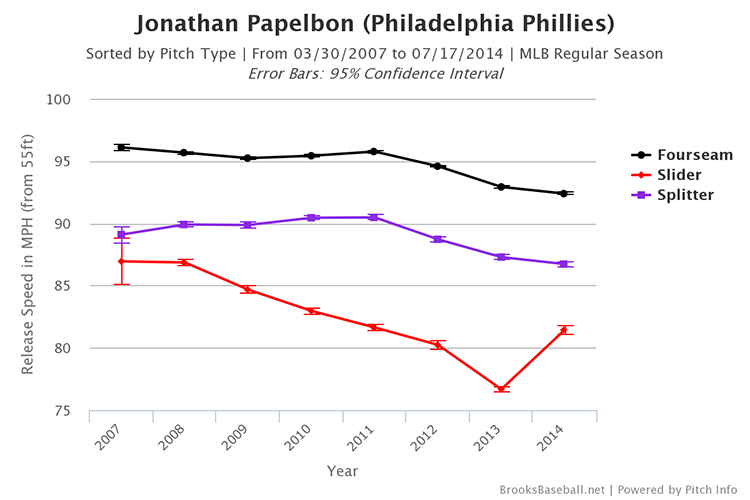 In 2011, Papelbon’s fastball velocity averaged 95.7 MPH. This year, it’s 92.4 MPH. Papelbon is 33 years old and it is showing. That velocity loss would normally indicate a huge drop in performance, but according to Papelbon’s 2014 numbers that hasn’t actually happened this year.

There’s another pitch to address on that chart, though, and that’s Papelbon’s slider, which is almost 5MPH faster this year than it was last season. The pitch is breaking less as a result, but the results have improved regardless. In 2013, batters had a 33.3% whiff/swing rate against Papelbon’s slider. This year, that number has jumped to 42.9%. The league-average whiff/swing rate for relievers with at least 50 sliders is 37.3%. By swing-and-miss numbers, Papelbon’s slider is well above average. Fangraphs’ pitch values agree, grading the pitch as his best for one of the first times of his career. He is responding by throwing the pitch more than ever, up to about 15% usage this season. He uses it almost entirely against right-handed batting, but it has become a useful weapon for him.

Despite the elite FIP and the improving slider, Papelbon’s numbers still have warning signs. He has only struck out 7.96 batters per nine innings this season, the lowest rate of his career. The K/9 rate is slightly depressed by his low BABIP; his 22.9% strikeout rate is actually slightly higher than last year, but not by a lot.

Papelbon’s FIP is elite even with a low strikeout rate because he has not allowed a home run so far this year. As a result, Papelbon’s xFIP, which normalizes his HR/FB to the league-average level, is 3.90. After adjusting for park, that’s about 5% worse than an average pitcher. Suddenly, he doesn’t seem quite as palatable.

In order to know what that distance actually means, it has to be converted to an expected HR/FB ratio. The Hardball Times has a really good hitting correlation tool which has fly ball distance and HR/FB as available input variables. The correlation between the two variables is about 0.8 (R^2=0.614), which is pretty strong. The causation is there too; giving up long fly balls means that a pitcher is going to give up more home runs. This means that the fit equation can be used as a reasonable way to convert fly ball distance into an “expected” HR/FB ratio.

Using this method for Papelbon results in an expected HR/FB ratio of 4.4%, well below the league-average rate. Papelbon has allowed 46 fly balls this season, which means he would be “expected” to allow 2.04 home runs given his fly ball distance so far this year. When using 2.04 home runs in the FIP equation, it yields a modified expected FIP of 3.04, which is still about 20% better than a league-average pitcher. The result is also reasonably close to Papelbon’s 3.18 SIERA. These numbers are good, but not elite like Papelbon’s current FIP suggests.

So, we have established that Papelbon is still pretty good. He’s not amazing, but right now the threshold for an improved bullpen is being better than Chris Perez. Scott Elbert‘s return might make change the threshold to being better than Paul Maholm or Jamey Wright, and Papelbon still meets that criteria. If the question is solely “will he make the current team better?” the answer is an absolute “yes.”

The contract and value

Papelbon will improve the bullpen, which brings us to the reasonable trade criteria, assuming that he wouldn’t be added to a package for Cole Hamels or something similar. This is where we have to come back to Papelbon’s contract. There is almost no scenario in which Papelbon will be worth what is owed to him. As a result, his trade value is heavily dependent on how much salary the Phillies are willing to contribute.

If the Dodgers take on Papelbon’s entire salary, he could probably be acquired for next to nothing. An August waiver claim wouldn’t be out of the question if something doesn’t get done before July 31st. If the Dodgers do give up anything, the package would be a minor leaguer or two with low upsides.

A bullpen upgrade, and all it costs is money and guys we won’t miss? This is starting to sound pretty good. However, the Dodgers’ previous habits need to be remembered. If they take the full contract and Papelbon stinks, it’ll be nearly impossible to get rid of him. We’ve seen that pattern over and over again with relievers and this front office. Papelbon’s contract has a higher annual value than any of the problem reliever contracts the Dodgers have signed. This is a team which has hung on to Chris Perez, whose remaining salary is 95% lower than Papelbon’s, until the middle of July. Additionally, the Dodgers do not have an unlimited budget, so there’s a potential impact on signing players next season.

If the Phillies want to eat a portion of Papelbon’s salary to improve their return, which seems plausible, that might create a sticking point for the Dodgers. They still have capable relievers in Paco Rodriguez (who is back up with the team, but is only around because Maholm is in the rotation now) or Yimi Garcia in the minors, so giving up any significant prospect value for even a reduced-cost Papelbon doesn’t make much sense. If it’s beyond the equivalent of, say, Lindsey Caughel and Matt Magill, they should look internally instead. I don’t think think that’s what the Phillies would have in mind. The internal options might not be as good, but there is still a point where it’s better to give the kids a shot. There is a significant amount of addition-by-subtraction with whatever move the Dodgers make.

Will the Phillies take Ethier or Crawford?

In theory, a bad contract swap here might make sense. The Dodgers want to get rid of Carl Crawford or (more likely) Andre Ethier. Jonathan Papelbon’s contract isn’t exactly great, either. What is going on with the Phillies’ outfield situation? They have Ben Revere for two more seasons in center, which neither Dodger outfielder can play. Domonic Brown has been an absolute disaster in left field this season, only managing a 66 wRC+ with bad defense on top of it. In right, Marlon Byrd has managed a decent year, but he is likely to be traded before the deadline. Darin Ruf isn’t a long-term solution, either.

This is making more and more sense, until you take what the Phillies should be doing into consideration. They’re a team which won’t realistically contend without some major changes, and adding an aging outfielder isn’t going to do it. Brown is still relatively young and very cheap, so it makes sense to give him some time to work out his issues. Their outfield prospect situation isn’t great, but Kelly Dugan is relatively close to major-league ready. He isn’t flashy (missed BA’s pre-season org. top 10 but was fourth on BP’s org. top 10), but he is probably a good enough fill-in for now.

Ruben Amaro is always a bit of a wild-card, and Ethier or Crawford would be an upgrade. The Dodgers would still need to eat contract money and throw the Phillies a mid-tier prospect, but it’s possible. It’s just not probable.

What about the chemistry?

Last year, during the campaign to get Yasiel Puig into the all-star game, somebody asked for Papelbon’s thoughts on the situation for some reason. His comments made news:

“To me, it’s an absolute joke. It’s really kind of stupid if you ask me,”Papelbon said on MLB Network Radio, as he had trouble even saying Puig’s name correctly. “The guy’s got a month, I don’t even think he’s got a month in the big leagues, and just comparing him to this and that, and saying he’s going to make the all-star team, that’s a joke to me.”

It was a misguided thing to say, but it probably doesn’t actually matter in the long-run. Puig and the rest of the Dodgers probably don’t even remember the comments to begin with. Even so, Papelbon’s reputation as a clubhouse presence isn’t exactly spotless. Bill Baer has a good article at Crashburn Alley on the subject, written before the start of this season.

The Phillies are 196-223 since Papelbon began his tenure with them in 2012. The losses probably have more of an impact on chemistry than anything Papelbon did or did not do. As long as the Dodgers keep winning, it’ll probably be fine.

Overall, Jonathan Papelbon might not be the worst trade target out there to improve the bullpen. The money is the biggest issue, as you’d expect. He isn’t worth what he’s owed, but he’s still a good pitcher and would slot into the late innings better than the current iteration of Brian Wilson. A bad contract swap isn’t out of the question, but it isn’t likely either. He’s a player who fits most of Ned Colletti’s desired qualities for a reliever, but given his abilities that might not actually be a bad thing.

Daniel Brim grew up in the Los Angeles area but doesn't live there anymore. He still watches the Dodgers and writes about them sometimes.
@danielbrim
Previous Dodgers’ prospect scouting report July 2014: Corey Seager
Next Second Half Issue: Dan Haren Wants That Vesting Option