In a recent article at Baseball Prospectus, the fellas there wrote about the 2012 redraft — basically, it’s the draft in hindsight. Corey Seager ended up going No. 10 to the Colorado Rockies. I’m thinking that might have been too low, and others in the baseball world would probably agree (but the 2012 draft was deep).

Seager is not only a budding star in the prospect world, he’s also a pretty safe prospect — something that is hard to say about a kid who hasn’t played one game at Double-A yet (that happens later today).

Seager was the Dodgers’ first-round draft pick in the 2012 MLB Draft (No. 18 overall) out of Northwest Cabarrus High School in North Carolina. He signed for $2.35 million, which was $40,000 more than the slot-recommended amount.

He made his debut with the Ogden Raptors of the Pioneer League in 2012, and hit .309/.383/.520 in 46 games. He went to Great Lakes Loons of the Midwest League in 2013 and, despite a slow start, finished his time in Midland with a .309/.389/.529. That earned him a late-season promotion to Rancho Cucamonga, where he faltered (mostly due to fatigue): .160/.246/.320. He ripped through the California League this season, earning spots on the Cal League All-Star team and the Futures Game. He was just promoted to Double-A Chattanooga and should make his Southern League debut today.

Seager is a big, strong left-handed hitter with a smooth stroke. He isn’t a rotational hitter, but that doesn’t prevent him from hitting the ball hard, consistently. He’s able to generate plus-bat speed with his strong wrists and forearms he uses to throw his hands at the ball. That helps him to hit the ball the opposite way with authority. He also is able to turn on the inside pitch and hit it a long way. But the inside pitch will also give him trouble at times — something not uncommon for tall hitters. His stance is slightly open (emphasis on “slightly”), and he’s pretty quiet when waiting for the pitch. His hands are in the same position from the start of his swing until he brings them through the strike zone. His bat stays in the zone for a long time and is able to barrel up pitches well. He has natural loft to his swing and is able to generate backspin to hit balls over the fence.

He has a really wide base and his follow-through sometimes looks like he’s off balance. He’s done some work on it recently to clean it up, something he’d need to do anyway as he moves up the minor-league ladder. He has the best hit tool and power potential in the system. He also has good plate discipline, even if he isn’t walking as much this season as he was last season (because he’s hitting well). His ceiling is a middle-of-the-order guy who can hit .300/.400/.500 with 25-30 home runs and a lot of doubles.

If you need visual proof he’s adept to hitting the ball all over the field, here you go: 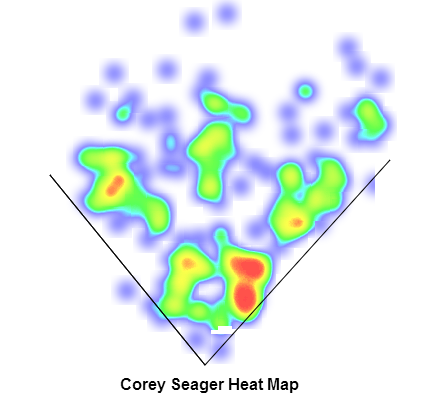 Defensively is where the biggest questions lie with Seager. I’ve gone back and forth on this. I’ve seen him a handful of times in person and have come away impressed and disappointed in his defensive performance. But after consideration and listening to the comments and reports of folks smarter than I, Seager can remain at shortstop for at least the first few years of his career.

If the Dodgers retain Hanley Ramirez for a few years, then it’s a lock that Seager will begin his big league career at shortstop. He has the hands and arm for the position. His instincts are not bad, but his range is what will determine how long he sticks at shortstop. Seager will vacuum up most balls hit his way, but when he has to move, that’s when he gets exposed a little bit. But for a guy his size, he has decent enough range to at least be considered a shortstop. He won’t make Andelton Simmons-esque plays, but he might earn a web gem every once in awhile. His arm is definitely the best part of his defensive profile. If/when he moves over to third base, it shouldn’t be a tough transition. He could be a plus-defender at third.

He has a little more speed than some might think, but he isn’t anything more than a fringe-average runner (on a good day). He might swipe a handful of bags per year, but he won’t be a big stolen base guy. His instincts on the basepaths make him a better overall baserunner, despite lacking average speed.

Here are some videos I’ve shot of Seager at the plate.

Seager is the best and most highly regarded position player prospect the Dodgers have, and the best since Adrian Beltre. He has the bat to play anywhere on the field. If he can remain at shortstop — even for a few years — his bat will be that much more valuable. If not, he should be one of the best offensive (and defensive) third basemen in the league. His makeup is off-the-charts and he carries himself like a professional. He’s mature beyond his 20 years and could be a fixture in Los Angeles for the next 10-plus years. Keith Law at ESPN and Marc Hulet at FanGraphs ranked Seager as the fifth- and sixth-best prospect, respectively, in baseball. That’s high praise.

And no, Bob Nightengale, et al, the Dodgers didn’t make a mistake by passing on Michael Wacha.

Dustin Nosler began writing about the Dodgers in July 2009 at his blog, Feelin' Kinda Blue. He co-hosted a weekly podcast with Jared Massey called Dugout Blues. He was a contributor/editor at The Hardball Times and True Blue LA. He graduated from California State University, Sacramento, with his bachelor’s degree in journalism and a minor in digital media. While at CSUS, he worked for the student-run newspaper The State Hornet for three years, culminating with a 1-year term as editor-in-chief. He resides in Stockton, Calif.
@DustinNosler
Previous 2014 Triple-A All-Star game: Joc Pederson and not much else
Next Should The Dodgers Trade For Jonathan Papelbon?