Should We Be Frightened About Ned Colletti Trading For A Reliever?

This Dodger bullpen, it is, well, not good. Kenley Jansen isn’t the problem, of course, and neither is J.P. Howell. We’ve talked a few times about how Brandon League is at least adequate; Brian Wilson has been up and down, but obviously isn’t going anywhere with that 2015 player option. Chris Perez has been awful. Paul Maholm hasn’t been much better. Jamey Wright is striking out fewer and walking more. Man, do I miss Chris Withrow.

Needless to say, there’s at least one spot that needs to be upgraded and arguably three. Maybe Scott Elbert takes one of them, but he’s hard to count on after not having appeared in the big leagues since August of 2012. Maybe you really want Paco Rodriguez, Pedro Baez, Yimi Garcia and Jose Dominguez all in the big league bullpen at the same time. That’s great, but we also know that it’s not going to happen. Before the July 31 deadline, Ned Colletti is going to add a reliever. This isn’t inside information, it’s the simple ability to observe the world around you. It’s basically a given, isn’t it?

We can talk about who is available, of course. Daniel did a great job looking into Jonathan Papelbon, and Dustin did the same with Jake McGee, and we could endlessly talk about other options like Antonio Bastardo, Joaquin Benoit, James Russell, Koji Uehara, Andrew Miller, LaTroy Hawkins, Joakim Soria, etc. etc. and on and on. But there’s too many options, and differing opinions of how the team may value them, and so while it’s a fun exercise, it doesn’t always add much. Besides, when I thought about the inevitable trade, I realized my reaction wasn’t, “I wonder who they’ll get.” It was, “I wonder how much we’ll hate what Colletti is going to do,” because we always enjoy laughing at his love for veteran relievers.

But then, I thought about it some more, and I realized I couldn’t tell if that was fair or not. When Colletti has traded for relievers, has it really been that bad? Is it fair of us to be terrified? Fortunately, we have years of moves to go back and check into. I’ve been able to find six different times where the Dodgers traded for a veteran relief pitcher in July since Colletti take over. Let’s remember how they went.

This one went down like three weeks after I first started a Dodger blog. Want to know how long ago that was? I was excited that Tony Abreu and Chin-lung Hu weren’t traded away. (I was also happy that Clayton Kershaw and Matt Kemp weren’t moved, so at least there’s that.) I actually didn’t mind this when it went down, mostly:

I suppose if the bottom line is, “did this trade help the team”, then I would have to say yes. Unless Proctor’s a total disaster, he improves the pen, inasmuch as he fulfills the qualities of “Not being Houlton or Hull” and much as I liked Betemit, LaRoche is a better prospect at 3B. Just a little disappointed that this was all that could be gotten for Betemit, is all.

Proctor, who’d already suffered through Joe Torre in New York — he’d pitched 102.1 innings (!) in 83 games in 2006 — was mediocre down the stretch in 2007, putting up a 4.86 FIP, though with a nicer 3.38 ERA thanks to a .239 BABIP. He was atrocious in 2008, then didn’t appear in the big leagues at all in 2009. Betemit, on the other hand, has been all over the place, bouncing from the Yankees to the White Sox to the Royals to the Tigers to the Orioles, and is currently in Triple-A for Tampa Bay, where he was an All-Star this year. Somehow, he still has a career 104 wRC+ and 2.7 WAR. The Dodgers probably came up on the short end of this one, but it also didn’t matter. 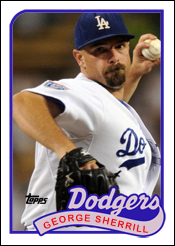 Man, I remember everyone hating this deal at the time. No one cared about Johnson, but Bell was seen as a potential third baseman of the future. I actually loved it:

And really, it’s the fact that it’s Steven Johnson, and not Scott Elbert, who’s joining Bell with the O’s that makes this trade a win and not a disaster. Bell’s a solid prospect, but not a superstar-in-waiting, and you have to expect to give up at least that much. Johnson’s intriguing, but hardly someone you lose sleep over. Elbert’s already shown success at the major league level, and losing him would not only cost his services as a Dodger, but his availability in any possible Roy Halladay trade.

I say that I hate things so often around here that I’m thrilled to be able to take the other side: this is a good, solid trade that’s going to help the Dodgers without killing them in the future. Even better, Sherrill’s only arbitration-eligible, so he can’t just walk away. Job well done by Ned Colletti on this one.

Ha, Roy Halladay trade. Sherrill was phenomenal down the stretch for a team that went to the NLCS, allowing two earned runs in 30 appearances. He was a train wreck in 2010 — this was partially because Torre insisted on using him against righties even after it was painfully obvious that Sherrill was a LOOGY — but Bell never amounted to anything and Johnson ended up just being a depth guy for Baltimore. This one worked out.

Sigh. I truly despised this deal, not just because of the players involved, but because a clearly mediocre team — seven games out in the NL West at the time — had no business making a deal like this. (That they’d also traded for Ryan Theriot and Scott Podsednik wasn’t helping my mood.) Basically, I felt that although Dotel was probably a mild improvement, he was hardly a difference-maker, and to give up two well-regarded prospects for that was insane. Dotel didn’t even finish out the season with the Dodgers, getting into 19 games as the team sunk to five games under .500 before he was dealt to Colorado for basically nothing in September.

Neither McDonald nor Lambo panned out the way we thought they might have, of course, though McDonald at least gave Pittsburgh 435 innings of something like league-average pitching before injuring his shoulder, and Lambo is still only 25 and on his second year in a row of destroying Triple-A. This could have been worse, I guess. It was just never, ever going to work out well.

This one, obviously, falls into a bit of a different category, because Ramirez was the objective here, and Choate was just the throw-in. Choate got into 36 games for the Dodgers, hilariously throwing only 13.1 innings. He wasn’t very good. It doesn’t change that this trade was great, even with Eovaldi showing great promise in Miami.

I feel pretty good about this one, because at the time I said,

Let it be said, quickly, that while I liked both Leon Landry & Logan Bawcom, neither were irreplaceable parts. I dug Bawcom’s ability to miss bats, but the level of failure from minor league relievers is huge, and Landry hasn’t shown he can hit outside of high-offense environments; neither were even among the top-30 Dodger prospects per Baseball Americaentering the season, though that may have changed now since each were doing well. Each clearly had others at their position ahead of them on the depth chart, so to give them up, while disappointing because I liked both, is hardly fatal.

…and, yep. Landry hasn’t progressed past Double-A, where he hit .216/.262/.303 last year. Bawcom had a good year in Triple-A in 2013, but has walked 17 in 25.1 innings this year. I don’t miss either one. League, of course, was awful for his first few months in Los Angeles, then was dominant in September. That makes it a worthwhile deal; that Colletti then signed him to a hilarious three-year contract after that, well, that’s a separate transaction.

This was really a nothing deal, meant less to add Marmol than it was to add international signing money and get Guerrier off the roster. Marmol didn’t add much to the Dodgers, was cut by Miami earlier this year, signed a minor league deal with the Reds, pitched three games in Triple-A, then disappeared. He’s not currently with a team, and his career may be over. Guerrier had elbow surgery, went back to the Twins, spent the first few months in the minors, and is now in their bullpen. Whatever.

So, what’s the outcome here? Colletti made one really bad deal that looked awful at the time and still doesn’t look great now. Several were inconsequential. Not one has really brutally bitten the Dodgers. That doesn’t mean we can’t still live in fear of, say, Zach Lee for Jim Johnson. But maybe Colletti’s July track record of going after relievers isn’t so bad. Now, when Matt Kemp gets traded to Boston…

Mike writes about lots of baseball in lots of places, and right now that place is MLB.com.
@mike_petriello
Previous Pirates 12, Dodgers 7: The Dumbest Game In The History Of Baseball
Next Dodgers’ answer to finding a bat at the deadline: Alex Guerrero