Hyun-jin Ryu was really, really good tonight, cruising through six innings before getting touched for a pair in the seventh, and that’s sort of what worried me. Again, another somewhat unknown pitcher — this time, Chase Anderson — had shut down the Dodger offense, allowing Adrian Gonzalez‘ 20th homer of the year in the first, but little else. The way Ryu pitched, especially after working out of a bases-loaded jam early in the game (helped in part by a nice Carl Crawford play in left), he deserved to leave with a big cushion. Instead, he left the score tied, having given up the lead. Just once, really, it would be nice to see a huge offensive explosion. It’s been too long.

Fortunately, this had a happy ending. Wait, hang on, Brian Wilson is here to murder your family: 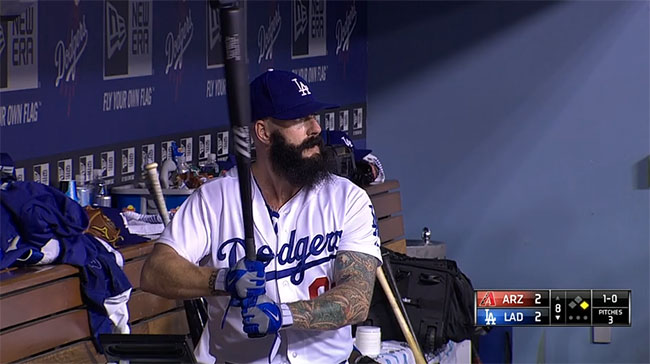 Wilson, despite his well-known recent issues, managed to get through an easy top of the eighth, setting the stage for the Dodgers to do something fun. Juan Uribe got on via an infield hit, and he was run for by Roger Bernadina, making his Dodger debut after being activated unexpectedly today. We were told that his role is basically to pinch-run, and that paid off immediately: after Joc Pederson flew out to left (just barely missing his first home run), pinch-hitter Justin Turner grounded out to third. But Aaron Hill went to second and underestimated Bernadina’s speed, and both runners were safe.

With two on and two out after Andre Ethier flew out, that put Dee Gordon, who has been struggling badly for weeks, in a position to make a difference. With the final pitch of a nine-pitch battle against Daniel Hudson, Gordon’s third hit of the day went up the middle, scoring Bernadina for the go-ahead run. Gordon seemed excited. I’m not really sure:

Arizona brought in Will Harris, and Hanley Ramirez immediately plated both Gordon and Turner by hitting a ball that seemed to be lower than his shoelaces for a ground-rule double to left field; fortunately, the goober Dodger fan who interfered with the ball didn’t cause any serious damage. Kenley Jansen allowed a Nolan Reimold double but otherwise had smooth sailing through the ninth — reminder that he’s still really, really good — and the Dodgers maintain their two-game lead over the Giants. Just like they drew it up, right?