This is definitely the kind of thing that’s going to come back to bite me when the Dodgers sleepwalk through the rest of this week against the Rockies and Cubs and find themselves not only not in a position to clinch the division against the Giants next week, but needing some big wins to stay in first place:

That’s really how I felt about this game, which was a generally forgettable display all around. Dan Haren did his usual “I’m going to be bad, but not so bad that I get knocked out early, instead showing enough not-bad around the bad that I can semi-bad myself to that 2015 option,” which wasn’t particularly surprising, not that the umpire really helped, and the Dodger offense couldn’t time their hits right against Tyler Matzek.

This is sequencing to a tee, of course. They had multiple hits in the third, fourth, fifth and sixth innings, but just not enough of them in a row — or not enough of which were for extra bases — to actually push any runs across. It’s not that Matzek dominated, though he did well to avoid walks and homers, it’s just that the timing fell his way tonight. That’ll happen, unfortunately. The regular fan will claim it’s because the Dodgers didn’t show “heart” or “passion.” The regular fan doesn’t read this site. You do. You know better.

One exception there came in the sixth, when Justin Turner, swinging on a 3-0 pitch, doubled to center, scoring Matt Kemp and Scott Van Slyke. Juan Uribe followed with a hit of his own, and when third base coach Lorenzo Bundy sent Turner on a questionable decision, this happened:

I was happy that Turner actually ran over the catcher rather than attempting to go around, because the loophole in Rule 7.13 all along has been that by going around, it’s difficult to say that the catcher actually got in your way. Turner bowled over Michael McKenry. The play was reviewed. Turner was still out. I don’t get it. I’ve long been in favor of the idea that catchers put up with enough abuse on a daily basis that they don’t also need to get their brains scrambled by guys who could be NFL linebackers, and so far no catchers have been blown up this year. That part is working, and that’s why the rule won’t be going away. This, though… well, it’s still not clear. I’m terrified about this in October.

Anyway, A.J. Ellis walked — of course — and then Hanley Ramirez, who had been scratched with a sore elbow, came in against Tommy Kahnle. He struck out, and so did Yasiel Puig, after Dee Gordon got an infield hit to load the bases. The Dodgers wouldn’t score again for the rest of the game.

I’d like to pretend nothing happened after this point and just finish this off, but, well there was that one thing. No, not Brandon League, because while his line looks bad, one of his two walks was intentional, and none of the balls he allowed were particularly hard-hit. You know what I’m talking about: Gordon making what might just be the play of the year to start this double play that ended the sixth:

Oh, and Daniel Coulombe made his debut. Look, here’s proof: 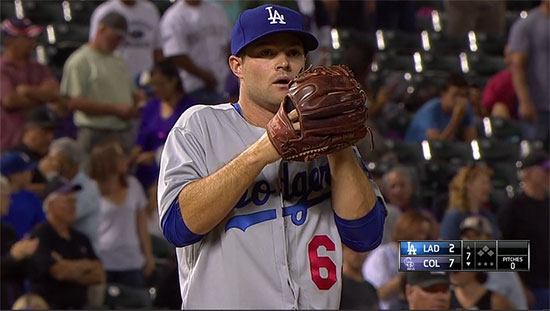 He got through a scoreless inning, striking out one. Good work.  Then Jamey Wright and Yimi Garcia made it a lot worse, before Puig made us all feel really, really better by hitting his first home run since 1973. (Probably.)

But… whatever. Really. You can’t expect to sweep every series, and I think we all knew that the Roberto Hernandez / Haren / Carlos Frias gauntlet through Coors Field was going to be a tough one. Just need to do better in tomorrow’s matinee, I suppose.

Mike writes about lots of baseball in lots of places, and right now that place is MLB.com.
@mike_petriello
Previous Dodgers @ Rockies, Sept. 16, 2014: Dan Haren Needs 11 Innings
Next Dodgers set to finalize all minor-league affiliates through 2016